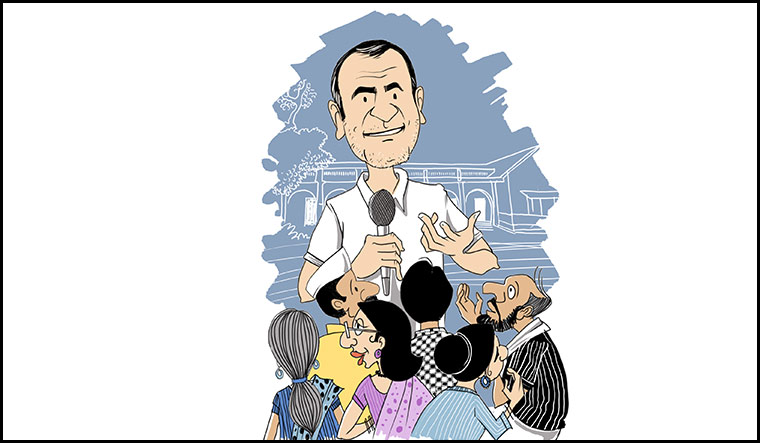 The first halt of the yatra was the 101-year-old S.M.S.M. Higher Secondary School in Kanyakumari. Mahatma Gandhi and C. Rajagopalachari visited the school during a trip to the erstwhile princely state of Travancore in 1937. That trip was to celebrate the implementation of the temple entry proclamation that lifted the ban on so-called “lower castes” entering temples. Rahul met dalit activists and a few students.

During an interaction with students at Dr G.R. Public School in Neyyattinkara, Kerala, a girl asked Rahul what his advice would be for youth who want to enter politics. After thinking for a moment, he answered: “Do not spread politics of hate. That is the way politics is done today. That is easy. Practise the politics of inclusion, compassion and love [which is harder].”

The yatris were served vegetarian food in Tamil Nadu. It was “80 per cent south Indian and 20 per cent north Indian”. The food and service team in the state had around 100 people working in three shifts, in three groups. Every day, they would dismantle and shift the kitchen. One of the proprietors of Sarva Shree, the catering company, said they had never done anything like this. Catering teams in other states better be ready for the daily grind. 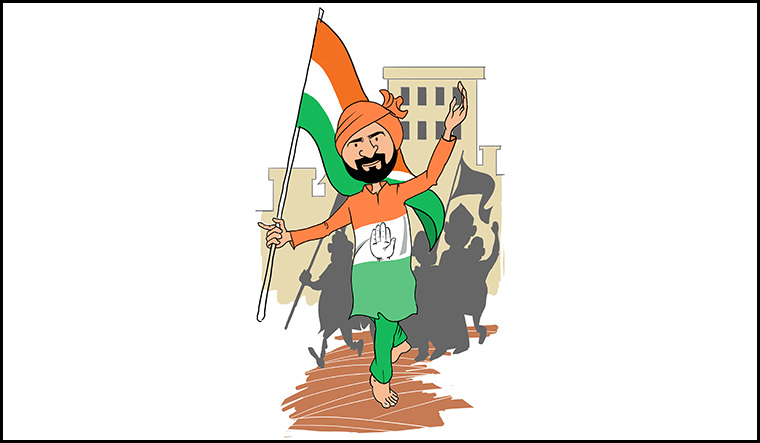 Dinesh Sharma, 28, from Jind, Haryana, calls himself a “permanent yatri” for Rahul. He has attended all of Rahul’s major rallies and roadshows since 2011. At the yatra, he can be seen walking barefoot, waving the tricolour and wearing a saffron turban and a specially-designed kurta with the words “Rahul Gandhi The Warrior” printed on it. Sharma, a law graduate, has taken an oath: He will not use footwear till Rahul becomes prime minister.

There is an effort from the Bharat yatris to be conscious of the cultural and linguistic sensibilities of states. They greeted people using the Tamil word vanakkam during the Kanyakumari stretch and the Malayalam word namaskaram in Kerala. They raised slogans in Tamil and Malayalam, along with slogans in Hindi, and the Congress also released yatra anthems in Tamil and Malayalam.

There are 119 Bharat yatris, who will accompany Rahul all the way to Kashmir. These yatris were given a three-hour training session by the Congress Sevadal, the party’s grassroots frontal organisation. They were told not to smoke, drink or complain about anything, including stay and food. They have also been advised to wear only white. It seems that walking behind Rahul Gandhi demands following in the footsteps of Mahatma Gandhi.

While Rahul interacted with a group of MGNREGA workers in Kanyakumari, a lady in her 50s, from Killiyoor panchayat, asked him whether he could marry a girl from her locality and become Tamil Nadu’s son-in-law, just like Sonia became India’s daughter-in-law. A Congress worker who was present, S. Mary Stella Bai, told THE WEEK: “Rahul ji smiled and said ‘Let’s see if the circumstances allow’.” 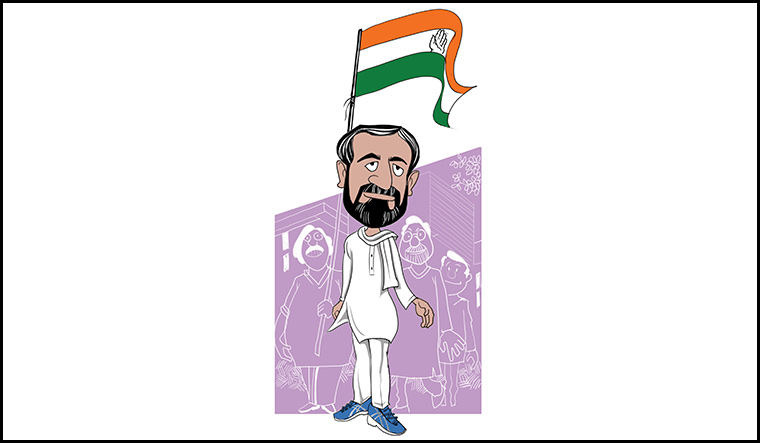 The Congress hopes to unite anti-BJP forces with the Bharat Jodo Yatra. Academic-turned activist Yogendra Yadav was one of the first people (excluding Congress leaders) to respond positively to the idea. And he is walking his talk. Yadav was spotted among the yatris in Kanyakumari and Kerala. He was also wearing a pair of ASICS shoes—the same brand used by Rahul Gandhi.

The CRPF and state police forces have joint responsibility for security. Rahul, who has Z-plus security cover from the CRPF, walks amid a multi-layered security formation—state police in the outer rings and CRPF personnel in the inner ones.

In Kanyakumari, 500 to 700 policemen were deployed. Around a hundred of them were walking with the padyatra. Last year, during a Kerala visit, Rahul shocked security officers by jumping into the sea with fishermen in Kollam. “The leaders themselves can be a threat to their security at times,” a Kerala-based security officer told THE WEEK.

The translator who didn't translate 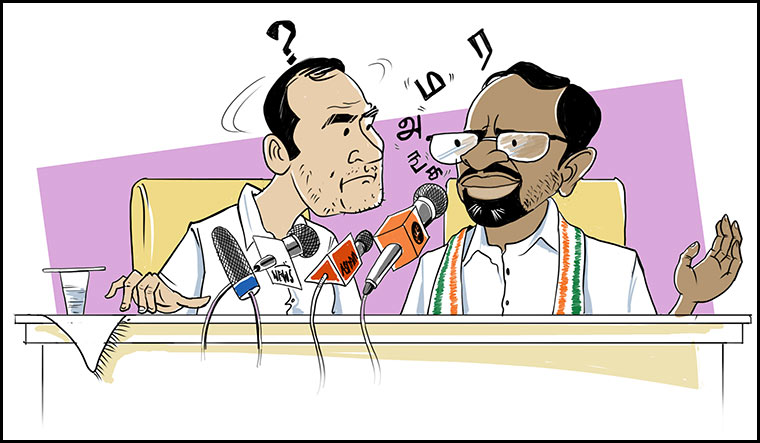 Rahul held a news conference at one halt in Kanyakumari. He was asked questions in Hindi, English and Tamil. Congress leader and Thiruvallur MP K. Jeyakumar translated the Tamil questions. After a particularly long question, Rahul said he should probably learn Tamil himself. Shortly thereafter, Jeyakumar seemed to forget that he had to translate and posed the question to Rahul in Tamil, setting off gales of laughter from the crowd.

Viral fever? Walk it off! 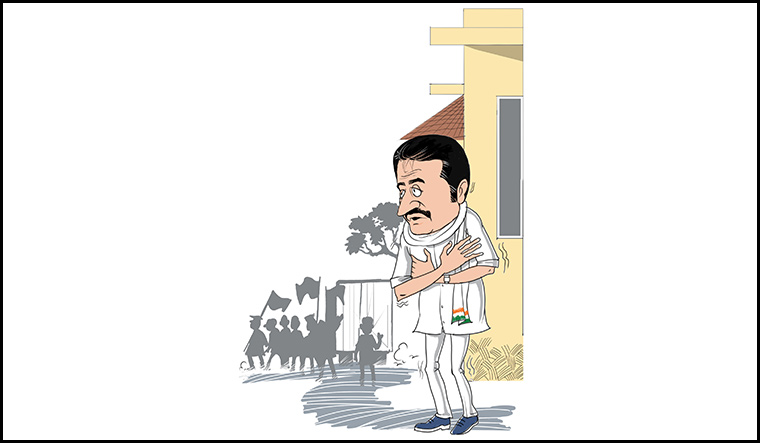 K.C. Venugopal, Congress general secretary (organisation), was down with viral fever a week before his party started its ambitious yatra. Though he had not recovered fully, he could not show weakness when his party was trying to show strength. So, he walked. Unfortunately for him, Rahul is, apparently, a fast walker. “It is tough, but we are trying hard to match his pace,” Venugopal told THE WEEK.

Before the start of the inaugural public meeting at Kanyakumari, there was a spat between the police and young Congress workers who wished to have a seat closer to the dais. A few workers jumped the barricade and the police used force against the group’s leader. Eventually, senior leaders resolved the issue and the youngsters got their wish. The leadership can perhaps feel happy that it still has many “aspirational” youngsters in its fold. 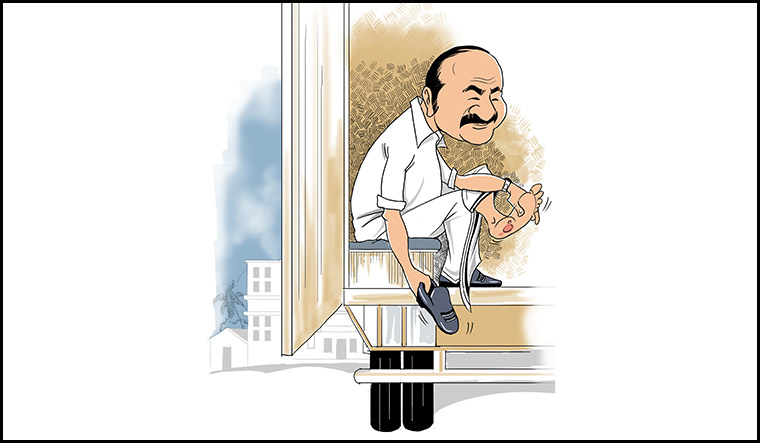 Kerala’s opposition leader V.D. Satheeshan was half-padyatri and half-vanyatri on September 12. He developed a painful blister and had to stop walking. He continued the rest of the day’s journey in a pickup van, which was being used as an announcement vehicle. Satheeshan had also missed a part of the yatra earlier in the day as he had to attend a special assembly session to elect the new speaker.

Love and a white lie

The Bharat yatris would be away from their families for over five months. Vaibhav Walia, a young Congress leader from Uttarakhand, told THE WEEK that his mother was “very angry” that he would be away for so long. “‘You are going to miss Diwali and New Year,’ she told me. But I am sure she will come around,” said Walia. To console her, he said that he might come and visit in between the yatra. “But you know that I will not go,” he said. 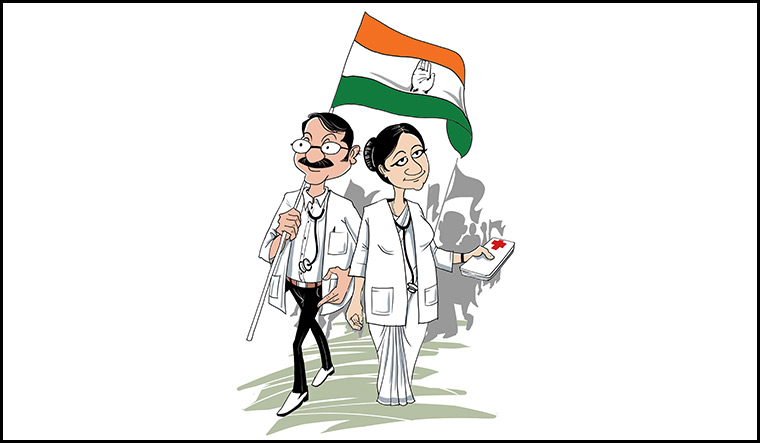 Though the overarching message of the yatra was unity, the Congress may have irked the CPI(M) when its leaders in Kerala arranged an interaction between Rahul and people protesting K-Rail—seen as a pet project of Chief Minister Pinarayi Vijayan. The Congress’s idea is to treat the CPI(M)’s central and state leaderships as separate entities. “Kerala CPI(M) has a different kind of politics,” Venugopal said in response to a question by THE WEEK. “Congress is the principal enemy for both the CPI(M) and the BJP. So, they are on the same page. You can see that from what the CPI(M) is doing.”

(So many) small steps

An average yatri walks over 34,000 steps a day. Every day, the yatris cover around 20km in two phases. The first phase (12km-14km) typically starts at 7am and is used for public outreach. During the break (10am-4pm), as other yatris rest, Rahul interacts with civil society organisations, activists and religious leaders. The second phase (6km-8km) starts at 4pm and is more aligned towards engaging with party workers.