He says Delhi liquor policy is the best in the country 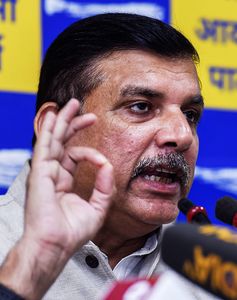 Q. What is the political impact of the CBI probe into the alleged irregularities in Delhi's excise policy and the role of Deputy Chief Minister Manish Sisodia?

A. There is no truth in the allegations. The real intent of the Central government became clear when Manish Sisodia revealed that he was approached by the BJP and an offer was made that he would be made chief minister and the cases against him would be dropped if he split the AAP and joined the BJP.

Q. So it is much more than vendetta politics.

A. The Modi government has been vindictive from the very beginning. During the Kejriwal government's first term, the chief minister's office and the deputy chief minister's residence were raided. As many as 450 files were scrutinised by the Shunglu committee. But nothing came of it. Nearly 40 MLAs were arrested and almost all of them were acquitted. The police even took the dog of our MLA Somnath Bharti into custody to check his jaw. The investigating agencies are being used to harass us, and now an attempt is being made to use them to carry out 'Operation Lotus' in Delhi, but it ended up as 'Operation Bogus'.

Q. Who in the BJP approached Sisodia?

A. Who in the BJP approached Eknath Shinde? Who approached Jyotiraditya Scindia? Who approached Mukul Roy? They have not revealed it. They just jumped ship. However, Manish did not remain silent. He came out to expose the BJP.

Q. There are questions about waiving 0144 crore to private licensees under the new excise policy.

A. If you look at the FIR registered by the CBI, all the figures that are being talked about find no mention. As for waiving Rs144 crore as licence fees, it was done because of the impact of Covid on businesses. These licensees had even filed a petition in court about not being able to pay the fees as their establishments had been closed. The MCD (Municipal Corporation of Delhi) waived Rs85 crore owed by toll operators, and another Rs100 crore with regard to outdoor advertisements. Why was not a CBI probe ordered into it?

Q. Then why was the new excise policy withdrawn?

A. We stand by the new excise policy. It is the best in the country. However, our political opponents were hell bent on ensuring that it did not take off. In the beginning, there were protests about liquor vends being opened. Due to the last minute decision taken by the previous lieutenant governor to make it mandatory for licensees in non-conforming areas to take permission from civic authorities, the number of vends that opened was less than what was intended under the policy. And then, when there was a shortfall of revenue, the policy was faulted for that.

Q. You said the recent developments have made it clear that the 2024 general elections will be 'Kejriwal versus Modi'.

A. Actally, we do not have to say it. Modi himself has made the declaration through his speeches and his actions. By calling pro-people measures revdi or freebies he has made it clear that he sees Kejriwal as his opponent. By trying to target AAP leaders and ministers he has made it clear whom he fears.

Q. Your political opponents, however, will remind you about the AAP's failure in the 2014 and 2019 parliament elections.

A. A lot has changed. Our victory in Punjab has proved that people are ready to look at the AAP as an alternative. We are in power in two states. We have two MLAs in Goa. We have made our presence felt in local body polls across the country. We are putting in place a sizeable ground presence in states like Uttar Pradesh, Uttarakhand, Madhya Pradesh and Rajasthan. Now, a big change will take place in Gujarat.