Growth has been inclusive and individual income has tripled 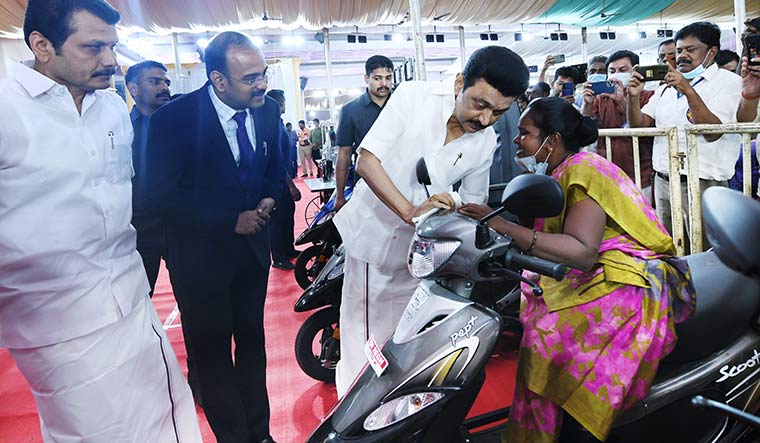 Helping hand: M.K. Stalin at a welfare event in Coimbatore on August 24.

A 23-year-old domestic help, Rukmani Sukumar feels that her life has improved in the past eight months. A resident of Kannagi Nagar near Chennai, she used to spend around Rs150 a day to commute to work. Now she saves the money, thanks to a government scheme that allows women to travel for free in public buses. “My husband is no more, and there is no support to raise my children,” says Rukmani. “The savings help me buy them books.”

Finance Minister Palanivel Thiaga Rajan said the scheme has “profoundly changed” the lives of employed and college-going women, who make up 40 per cent of bus passengers in the state. “It empowers them to travel without asking anyone’s permission,” he told THE WEEK. “Women’s participation in the economy and social activities outside their homes has profoundly improved. It has had a bigger impact than we thought.”

Welfare schemes and doles have long influenced Tamil Nadu politics. In 1967, when hunger was a major issue, C.N. Annadurai of the DMK became chief minister riding on his promise of ‘One rupee for one padi (litre) rice’. The DMK government soon found out that the promise was expensive and unsustainable, but the welfarism continued.

After he became chief minister in 1977, M.G. Ramachandran of the AIADMK modified an existing mid-day meal scheme to attract children to school. His successors such as M. Karunanidhi of the DMK and J. Jayalalithaa of the AIADMK further polished the scheme, ensuring that more children enrolled in schools. The current DMK government, under Chief Minister M.K. Stalin, has now extended the scheme to include breakfast as well.

“[The measure] could further burden the exchequer, but consider the future. You could ensure demographic dividend by providing meals to schoolchildren,” said S. Janakarajan, former professor at the Madras Institute of Development Studies.

From mid-day meals and free uniforms and sandals, the scope of freebie politics drastically grew in the run-up to the 2006 assembly polls. The DMK came out with a manifesto that promised colour television, cooking-gas connection and stoves for poor households, and free power and loan waivers for farmers and weavers. The manifesto helped the DMK come to power.

Jayalalithaa, who as leader of the opposition had criticised Karunanidhi for using doles to “enslave” voters, also joined the freebie bandwagon in 2011. Her party distributed mixers, grinders and fans, helping her become chief minister. She retained power in 2016 by promising free bicycles, gold for mangalsutras, and subsidised scooters.

Interestingly, despite spending high on freebies and populist schemes, Tamil Nadu has maintained inclusive growth over the decades. Per capita income has gone up from less than Rs20,000 in the late 1960s to Rs60,000 in 2012.

According to P. Pugazh Gandhi, lawyer and coordinator of the Dravidian Professionals Forum, welfare measures could differ from state to state. “In the desert regions of Rajasthan, it could be drinking water,." he said. "In Kerala, it could be fiscal incentives to encourage entrepreneurs. In Tamil Nadu, it is educational or marriage assistance, and free bus passes to ensure women empowerment. It is up to the legislature or the executive to formulate welfare measures for a particular region.”