He needs to win over the Conservative Party members 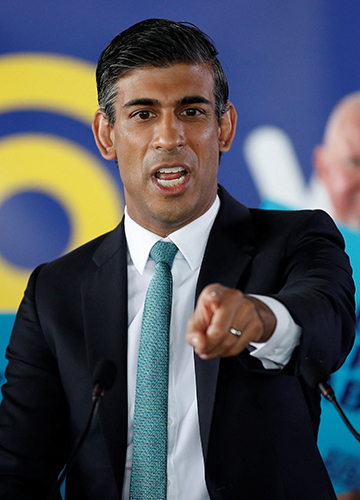 Rishi Sunak, the man who could be Britain’s next prime minister, has many nicknames. He is called “Dishy Rishi” because he was voted Britain’s “sexiest” MP. “Fittest” would have been more appropriate for the 42-year-old, but then the rival he beat for this dubious distinction was the middle-aged Labour Party leader Keir Starmer. He is called “Snake Sunak” by outgoing prime minister Boris Johnson’s supporters for being “disloyal” and resigning as chancellor of the exchequer (finance minister), thus precipitating Johnson’s downfall. He is also “Rishi Rich” after the cartoon character “Richie Rich” because he is so rich. His wife, Akshata, is even richer. She has a 0.91 per cent stake in Infosys, founded by her father, N.R. Narayana Murthy. It is worth £700 million, making her richer than the queen.

The two rivals vying for Conservative Party leadership to succeed Boris Johnson are Sunak and Elizabeth ‘Liz’ Truss, 47, the current foreign secretary who projects herself as Margaret Thatcher 2.0. Assessing the two gladiators, Malcolm Rifkind, who served in the cabinets of Thatcher and John Major, says, “Compared with Johnson, Sunak demonstrated a high degree of competence, integrity, and bold but sensitive leadership. Truss has no powers of oratory, little use of humour and no obvious charisma. However, she is seen as gutsy and determined.” Long ago, one of her three younger brothers said that Truss was so competitive as a child that she would abandon playing family board games rather than risk losing. She has described herself as the “bossy elder sister”.

Who becomes Britain’s new prime minister on September 5 depends not on British voters, but on 1.6 lakh Conservative Party members—mostly middle-aged, well-off, white men. This “selectorate” of Tory members, constituting barely 0.3 per cent of the 64-million-strong British electorate, live predominantly in the south of England, the la-la-land of Brexiteers. They favour Truss, though Sunak got more votes from the MPs.

Ironically, Truss was against Brexit, while Sunak campaigned for it from the time he was 16. Once Brexiteers won, “Turncoat Truss” switched sides, as she has done frequently in the past. The passion of the neo-convert pleases the Brexiteers, a disruptive, guerrilla bloc within the party. Author Nick Harkaway analyses: “Brexit is a mood, not policy. The mood is characterised by ‘flight from facts’.” In the view of BBC Radio’s Jonathan Freedland, “Truss is the true Brexiteer in this contest because she subscribes to magical thinking. Truss is not continuity Boris; she is continuity Trump.”

No matter who wins, Britain’s policies on Brexit, the European Union, Northern Ireland and the Ukraine war will broadly remain the same. The difference is in the tone. Sunak is measured, while Truss is hawkish, projecting herself as a right-wing, radical Conservative, harsh with the EU, hard with Putin, tough with China, but gung-ho on NATO.

Outside the Brexit bubble, analysts savage Truss while expressing grudging admiration for Sunak. Journalist and author Simon Jenkins says Truss is “a cliched, pseudo-right-wing Tory, with no originality. Her attempts to mimic Thatcher have been childishly embarrassing. Sunak may also lack experience, but his performance at the treasury during Johnson’s nightmare premiership suggests a man of sound judgment, caution and competence.” But Welsh journalist Zoe Williams sees both as “eccentric propositions—one rich and boring, and the other vain and superficial.” 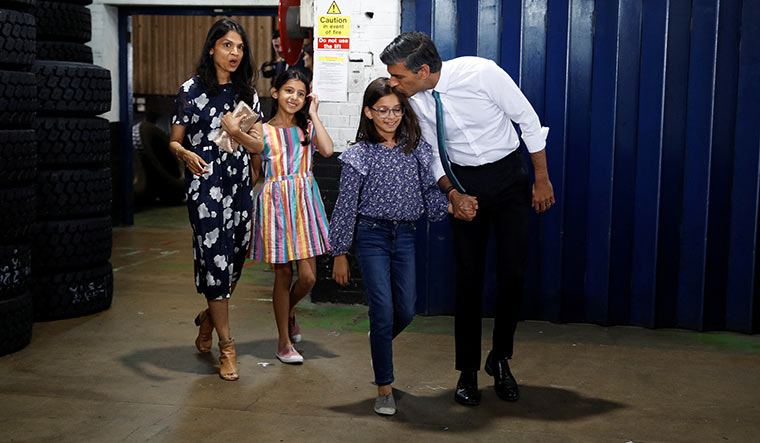 Family man: Sunak with his wife, Akshata Murthy, and their daughters, Anoushka and Krishna | Reuters

As Conservatives, both Truss and Sunak support small government, big business and low taxes. The crucial difference is on tax. Sunak plans to cut taxes after inflation is controlled, a plan supported by most economists. Truss panders to the Brexiteers’ all-time top priority—embedding a low-tax regime to benefit the 1 per cent richest, while the rest suffer and “eat cake”. Truss promises to immediately cut taxes worth £34 billion and deregulate and hike defence expenditure. Part of her “magical” economic thinking is silence on how to raise funds to meet the increased expenditures. Political economist Sahil Dutta asks, “The UK is already an outlier for its low corporate, income and capital gains tax. How would further cuts transform living standards now, when they haven’t in decades?”

Quoting her adviser Patrick Minford, Truss claims her unfunded tax cuts are not inflationary. Brexit guru and economist Minford had forecast that Brexit would increase GDP by 7 per cent, lower food prices and deliver an extra £135 billion annually to the UK economy. Instead, it suffered an £80 billion loss. Says Freedland, “It is the fantasy economics that proves Truss has been drinking the spirit of Brexit, neat.” Sunak promises to end these “comforting fairy-tales”. 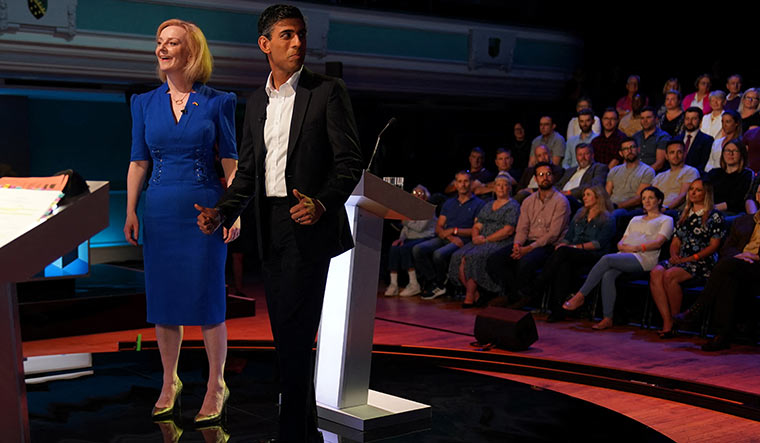 Fight to the finish: Sunak and Truss at a leadership debate hosted by the BBC | Reuters

Truss also praises Johnson’s unilateral repeal of Britain’s treaty with the EU, apparently blind to the EU’s subsequent legal proceedings against the UK for its failure to implement the Northern Ireland Protocol. The EU’s reintroduction of border checks led to six-hour queues of food trucks in Dover. Satirist John Crace describes Truss as an “ideologue without ideas. “Hers is a journey without any ideas or purpose other than to rise to the top.”

Sunak’s journey, meanwhile, has been remarkable. His grandparents migrated from Punjab to Africa, and his parents—father a doctor, mother a pharmacist—migrated to the UK in the 1960s. Like good Indian parents, they toiled and invested in their children’s education. “My parents sacrificed a great deal so I could attend good schools,” says a grateful Sunak. Like a good Indian son, he studied hard, earned extra money working as a waiter in a curry house, became the head boy in Winchester College, excelled in Oxford and won a scholarship to Stanford where he met his wife. Leading lady: Truss with supporters at a campaign event in Kent | AP

Sunak’s accent is British, but his face, skin and culture are Indian. As MP, he took his oath on the Gita. He does not eat beef, but loves bacon and soccer. “I’m a Hindu,” says Sunak. “During weekends, I am at the temple but also at the soccer game. You do both, you do everything.”

While he was at Oxford—that perennial petri dish for future British prime ministers—classmates joked that Sunak would one day become a Conservative prime minister. Evidently, Sunak did not see it as a joke. But he started his career as an investment banker at Goldman Sachs and became a multimillionaire in his 20s. His flair for money eventually catapulted him to chancellorship— bringing tremendous power, but less money with a government salary of £1,51,649.

His fast-track political career began by winning the parliament seat in 2015 from Richmond, North Yorkshire, a Tory bastion. He replaced former foreign secretary William Hague who calls Sunak “an exceptional individual”. But his wealth attracted attacks and scrutiny, with Labour politicians alleging he used tax havens and had financial conflicts of interest. The treasury, however, cleared him of any wrongdoing.

But Sunak was skewered for his disloyalty in keeping a US green card, which he finally surrendered. His wife was roasted for declaring herself non-domicile to avoid paying taxes on her $11 million annual income. Eventually, to defuse the scandal, she paid $2 million in taxes. Deviating from the typical immigrant story, the Sunaks’ wealth exceeds even rich Britons. They own a manor house in Richmond, a flat and a five-bedroom townhouse in South Kensington in London and a penthouse with views of the Pacific in Santa Monica, California. He currently lives in a taxpayer-owned flat at 11 Downing Street and a government mansion in Buckinghamshire.

Sunak projects a homey, “ordinary people” image, interacting with the elderly, children and housewives, playing ball and eating cake in local communities. It is hard for “Rishi Rich”. With his international lifestyle and properties, voters see him as a “citizen of nowhere”, that catchy phrase coined by former prime minister Theresa May. With his £3,500 suits and £490 Prada shoes, “Sachs Sunak” is a mascot for the slick, hi-tech, high-finance global elite. Some say his designer clothes matches his “designed” behaviour. Says a Tory politician, “He can do affable when the cameras are on. When it’s off, it’s all this ‘master of the universe’ stuff.” Still, Sunak goes about conveying heartfelt concern for ordinary, inflation-suffering Britons.

Yet, racism is ever-present, somewhat similar to the campaign against Sonia Gandhi becoming prime minister. But Britain also values good education and excellence. Sunak commands impressive support among the British establishment. “I know that Rishi has got what it takes to provide the leadership we need to steer the country through tough economic times,” says Deputy Prime Minister Dominic Raab. In 2019, 88 per cent Britons said they were “comfortable” with an ethnic-minority prime minister. “Rishi is one of the most decent, straight people with the highest standards of integrity that I have ever met in British politics. And that is why I would be proud to have him as my next prime minister,” says former foreign secretary Jeremy Hunt.

Television debates are misleading as both contestants project personas crafted by their spin-doctors. Sunak has been fact-rich, but repetitive and annoyingly combative. Truss was unhurried, but shallow. Sunak is more qualified than Truss, but the Brexit poster girl is ahead in party polls. It was no coincidence that cabinet colleague Jacob Rees-Mogg, the Tory Brexiteer-musketeer, was by Truss’s side when she announced her candidature. As the ousted May discovered, Rees-Mogg and his troops make powerful allies and deadly enemies. They are part of the Boris Brigade. Johnson hates Sunak for his competence and for “betraying” him. Most people detect malice and vendetta in his “Anyone-but-Sunak” campaign.

Sunak’s “Ready4Rishi” campaign promises to “restore trust, rebuild the economy and reunite the country”. Says Rifkind, “The general public is ready for Sunak, but I’m less certain that Conservative Party members will follow him.” “Unless he appeases them with ministership if he wins, Sunak will face constant sniping from the Rees-Mogg squad. Come September, their weapon “Torpedo Truss” will determine if it’s “Rising Rishi” or “Sinking Sunak”. 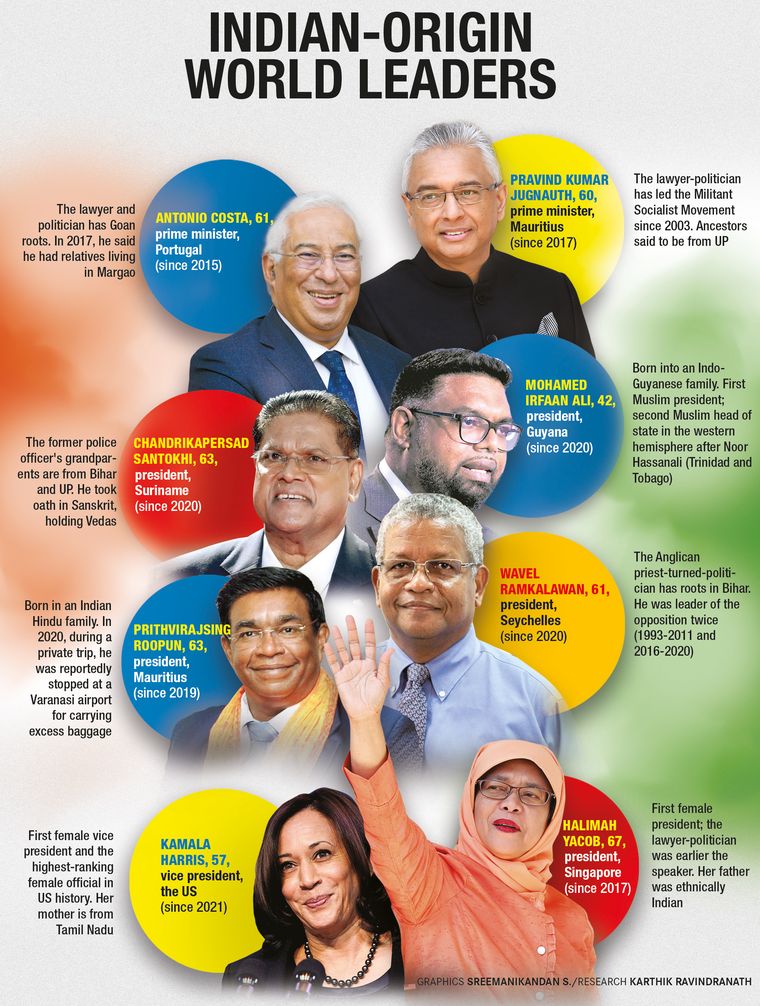