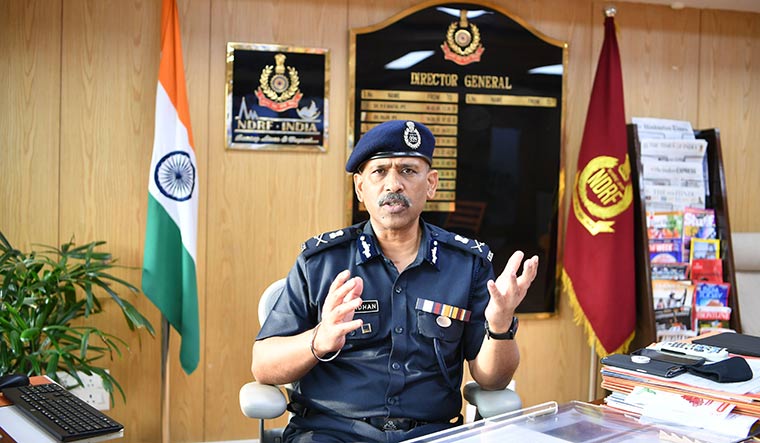 Facing criticism over the handling of Bollywood drug cases like the Aryan Khan case, Narcotics Control Bureau Director-General S.N. Pradhan said a debate has been triggered on whether personal consumption should be de-criminalised. “A view is gaining ground to de-criminalise personal consumption up to a certain limit,” he said in an exclusive interview with THE WEEK. But he warns that such a move will face an equally strong backlash from many parts of the country.

Q\ How big is the domestic threat from narcotic drugs?

A\ India is a supply, demand and transit country. So, on all three counts, it is a massive market. We have around eight crore to 10 crore [drug] addicts, and even if they are casual, it is a huge number. All drug syndicates in the world would like to tap this market. We recently discovered that precursors made in India are used in Mexico to treat the cocaine which comes out of Colombia and Mexico. A foreign agency also warned us about Mexican cartels trying to send representatives to India to buy precursors because there has been some regulatory action in China.

Q\ How are opium-producing states handling the dangers of illicit cultivation and smuggling?

A\ Licensed opium is supposedly for the pharmaceutical industry or producing regulated products. Like any other regulated process, there is a threat of siphoning off, and there is no reason to believe that it is not happening. The next big concern is that there is not a sustained market for it anymore, especially after the pandemic. So, even though licensing is happening, the movement of regulated products is not taking place, which is a huge disincentive for opium farmers. So, they have every [reason] to divert it. It is not a good sign.

Q\ Which are the most preferred routes for smuggling narcotics?

We must not forget that the Afghan opium stock is at an all-time high. There is already a stock lying unused and more stock is being produced. It will be heading towards India because it is the nearest big market. There are other strategic and geopolitical reasons for enemies of India to tap into this market to destabilise the country.

The Covid situation has added another dimension to the illicit drug trade involving parcels, cryptocurrency and the dark net. It is a sinister and deadly combination that is going to increase in future and we do not have the training or the wherewithal to handle it, yet.

Thirdly, the land route is also going strong in Punjab, Jammu and Kashmir, and Rajasthan. There are regular intelligence inputs of elements in Punjab with likely terrorist connections running drug syndicates with connections across the border [in Pakistan] and to North America.

Q\ What steps are you taking to tackle collusion between law enforcement agencies and drug syndicates?

A\We are very careful now on the selection of officials who are coming into agencies like the NCB. We are also doing our counter-intelligence. In a dark net case, one of our constables was arrested. So, we are acutely aware of the situation.

For instance, in states like Assam, an example is being set by catching those who are involved. With marine drug trafficking increasing, the government is already thinking of scanning [all] containers. It is a massive task with high costs involved, but we are adopting best practices from across the world. The NCB is also creating its narco-canine pool to help states and ports. The Mundra [port] drug haul by the Directorate of Revenue Intelligence was a result of the use of data analytics where threat perception analysis was done through machine learning and artificial intelligence.

Q\ There has been a problem with the handling of some cases by the NCB, especially involving Bollywood.

A\ We do self-introspection, but it is not as if every case is a mistake. Every case is a learning curve. Despite everything, the conviction rate of NCB for NDPS (Narcotic Drugs and Psychotropic Substances) cases is 90 per cent or more. In a recent case, the NCB went into the high seas with the Navy for the first time resulting in a massive seizure of Rs22,000 crore worth of hashish. The cases that have come into the limelight are those involving consumption quantity. But it is not the first time this issue is being highlighted. Ever since the NDPS Act was enacted, questions are being raised about its strictness. So, it is not as if courts have only come down on the process adopted by the NCB or state police. There have been more pronouncements in favour of the strictness of the NDPS Act than against it. So, it does not mean that mere consumption becomes a bailable offence.

Q\ Is the government thinking of amending the NDPS Act to decriminalise the possession of small quantities of drugs?

A\ There is certainly a debate and discussion about whether consumption [in limited quantity] can be decriminalised. A process is under way which may take some time. In some countries, the threshold has been devised where up to a certain point it is decriminalised and beyond that, it is punishable with a higher intensity.

I can assure you, that if we go on to decriminalise personal consumption, it will have an equally strong backlash from many parts of the country. What happens to a person who consumes regularly within a personal consumption limit, but is still an addict who can harm himself, his family and society. Are there enough rehabilitation institutions and is the process effective?

Q\ How should the law deal with casual addicts?

A\ There is no such thing as a casual addict, because in every casual addict there is a potential dependent addict. I am not saying we cannot decriminalise personal consumption if we create systems for it already laid down by law.