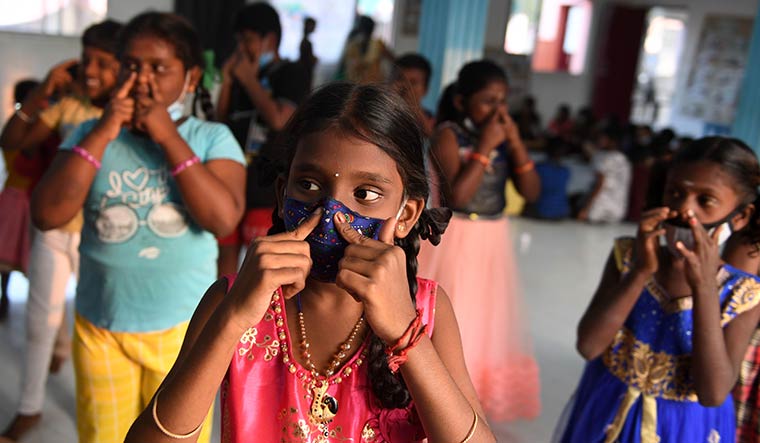 Fun learning: Children of Buddavedu area on the outskirts of Chennai participate in a special class conducted at a Buddhist meditation centre as part of the Illam Thedi Kalvi project | Bhanu Prakash Chandra

CHILDREN SIT TOGETHER and fold pieces of paper to create shapes. One child makes a model of a bird and calls it a parrot; another makes an identical model and calls it a sparrow. A third child sticks his creation to a toothpick and tries to tell a story. There are around 60 children in all, and all of them are gathered in a large meditation hall at the Buddhist centre at Erandam Kattalai near Kundrathur, on the outskirts of Chennai. Laughter fills the air as they play and learn together—something they had not been able to do since March 2020, when schools were shut because of the pandemic.

Volunteers Kavitha Murugan and Ashwini Selvaraj are busy singing, dancing and running around the hall with the children. “Let’s sing the finger rhyme,” says Kavitha to the group near her. At the other end of the hall, Ashwini talks to her group about birds. The hall has become a makeshift classroom, helping children learn at least a part of the lessons that they have missed. The exercise is part of the state government’s ambitious project called Illam Thedi Kalvi (Education at your doorstep).

“The learning gap caused by the pandemic is huge,”says Ashwini, a certified trainer. “For upper-middle-class or middle-class children, gadgets are affordable. But what will the other children do to get back to school? I try to bridge the learning gap.”

Kavitha and Ashwini are among the several thousand volunteers hired by the Tamil Nadu school education department under the Illam Thedi Kalvi scheme, which is aimed at offsetting the learning losses caused by the pandemic.

A survey carried out last year by the DMK government found that at least 1.84 lakh students had dropped out of school during the pandemic. Families in many hamlets had left their homes in search of jobs, taking children along with them. Deaths in the family had cost many children the opportunity to continue studies, while some others had altogether lost interest in learning. These children needed to be brought back to school, which is why Chief Minister M.K. Stalin himself launched the ambitious programme in October last year to hire local volunteers who can help guide the children back to classes in six months.

The scheme has been introduced on a pilot basis in 12 districts. Local committees comprising school teachers, panchayat heads and parents select volunteers—people who have studied at least till Class 12—to teach students up to Class 5. Graduates are selected to train children from Classes 6 to 8. The government says at least 1.5 lakh children have been brought back to studies so far.

“Having spent 19 long months away from school, children now struggle to sit attentively in class for even an hour,” says K. Elam Bhagavath, IAS, who is monitoring the progress of Illam Thedi Kalvi. “Under the scheme, volunteers will take classes at a common place after school hours. It is to go on for six months. The government has allotted Rs200 crore for the scheme. The main objective is to bring every single child back to school.”

There were only a dozen children in the Kundrathur centre when classes began. The teachers and volunteers had to go from door to door requesting parents to send their children. “Though there wasn't a good response at the beginning, the classroom is overflowing now,”says K. Diyanath Unnissa, headmistress at the Kundrathur Panchayat Union Middle School. “We spread the word innovatively with the help of folk artists and volunteers. It helped us bring the children here to get accustomed to going back to school.”

The government has set up around 65,000 such centres across the state. “Many children have forgotten to read and write,” says Bhagavath. “For those children, activity-based learning induces the interest in coming back to school.”