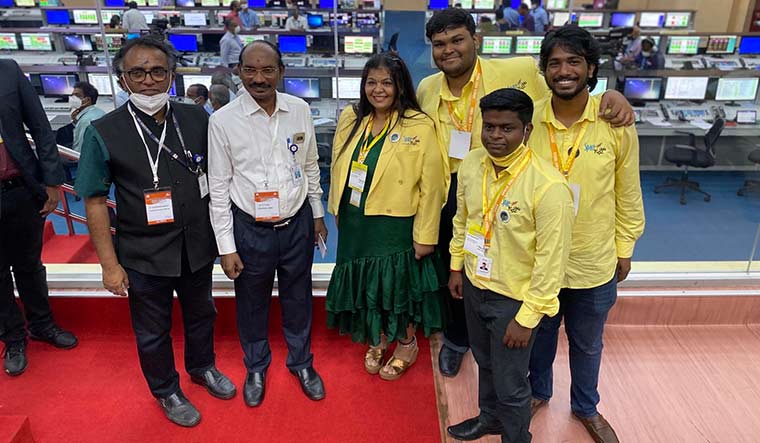 On February 28, the Indian Space Research Organisation’s polar satellite launch vehicle PSLV-C51 lifted off from the Sriharikota spaceport carrying 19 satellites, including a 3U CubeSat (a nanosatellite) that weighs just 1.9kg. Named after Satish Dhawan, one of the pioneers of the Indian space programme, this nanosatellite carried a digital version of Bhagvad Gita, a photograph of Prime Minister Narendra Modi and names of 25,000 space enthusiasts. 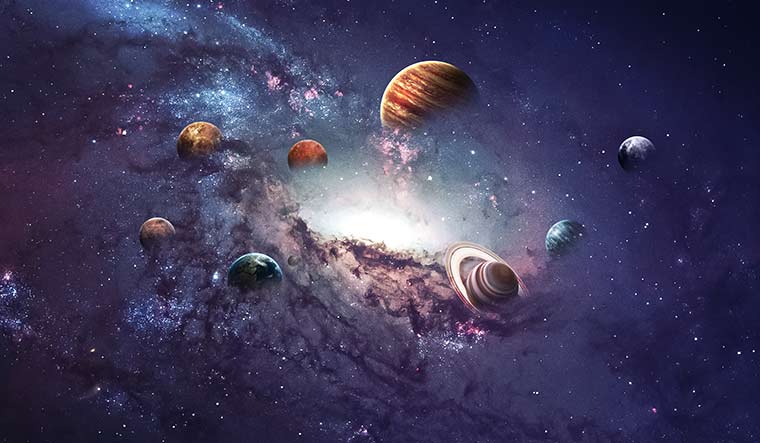 Developed by a Chennai-based private space company, Space Kidz India (SKI), this satellite is currently in earth’s lower orbit, orbiting its home planet 16 times a day. The ‘all-under-one-roof’ concept of ISRO helped SKI speed up the testing process of its satellite. Also, if not for ISRO’s facilities, the testing and launch of the satellite would have cost the company a huge sum of money. 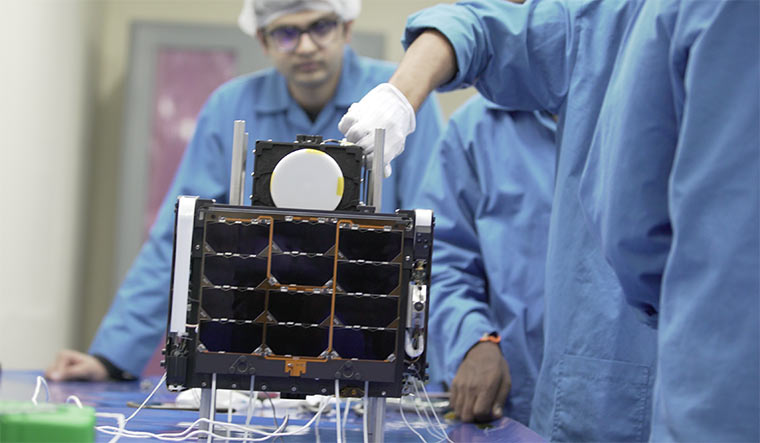 It was in May 2020 that the Union government had announced its new space legislation. Accordingly, the government opened up ISRO’s facilities for private companies. Also, an independent nodal agency named Indian National Space Promotion and Authorisation Centre (IN-SPACe) was created to act as a regulator and enabler for all space activities in India. Post that ISRO is welcoming private companies with open arms, sharing its facilities and technical mentorship. “Space is not only an elite industry but also one of the most expensive industries,” says Srimathy Kesan, founder and chief executive officer, SKI. “Opening up of the facilities [by ISRO] has truly come as a boon for organisations like ours.” According to the founders of Bengaluru-based space startup Pixxel, the establishment of IN-SPACe made communication and collaboration between the private space ecosystem and multiple sectors within the government more streamlined and efficient. 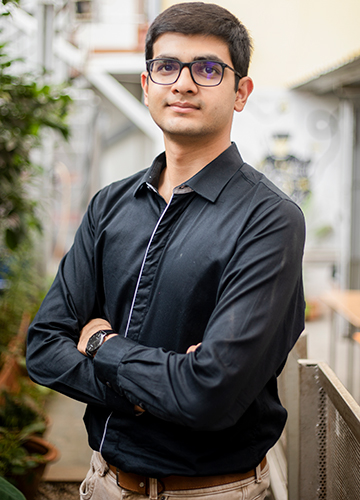 Pixxel’s first satellite, Anand, was also scheduled to be launched on ISRO’s February 28 mission. But five days before the launch the company had to pull out, owing to certain glitches found during the final stages of testing. Pixxel’s initial plan was to launch Anand on a Russian Soyuz rocket. But in December 2020, the company entered into a deal with ISRO for the launch. Awais Ahmed, co-founder and CEO of Pixxel, says ISRO responded to their request with great enthusiasm. “They provided expertise and resources, and offered us their facilities to test our satellite,” he adds. “The framework and approach that is already in place in these facilities will help budding space organisations, as they will take less time to build and scale basic structures.”

Ever since ISRO opened their gates for private players, many firms have come forward to use its facilities. The organisation has also invited private players to develop research and development solutions for food, medicine, space suits for astronauts, and anti-radiation and thermal protection technologies for spacecraft, for its human spaceflight programme, Gaganyaan.

Kesan says that, in 2015, when her company entered the space arena, things were different. There were only a handful of private space players in the country back then. “This was primarily because private players had zero opportunities—everything was dominated by ISRO and the government,” she says. But in the last six years, things changed for the better for the startups. 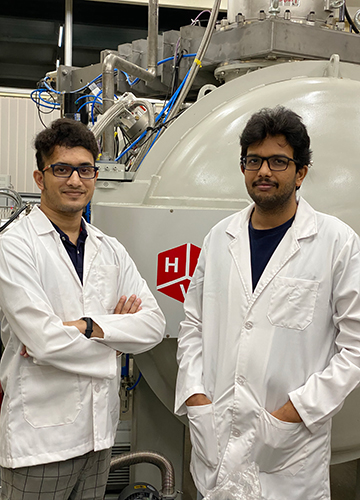 Bellatrix Aerospace, founded in 2015 by two young entrepreneurs—Rohan M. Ganapathy and Yashas Karanam—was the first Indian startup to win a developmental order from ISRO towards satellite propulsion technology. Since 2016, the startup has been working closely with the country’s premier space agency. In May this year, the company successfully tested India’s first privately developed hall-effect thruster—an electric propulsion engine used in micro-satellites. “The [2016] contract made us learn a lot of things, especially on testing and setting the quality standards,” says Karanam.

Hyderabad based Skyroot Aerospace, a startup focusing on building a series of satellite launch vehicles—Vikram series—is another startup utilising ISRO’s facilities. “It is helping us focus on the core product rather than building on the infrastructure,” says Pawan Kumar Chandana, co-founder and CEO, Skyroot Aerospace.

In January, ISRO made its first-ever announcement of opportunity (AO) for developing theme-based merchandise. This prompted Bengaluru-based firm Rocketeers to start discussions with the government agency. The company is looking at education and outreach programmes where they can help support and expand operations for ISRO. “The AO will allow the private sector to create products for consumption by the general public and improve awareness and outreach for ISRO,” says Divyanshu Poddar, co-founder of Rocketeers. “We hope to utilise ISRO facilities to launch and fly amateur rockets safely. This had not been possible earlier. This will also help us to set up the first-of-its-kind amateur rocket flying zone in the country.” 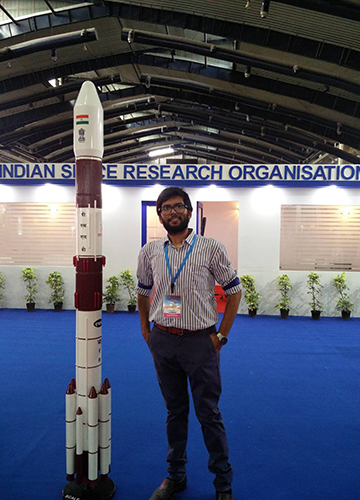 However, entrepreneurs believe that the opening up of government-run space infrastructure alone will not boost the private companies. A lot of work needs to come in from the industry side, especially on creating products that are disruptive both in terms of cost and innovation, they say.

Karanam observes that even now the Indian companies have to import numerous components and subsystems of satellites and rockets. “Growing local capabilities across the entire supply chain is important,” he says. “We also need to ensure that there is enough capital available locally in India as companies scale up.”

The industry experts point out that despite the changed atmosphere, it is still a very long way forward for Indian private space players. “The percentage of business and revenue generated by private space players in India, compared to the west, is low,” says Kesan. Srinath Ravichandran, co-founder and CEO of Chennai-based space startup AgniKul Cosmos, says that the revenue of private space players in India has not been as high as international players primarily because the Indian companies are focusing on capital-efficient value addition. “I believe in looking at how much was achieved with a smaller amount of money spent from the whole ecosystem, rather than looking at individual company revenues,” he says.

The industry experts also point out that in countries like the US, China and Russia, there is more governmental support for private firms. “These countries undertake numerous launches,” says Kesan. “This helps their private space players to flourish. The government should give more budget and help private players launch their spacecraft. At the same time, ISRO should not only open doors to their facilities but also support the buying of components and systems from the private players.” 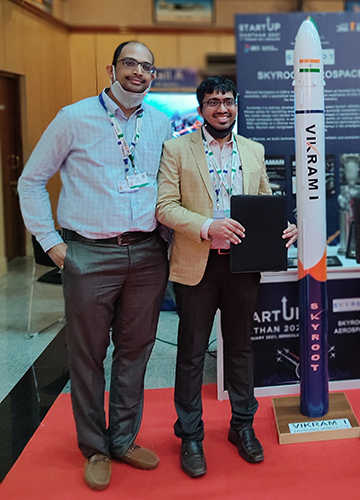 The space entrepreneurs say frequent launches from ISRO will help them to work on developing innovative solutions. SKI, for instance, had successfully demonstrated the LoRa technology—that enables long-range data transmissions with low power consumption—in its nanosatellite, Satish Dhawan SAT. Now they want to try the same technology in geostationary satellites (GSATs). “We are aware that GSATs are not launched very frequently by ISRO,” says Kesan. “Yet we are planning to send them a proposal and wait for an opportunity.” If it succeeds, SKI could become one of the first Indian space companies to provide internet-of-things (IoT) communications to India using space-based IoT gateways.

Collaboration among private players in the space-tech ecosystem is a ubiquitous phenomenon. Though a little late, the Indian space segment is also witnessing this phenomenon now. Technology and research-based partnerships enable the free movement of ideas and know-how, which makes it easier for companies to develop high-quality products and services. For instance, Bellatrix Aerospace signed a memorandum of understanding with Skyroot in February to use the orbital transfer vehicle (OTV) being developed by the latter in the upper stage of its Vikram series launch vehicles. An OTV can perform various in-orbit operations that would allow a launch vehicle to deliver satellites to more orbits than what was conventionally possible. The companies plan to have the first mission of a Vikram launcher with an OTV by 2023. 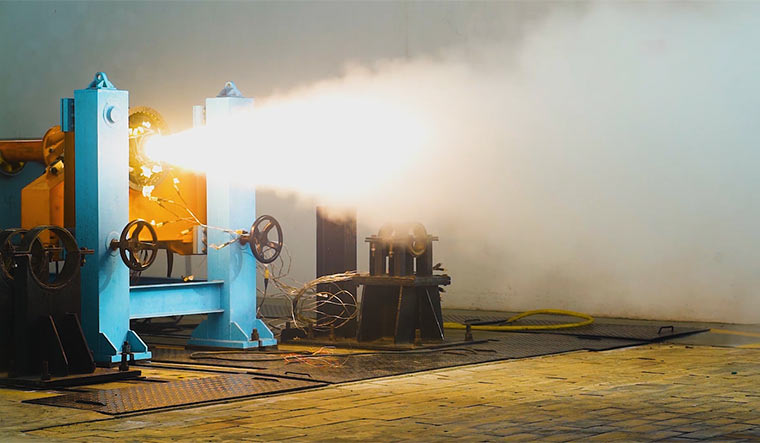 Seeing the increased enthusiasm in the segment, global investors have started funding space startups in India. AgniKul Cosmos, the world’s first company to successfully test a fully 3D-printed rocket engine, raised $11 million in series A funding in May. Similarly, Skyroot Aerospace also raised $11 million in its series A round. These two startups received the largest funding ever since ISRO opened its doors for private players.