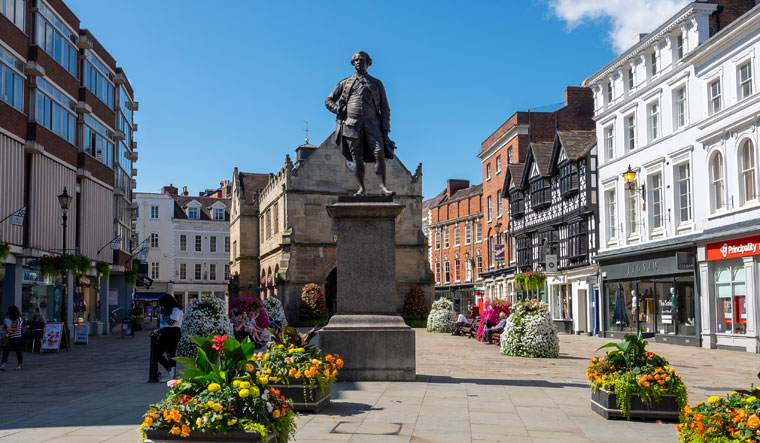 Figure out: Clive’s statue at the Shrewsbury town square | Shutterstock

The battle to remove Robert Clive’s statue goes beyond London. Clive stands tall in the middle of Shrewsbury town square, a much-photographed landmark in Shropshire county. In the wake of the Black Lives Matter movement, Clive’s imperial past has caught up with him. Local resident David Parton started a petition for the statue to be removed; more than 13,000 people signed it. Parton’s argument: “Clive is not a hero. He is a murderer.” A counter petition to keep the statue also exists, with more than 8,000 signatures. Their logic: Clive contributed to Shropshire and needed to stay.

The controversy has generated a heated debate, tearing the small town apart. “When the (slave trader) Edward Colston statue was torn down, I thought this was the moment we needed to have a debate about Clive in my hometown,” Parton says. “No one has talked about his historical legacy, no one has questioned his imperial past. This is the moment, we need to address his numerous crimes.” But there are those who are equally convinced that Clive needs to stay. The need to remove him is a demand made by foreigners, they say.

The Shrewsbury example offers—as a microcosm—the kind of resistance that exists to add a progressive caveat to a past that was not always glorious. In London, Clive may be a name that has been forgotten, even though he stands in front of the Foreign Office. But in Shropshire, he is the boy who came back as a successful man and represented the county.

His school desk inscribed with an R, from the Old Grammar School, is on display at the Market Drayton museum. The house he built for his parents at nearby Stych is listed as a Grade II building and has been divided into flats for sale.

“We are having a purge on anything regarded as not quite praiseworthy. So that includes almost all of our history,” writes Ian Picton-Robinson, manager, Market Drayton Museum, in an email. “Curiously, I think India was not a slave situation. Though Britain unquestionably dominated, with force and total misunderstanding, were there not some benefits? Many governors and viceroys wanted to improve things, but were frustrated by the sheer complexity of India and its traditions, and by the government in London understanding even less.”

The statue is not the only memory of Clive in the town. There are three streets named after him—Clive Road, Clive Way and Clive Green—according to local history sources. Clive was elected MP from Shrewsbury in 1761, a seat he held until his death. In 1762, he was elected mayor of the town.

He died in 1774. It is believed that he killed himself amid accusations of greed and was buried in an unmarked grave at St Margaret’s Church in Moreton Say, Shropshire. He was hailed as a hero only in 1860, following which the bronze statue was raised in Shrewsbury town square. “If seen as just Clive, then well worth being there,” says Picton-Robinson. “If seen as a symbol of the East India Company, then perhaps it should be moved to somewhere less prominent, surrounded by relevant history.” According to local history sources, it was the stain of taking his own life that prevented the town from honouring him earlier.

In July, the Shropshire council voted to retain the statue 28 to 17 votes. The council is debating on adding a plaque to put in context Clive’s past. But Parton says, “Clive’s statue represents bringing up painful imperial memories every single time we walk past it. We shouldn’t have to be living in the past.”