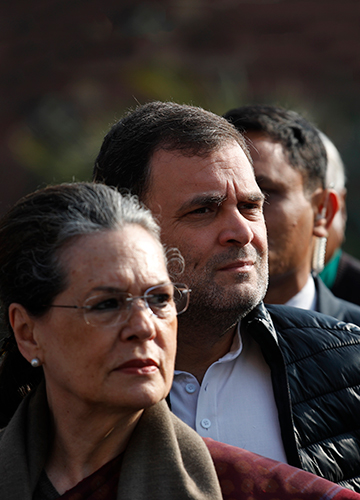 THE DEPARTURE OF Jyotiraditya Scindia has led many to predict a slow unravelling of the Congress party and created much unwarranted speculation about others who might be tempted to follow. There is a lot of loose talk about his exit being symptomatic of a larger leadership crisis in the party. I beg to differ.

First of all, calling it a ‘crisis’ suggests that we simply do not have any solutions to the current leadership vacuum that we are facing following the resignation of Rahul Gandhi—and that is not the case. For one, the Congress Working Committee made the right move by appointing the redoubtable Mrs Sonia Gandhi as interim president to direct the efforts of the party for a temporary period of time. For another, we do have strong leaders, both in New Delhi and in the states, who continue to offer leadership and have credibly led the party in the past. But the delay in appointing a full-time president should be a concern for the party since the absence of such a leader is hampering our credibility, our collective capacity and our ability to effectively convince the voting public to support us.

Second, Scindia’s departure has much to do with reasons that are personal to himself and do not extend to others. Yes, his own followers, mainly in one region of Madhya Pradesh, have exited with him. But that will be the extent of it. His willingness to consort with the BJP, a party he has rightly, and eloquently, excoriated in various speeches and statements in the recent past, suggests a hollowness of convictions and principles that few others would be willing to emulate. Indian politics has long been regarded with cynicism by those who take ideas and values seriously. His example is grist for their mill, but it does not mean everyone else is like him.

True, the recent results from the Delhi state elections, where the Congress again drew a blank, testify to a failure to inspire. After being placed fourth in Maharashtra, being accused of not trying hard enough in Haryana, and losing Karnataka so soon after forming a government there, Delhi and now Madhya Pradesh constitute the most immediate cases for the Congress to urgently address key concerns that are hampering our effectiveness as a pan-national political alternative to the BJP.

Even more troubling is that these results are feeding into the growing public perception, fuelled by a dismissive media, that the Congress is adrift and rudderless, incapable of taking up the challenge of a credible national opposition. That is precisely what we need to urgently address by expediting the process of finding a full-term president, through a participatory and democratic process that will offer the winning candidate a legitimate mandate and the credibility that will be indispensable in ushering in much needed organisational and structural changes to the party.

This perception is increasingly fuelling a shift in the mindset of the voters, compelling them to look at other political alternatives. If we allow such a view of the Congress party to persist, it will lead to a steady erosion of even our traditional vote bank and their gravitation towards our political competitors. To arrest this, we need to embark on a collective process to find an individual with the necessary capacity and capability to lead the party.

Once we do elect a new president, I believe that we need to pay attention to the following. We must decide what we stand for and communicate it effectively and repeatedly. We must articulate a vision for the future that embraces the aspirations of India’s majority: the young. We need to devote most of the party’s attention to the grassroots. We have to return to the ethos of politics as social work for those who cannot help themselves. And strategically, we must explore pragmatic coalitions with regional parties so as not to let the government take advantage of the division of anti-government votes. If we do all of this, we will prevail over the BJP in 2024.

I do think that Rahul Gandhi’s reluctance to resume this mantle must be respected. He has still got a lot to contribute to the party and has the capacity and vision to rally the party together. Which is why even when he offered his resignation, I personally tried to talk him out of it, hoping he would stay on and lead the process of revival. If he does agree to reinstatement, then the sooner he does so the better, and the party will welcome it. If not, we need to move forward as the nation expects.

The process to find a new leadership is not about any one individual. As I have publicly stated, the repeated question of “Gandhi or non-Gandhi” is missing the wood for the trees. The larger concern and the need of the hour is to find a new leadership, including a rejuvenated Congress Working Committee. I am confident that if we do so through a participatory, transparent and democratic electoral process internally, the workers will throw their might and energy behind whoever emerges as the winning candidate.

India needs an effective opposition, and no one doubts that the Congress—with its history, its nationwide footprint, its deep bench strength of experienced and capable leaders, its pragmatic policies honed by years of successful implementation, and its compassionate commitment to inclusive politics—represents the best vehicle for a strong pan-Indian opposition. We in the Congress owe it to the nation to get our act together. The challenge we must meet is nothing less than that of saving India. We are equal to the challenge. We just need to prove it.

Tharoor is a member of Parliament.