The defence deals that India and the US could soon sign 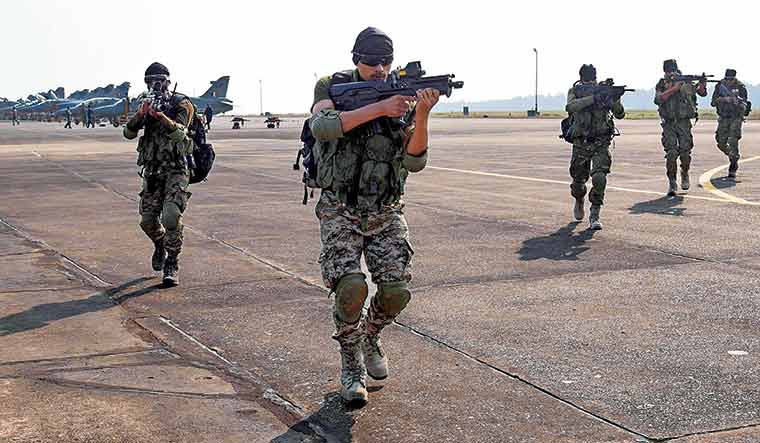 Joint effort: Indian Air Force Garud commandos perform a drill as part of joint exercises between the Indian and US air forces at the Kalaikunda Air Force Station in West Bengal | AFP

Donald Trump might find it difficult to sell American milk to India, what with the pushback from the Indian dairy industry, but arms are a whole other story. According to the Stockholm International Peace Research Institute, India’s defence purchases from the US jumped a whopping 569 per cent between 2013 and 2018. In the same period, defence imports from longtime ally Russia came down from 76 per cent to 58 per cent. Currently, US arms sales to India stand at around $18 billion, and could reach $25 billion after deals in the pipeline are cleared.

“Defence is now driving the relationship and, as the two countries come closer on the idea of the Indo-Pacific, this aspect will only get stronger,” Harsh V. Pant, a professor at King’s College, London, and head of the strategic studies programme at the Observer Research Foundation, told The WEEK. “This visit will see a few major deals being signed and future possibilities explored.”

The sale of 24 MH-60 Romeo Seahawk helicopters for $2.6 billion seems to be the most immediate deal; both parties have finished the groundwork. The helicopters, built by Lockheed Martin’s Sikorsky Aircraft, will be procured under the ‘government-to-government’ route. The MH-60 is the US navy’s primary anti-submarine and anti-surface warfare helicopter and is capable of search and rescue, and supply missions. The Cabinet Committee on Security gave the nod to the MH-60 helicopters on February 19, and it might find mention in the Narendra Modi-Trump joint statement.

Then comes the deal to procure six more Apache attack helicopters, worth around $1 billion, for the Army. Called ‘flying tanks’, the helicopters are capable of detecting and engaging 256 moving targets.

On February 11, the US approved the sale of an Integrated Air Defence Weapon System for $1.9 billion to India. Popularly known as National Advanced Surface-to-Air Missile System-II (NASAMS-II), it can shoot down multiple aerial threats in a 9/11 type of attack. But defence sources claim that the deal will take some time to fructify as Delhi has already signed the deal for an S-400 air defence system with Russia.

At the time of the deal with Russia, the US had threatened India with sanctions. But India managed the pressure well, said observers, and moved ahead with the S-400 deal with limited repercussions, so far.

“US policy toward Russia remains muddled and there are no clear indications as to whether it will sanction India in even perfunctory ways for its purchase of the S-400 system,” Joshua T. White, former White House official and currently associate professor at The Johns Hopkins University School of Advanced International Studies in Washington, told THE WEEK.

The other deals include the move to acquire 30 armed Sea Guardian (Predator-B) drones for more than $2.5 billion for the three services. It that happens, India would be first country outside the NATO alliance to get such a weapon from Washington.

The Pentagon has also agreed to sell two missile defence systems to Air India One for an estimated $190 million, a move that will enhance the security of planes flying the prime minister and the president.

There is also the Indian Navy’s plan to acquire 10 more Boeing Poseidon-8I long-range maritime aircraft. The deal, worth over $3 billion, will be finalised under the foreign military sales programme.

The Indian Navy needs 57 multi-role combat fighter jets, and Boeing’s F/A18 jet is seen as a strong contender for this role. Lockheed Martin has also offered to make its F-21 jets exclusive to the Indian Air Force. The F-21 is in the race to get the IAF’s tender for 114 medium multi-role jets. “These [deals] have been in the pipeline for a long time and are not unexpected [during Trump’s visit],” said White.

Apart from focussing on defence deals, Donald Trump will also have Afghanistan on his mind, in particular the fallout from the withdrawal of US forces from the trouble-torn nation.

For India, though, failure to intervene will also have costs—key among them, the risk that southern Afghanistan could become a safe haven for jihadists, and an obvious possibility of them joining hands with Pakistan-based terror outfits.

Analysts believe that there is no pressure from President Trump for India to send troops to Afghanistan as the US 'Strategy in Afghanistan and South Asia', announced in August 2017, clearly states that “We want India to help us more with Afghanistan specially in area of economic assistance.”

“I doubt that President Trump will bring any assurances to Prime Minister Modi regarding Afghanistan. The US-Taliban deal that has been provisionally announced is merely the first phase in what will, at best, prove to be a long process of negotiation between the Taliban and various Afghan elites. India has its own equities but rather little leverage over the peace process itself," Joshua T. White explained.

Harsh V. Pant believes that Afghanistan will be a challenge in the short-to-medium term as the US wants to get out and have a deal with the Taliban before the presidential elections. India is much more pessimistic about the Taliban and its future intentions. "Trump's visit will allow India to tell its side of the story directly to Trump," Pant added.

Military observers believe that India doesn’t have the logistical and technological means to support a counter-insurgency mission in a third country like Afghanistan.

"In terms of military deployments whatever troops we send have to organise themselves to operate from secure bases, which consume a lot of manpower and resources and then we have to have adequate combat power available to be able to conduct operations to achieve desired aim. For this purpose, a brigade group or a division, to my mind, is really not a viable strength. And if you need larger formations, operational logistics would be a huge challenge and these challenges cannot be wished away," explains retired Lt. Gen Anil Ahuja.

Ahuja is a former deputy chief of integrated defence staff (policy planning and force development) and presently associated with a Delhi-based strategic think tank, Delhi Policy Group. Ahuja also emphasised the Indian Army is yet to forget its losses in its intervention in Sri Lanka.