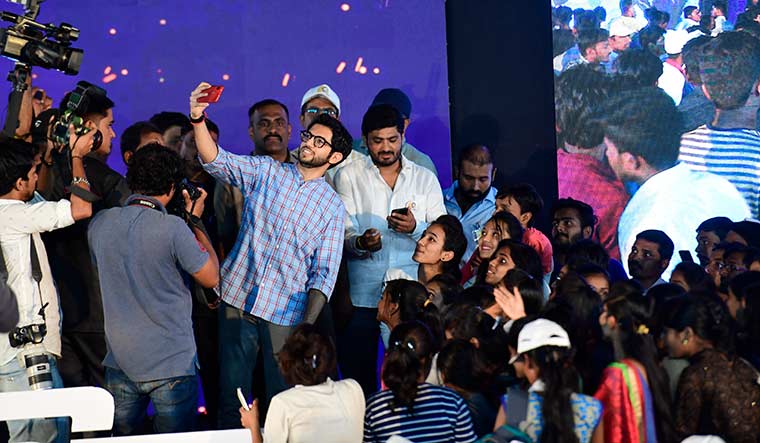 Eyes on the prize: Aditya Thackeray takes a selfie at a rally in Nashik | Amey Mansabdar

It is 10am on a pleasant Sunday at Guhagar, a small town in Maharashtra’s Ratnagiri district. More than 500 people sit on red, plastic chairs in an open-air auditorium, waiting to welcome Aditya Thackeray. Saffron flags and posters showing the 29-year-old president of the Shiv Sena’s youth wing line the pathway from the road to the auditorium. Outside the gate, a band of drummers try out their beats even as loudspeakers blare the Sena’s theme music.

Women have turned out in droves, dressed in their finery. Men sport bandanas and scarves to show their allegiance to the Sena. Apart from legislators, councillors, grampramukhs and party workers, there are farmers, students and villagers who have come from far to see Sena founder Bal Thackeray’s grandson up close.

Two hours later, Aditya finally arrives. As he steps off an air-conditioned bus, his lean frame is lost in a swell of supporters in white kurta-pyjamas.

The Guhagar event flags off the second day in the fourth leg of Aditya’s Jan Ashirwad Yatra, which he describes as a thanksgiving journey to meet those who voted the Shiv Sena to power, both in the state and at the Centre. The first three phases of the yatra covered northern Maharashtra, Vidarbha and Marathwada. This phase will cover five districts in the Konkan division in four days.

“Jai Maharashtra!” cries Aditya as he takes the podium. The crowd falls silent. “I am here to seek your blessings, not your votes. I am here for pyaar, not politics,” he says. There is thunderous applause.

Aditya has been carefully cultivating his image of being a thoughtful leader who cares about people’s issues. Recently, he fiercely opposed the cutting down of more than 2,000 trees in a leafy suburb of Mumbai for the metro rail project. The protest won so much support that the Sena apparently wants to field him from the Worli assembly seat.

“Raise your hands and look at each other,” Aditya tells the crowd. “This is the kind of strength we need. I am here to salute each Shiv Sainik. Will you bless me or not? All you youngsters, will you be with me or not?”

The crowd roars its approval.

“We have always supported the Sena and will continue to do so,” says Taniya Salvi, grampramukh of Narad Kherki village in Chiplun district. “But, at the same time, our people are fed up of travelling to Mumbai and Pune for work. We want industries here, and roads that are smooth and safe. Today, roads are so bad that patients die trying to cover the distance from the village to the hospital.”

Aditya’s speeches are short. He spends around 10 minutes at each venue, before he is back in the bus waving and smiling. His entourage has around 30 people—secretaries, social media managers and party workers—apart from photographers and journalists. As the yatra goes on, the original convoy of ten vehicles, mostly cars, grows to 30.

Once the bus climbs the Konkan ghats and is out of the public eye, Aditya becomes his usual self. He jokes, laughs, sings and chats with the others, including journalists, as if it were one big party in the bus. Now and then, he leans against the window to greet supporters on the road.

When do you plan to get married, asks a journalist. Aditya gives a Shivaji-like reply: “First, I will protect my fort. Only then will I think about marriage.”

Durga Bhosle, Yuva Sena secretary and member of his social media team, tells me how “cool” it is to work with him. “Every night, after the yatra, we all come together to take stock of the day,” says Durga. “He wants to know if we are well-fed and rested, and knows us all by our first name.”

The bus reaches Khed, the constituency of Shiv Sena leader and Environment Minister Ramdas Kadam. His son, Yogesh Kadam, is Aditya’s host at the venue—a mini stadium that can accommodate more than 3,000 people. “Aala re, aala re; Shiv Sene cha waagh aala re,” shout supporters. He has come; the Sena’s tiger has come!

It rains, but nobody looks for cover. Chairs become umbrellas as they listen to “Adityasaheb”. “We connect with him,” says Sai Raviraj Chikle, a pharmacist who is in her twenties. “We want someone from our age group to come to power. Also, the Sena has done a lot for us.”

There are also those who root for the Kadams than the Sena. “Yogesh has helped us a lot,” says Shabnam Kulkarni of Dapoli village. “If I vote, it would be for him, not for the party. It is he who helps us, not the big Sena people like Aditya and his father.”

At 4pm, Aditya and his entourage have lunch at Shiv Sena MLA Ravindra Waikar’s bungalow at Khed. He and his close aides are given personal attention, while more than 200 others are served biryani and chicken masala. “Overall, we are very positive of the response we have got,” Aditya tells me. “With so many blessings in my kitty, can the Sena ever lose hope?”