Lok Sabha polls: It's a suave Naveen Patnaik versus an aggressive BJP in Odisha

Will Naveen Patnaik be able to stop BJP juggernaut from rolling into Odisha? 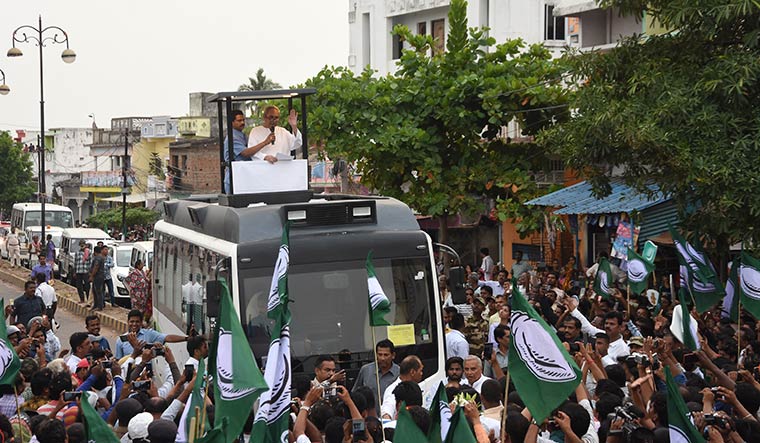 The aspiring kingmaker: Patnaik at a roadshow in Berhampur district | Dhruba Mishra

“Are you happy?” Naveen Patnaik asked the galleries at the opening of the World Cup Hockey last November in Bhubaneswar, where he showcased Odisha to the world. And then, without any touch of drama and without waiting for the audience to reply, he added blandly, “I am very happy.”

The Odisha chief minister lacks drama in his person. He cannot make a good speech; or, for that matter, he cannot even speak his people’s language. All his speeches—official and political—are prepared by his aides in Roman script for him to read. He recites them in a laboured manner, often mispronouncing the words, giving much mirth to listeners. As at the hockey event, he does not even listen to the people.

For close to 20 years, Patnaik has been leading Odisha without speaking rightly or listening properly. It would look as if he has been taking Odisha’s wishes for granted. He seems to think—and he has proven it—that communication is not necessarily through spoken language. “He has an army of people who inform him on the issues faced by the people,” said an aide. “The trick has been to address the issues before they become problems. Issues become problems only when they are visible and are talked about. He has managed to keep them out of sight, and thus prevent them from distressing the people.”

There are other ironies, too. The state is home to some of India’s poorest, but there are few beggars on the streets of Bhubaneswar, Cuttack or Puri. The literacy rate is low, but many young Odias have done well in all-India competitive exams. The state ranks low on sanitation indices, but towns look clean with well-swept pavements and unclogged drains. There are no garbage heaps and encroachments. Streets are navigable, with no traffic holdups, and the air in Bhubaneswar and Cuttack smells fresher than it does in Bengaluru or Kolkata.

The state figures low on most development indices, but there is hardly any social strife. With minorities making up less than 3 per cent of the population, communal violence had been unheard of—till the infamous Graham Staines and Swami Lakshmanananda murders, which remain as aberrations. Though tribals (23 per cent) and dalits constitute 40 per cent of the population, caste has hardly ever been a factor in elections.

Pollution watchdogs may disagree, but rivers and ponds look clean in Cuttack and other towns. The huts of the poor in the countryside are plastered with red mud or cow dung, and village markets look tidy. Simply put, town streets do not stink and villages look idyllic, though not prosperous.

Odisha was India’s first province carved out on the basis of language—back in 1936—but there is hardly any trace of linguistic parochialism in Odia society or polity. Even the chief minister’s rivals have rarely attacked him for his ignorance of the language. “But the BJP is beginning to do that,” said a Patnaik aide, referring to BJP president Amit Shah’s exhortation at several election meetings to elect an “Odia-speaking chief minister, instead of an English-speaking one”. 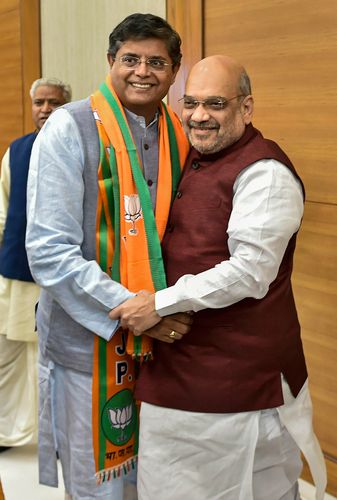 Critics may say appearances are deceptive, and that Patnaik’s trick has been to brush the garbage of problems under the carpet. But the trick has worked for 19 years, thanks in part to a well-oiled administration and to the decimation of the ranks of critics over the years.

Despite corruption charges against bureaucrats and his party colleagues in the mining and chit fund scams, Patnaik has personally remained clean. He has projected a clean image of the government by getting rid of anyone against whom a corruption charge has been made, and by frequent shuffling of his aides. In a bid to ward off anti-incumbency, he has denied tickets to 16 of his sitting MPs, and nearly 40 per cent of his MLAs. New faces, including a clutch of retired civil servants, have been fielded instead.

Patnaik, 72, is facing perhaps his toughest fight yet. He is seeking a fifth term as chief minister, and wants to emerge as a kingmaker in a hung Lok Sabha. His detractors say the loner who loves a few pegs of Famous Grouse in the evenings is sick; that his hands shake.

“I know who is spreading these rumours,” Patnaik told a journalist, hinting at the name of Baijayant Panda, a chum with whom he used to have Scotch sessions. Panda is contesting on a BJP ticket from the prestigious Kendrapara seat, once won by Patnaik’s father, Biju. Patnaik’s party, Biju Janata Dal, has sent out a video of Patnaik’s morning workout to show that he is fighting fit.

All the same, the Narendra Modi-led BJP, which had just one seat from Odisha in the last Lok Sabha, has launched a new Kalinga war, with Union Minister Dharmendra Pradhan as its general. Amit Shah has been a frequent visitor to the state, having addressed two rallies in four days before the first round of polling on April 11.

BJP leaders admit that the party realised the importance of Odisha after its recent defeat in the assembly elections in Madhya Pradesh, Chhattisgarh and Rajasthan. Suddenly, every seat began to count, as the party realised that it ran the risk of finishing below halfway mark in the Lok Sabha. It began to look more seriously at states that are traditionally non-BJP, such as West Bengal and Odisha. The BJP’s goal is to do a Tripura in Odisha.

It has since launched an imperial campaign, under Pradhan, against Patnaik’s covetable Kalinga. “We have given 19 years to Naveen babu, but he has failed to develop even his own constituency of Hinjili,” said Pradhan at a meeting in Hinjili. “People from the constituency are leaving the state, particularly for Surat in Gujarat, to eke out a living.”

The most encouraging factor for the BJP, which has just 10 members in the 147-seat assembly, is its improved performance in the recent local body polls. Having realised that its ultra-nationalist and majoritarian cards have little value in a state that has no history of Hindu-Muslim friction, the BJP is seeking votes by fielding Patnaik’s detractors against Biju Janata Dal. 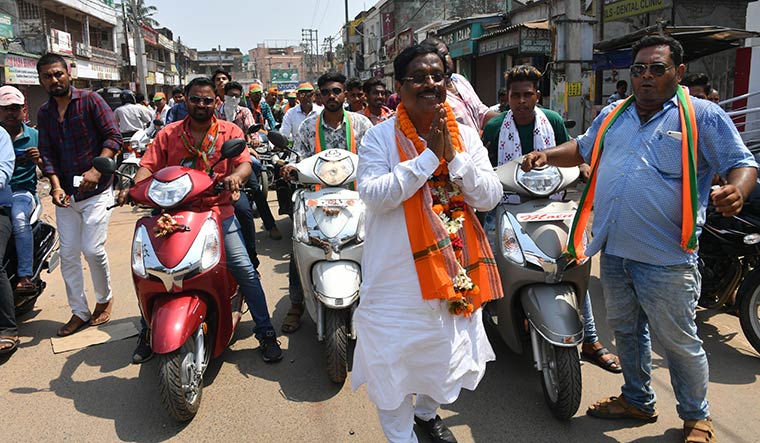 The BJP’s prize catches have been Baijayant Panda (Kendrapara), Balabhadra Majhi (Nabarangpur), tribal heavyweight Jayaram Pangi (Koraput) and former minister Samir Dey (Cuttack assembly seat). A host of others, such as Kandhamal MP Pratyusha Rajeshwari Singh and MLAs K. Narayan Rao and Damodar Rout, have joined the party, and many of them are likely to get BJP tickets.

Patnaik’s detractors so dominate the BJP’s roster that Bhartruhari Mahtab, five-time MP and the BJD’s Cuttack candidate, quipped, “We have a joke here that the BJP is waiting at the front gate of Naveen Niwas, and offering tickets to anyone who is coming out without a BJD ticket.”

The BJP’s second plank is development. “After seeing Modi as prime minister for five years, the people want to have his vision translated into reality here,” said Sambit Patra, who is up against the BJD’s three-time MP Pinaki Misra in Puri. “The buzzword is parivartan (transformation) to double-engine growth.”

Added Samir Dey, the BJP’s Cuttack candidate who talked to THE WEEK riding pillion as he led a two-wheeler rally: “Double-engine growth is possible only if we have the same party’s government in Bhubaneswar and in Delhi.”

Realising that the BJP is a formidable war machine, Patnaik is focusing on getting the support of women, for whom the government has been running welfare and job-generating schemes for years. He has now offered interest-free loans of 05 lakh to every women’s self-help group, jobs worth Rs5,000 crore a year to Mission Shakti workers in the mid-day meal scheme, paddy procurement, supply of school uniforms, Rs25,000 gift to all poor brides, and so on.

Rice is sold to the poor at one rupee a kilo, and subsidised meals are offered to the hungry near railway and bus stations and hospitals (much like Tamil Nadu’s Amma canteens). Farmers are already benefiting from schemes such as KALIA (Krushak Assistance for Livelihood and Income Augmentation).

“There are already schemes for everyone, from the womb to the tomb—free health care for infants and mothers, free textbooks, school stationery and uniforms, free bicycles for high-schoolers and laptops for college students,” said Misra. “There is no family that would not have benefited one way or the other from the government’s schemes.”

The BJD calculates that this would assuage the public anger precipitated by the Ponzi schemes in which a host of party leaders were allegedly involved—the worst blemish on the image of the government.

The Congress, meanwhile, seems to have virtually withdrawn from the fight for Lok Sabha seats, and is focusing on the assembly polls. Congress president Rahul Gandhi’s earlier efforts to mobilise tribals against Patnaik’s mining and industry projects had come a cropper. The party had also been so riven by infighting that it has seen the arrival and departure of four state presidents in as many years.

Former MP Bibhu Prasad Tarai, who refused the Congress ticket for Tirtol assembly seat, joined the BJP and is contesting from Jagatsinghpur Lok Sabha constituency. On the eve of the first phase of the polls, state Mahila Congress chairperson Sumitra Jena quit alleging that the party leadership had rejected her recommendations regarding women candidates.

The signs of revival that the Congress had shown, especially after Rahul began targeting the BJP over issues like the Rafale deal, are no longer visible. As the elections drew near, a rethink seems to have happened. Though the party had announced earlier that several of its national leaders—including Rahul, Sonia Gandhi and Priyanka Gandhi Vadra—would campaign in Odisha, none has turned up so far. There has been only one visit by Rahul—that, too, before the campaign began gathering steam. One Rahul rally was cancelled on the pretext of bad weather.

In its effort to improve its position in the assembly, the Congress appears to have left the job of stopping the BJP to the BJD. “We will benefit, if we can consolidate a little more,” said Jagneswar Babu, state Congress vice president. “Even in the case of Ponzi scams, it is the BJP that is going to be mauled, as many of the tainted BJD leaders are now in the BJP.”

Congress leaders also privately admit that their political energy would be better spent if they help Patnaik prevent the BJP juggernaut from rolling into the land of Lord Jagannath. They have been careful not to attack Patnaik personally, even as they flay the BJP.

The softness hides a fond hope. Wouldn’t Patnaik, who wants to be a kingmaker, be more considerate to the Congress than the BJP in a hung Lok Sabha? No one in Odisha would hazard a guess. For Patnaik, despite his genteel image and suave manners, is at heart a Chanakya.