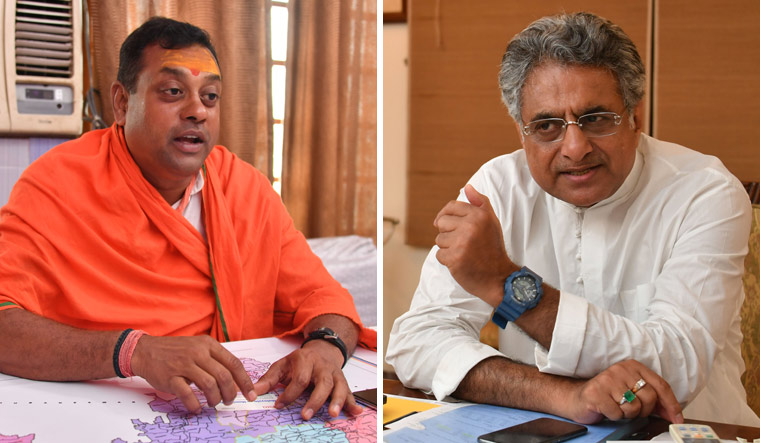 PURI, THE SEAT of Lord Jagannath, failed to make itself a prime ministerial seat. Narendra Modi had thought of contesting there, but gave up the idea later. Yet, Puri remains one of Odisha's prime seats.

The two principal candidates of Puri are studies in contrast. Fighting for a fourth term there is the BJD's soft-spoken Pinaki Misra, scion of one of India's most illustrious judicial families which has given two chief justices to India. He had won the seat in 1996, 2009 and 2014. Pitted against him is the BJP's most acerbic spokesman, Sambit Patra.

Misra is least perturbed by the bursts of the Patra pataka. Asked if he would have to change his campaign style, Misra smiled and said, “It is Patra who has changed. Listen to him in Puri; he is quite subdued here. He has realised that demagogy and violent language do not work here.”

All the same, Patra, born to an Odia family in Jharkhand, did kick up a controversy when he carried a statuette of Lord Jagannath on his campaign vehicle. Traditionalists decried it saying that the lord is taken out only during the annual chariot festival.

Interestingly, both candidates are not talking much about local issues. “That is because of two reasons,” said a Congress functionary who admits that the party is resigned to being a poor third in most of Odisha. “One, both candidates are big men in their parties. Secondly, there are not many politically-yielding local issues in Puri.” Satya Prakash Nayak, a former primetime news anchor, is the Congress candidate in the seat.

Patra is banking on the Modi wave. He got Amit Shah to launch a road show in Puri. He is seeking votes on the BJP's national issues such as national security. But, Misra dismisses those as conflict-kindling issues. “We Odisha people are not violent; there is perfect communal peace here,” he said.

Misra is relying on the goodwill that he and his party enjoy. “I have done quiet work here, and that is there for everyone to see,” he said. “But, apart from that, there is tremendous goodwill for our party, which has been launching several welfare schemes. There are eight to ten flagship programmes that have been implemented, such as free cycles and laptops for students, cheap canteens, and so on.”

Patra would not agree. “The state is rich in resources, but the people are poor,” he said. “We want to channelise the resources for the development of the state and the people. The buzzword here is parivartan.”

Patra says that Misra has not raised Puri's issues in Parliament. Misra shrugs it away saying Patra has no idea of what he has been doing in Parliament or in Puri.

Puri has now to decide how it wants to be heard in the Lok Sabha —quietly or loudly.