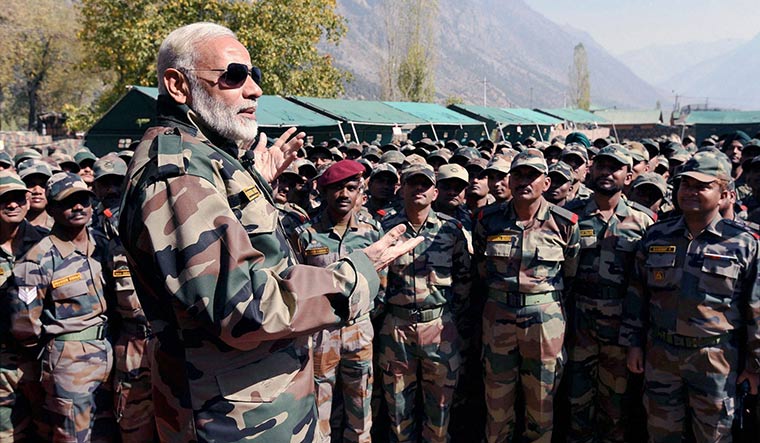 Raring to go: Prime Minister Narendra Modi celebrating Diwali with jawans of the Army and the BSF, in the Gurez Valley, near the Line of Control. Threats from across the border is a recurring theme of the BJP’s poll campaign | PTI

On February 26, the day India woke up to the news of Indian Air Force jets crossing the border with Pakistan to strike at terror camps in Balakot, BJP president Amit Shah was scheduled to visit a dalit majority village in Uttar Pradesh’s Ghazipur. As if on cue, the BJP had got the walls of the mud houses in the village painted with scenes from the Hindi film Uri, which was based on the 2016 surgical strikes by the Army. The villagers revelled in their short-lived fame and were genuinely happy about the newly-laid power lines which brought electricity to their homes.

At Ghazipur, Shah combined the two key themes for the BJP in this election season: national security and political engagement with beneficiaries of Prime Minister Narendra Modi’s pet schemes. And, the air strikes against Pakistan brought in a dose of ultranationalism. 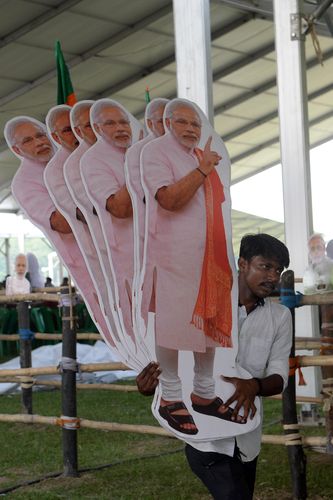 In modi, we trust: BJP workers preparing for Narendra Modi’s rally at the Brigade Parade Ground in Kolkata On April 3 | Salil Bera

Elections are won by those who control the narrative and present a theme that resonates with voters. In 2014, the BJP campaign centred around the promise of achhe din and of tackling corruption. There has been a shift this time, with an overdose of nationalism and security issues. Threats from across the border has become a recurring theme of the BJP campaign.

In the Uttar Pradesh assembly elections two years ago, the surgical strikes helped the BJP reap rich rewards. The party hopes that the Balakot strikes and the recent launch of the anti-satellite missile, A-SAT, will do the job this time. The BJP promptly took credit for both, saying it was possible only because of Modi’s strong leadership. The party has launched a presidential form of election campaign, presenting Modi as the strong and decisive leader who has made his mark on the world stage, and, has delivered domestically.

“From every seat, Narendra Modi is contesting. The country is going to vote to make Narendra Modi prime minister. Even Amit Shah is not contesting,” said Shah in his interview with THE WEEK. Multiple surveys have shown that Modi’s popularity remains high, but many BJP MPs are in trouble because of issues such as agrarian distress, dalit consolidation and strong opposition alliances. To counter this, the BJP is choosing candidates based on caste calculations, luring key leaders from the opposition, highlighting the government’s achievements and topping it all with the Modi blitzkrieg. In Uttar Pradesh, where the BJP is facing a stiff challenge from the alliance of the Bahujan Samaj Party, the Samajwadi Party and the Rashtriya Lok Dal, it has replaced most of its dalit MPs with fresh faces, in an apparent attempt to address dalit consolidation against the party. Similarly, around 50 sitting MPs have been denied tickets in states like Maharashtra and Gujarat. The party has picked MLAs and even turncoats from other parties to replace them.

The highlight of the BJP campaign will be rallies attended by Modi and Shah. By the end of the campaign, Modi would have addressed 110 rallies and Shah 135. Areas where both have not visited recently are being prioritised as venues. Each rally will cater to two or three Lok Sabha seats.

Modi’s first rally was on March 28 in Meerut, which came a day after he announced the successful launch of India’s anti-satellite missile. “This chowkidar has shown courage by conducting strikes in land, air and space,” said Modi. Western Uttar Pradesh is a test case for the BJP, where it had performed well in the past, benefiting from religious polarisation and a divided opposition. This time, the SP-BSP-RLD alliance poses a major challenge. The BJP is waiting to see how the first two phases of polling go, so that Modi can shape his campaign and messaging accordingly.

In his campaign speeches, Modi has consistently attacked opposition leaders including Congress president Rahul Gandhi. He hopes to overcome anti-incumbency by accusing the opposition of being soft on national security and on Pakistan. On April 2, while addressing a rally in Jamui, Bihar, Modi called opposition leaders “spokespersons for Pakistan”. This strategy, he hopes, will also help the BJP overcome the challenge posed by caste-based opposition alliances in Uttar Pradesh and Bihar.

Modi’s messaging is carried through to voters by the BJP’s social media activists, booth workers and WhatsApp groups. RSS volunteers have spread out in their respective areas to ensure maximum turnout, focusing especially on the 8.4 crore new voters. The BJP is also eyeing the 22 crore beneficiaries of various government schemes.

The Nyay scheme proposed by the Congress could, however, affect the BJP’s chances. The Congress has promised up to Rs 6,000 a month to 25 crore beneficiaries. It might work just like the loan waiver scheme which helped the Congress win last year’s assembly polls in Madhya Pradesh, Chhattisgarh and Rajasthan.

The BJP’s response might come in the party’s manifesto. Unlike the Congress which released its manifesto on April 2, the BJP is expected to unveil its manifesto just before the first phase of polling on April 11. Sources said the manifesto committee was working on the promises to be made. The committee meetings, also attended by Shah, often run into the wee hours. The BJP manifesto could contain welfare measures for farmers, along with sops for the youth and women and promises about job creation, better education and health care. It is also likely to include stronger measures to deal with national security, thus aligning with the overall campaign theme.

Still, the ambitious target of 300 seats set by the prime minister will be an uphill task for the BJP, as the party could lose many of its seats in Uttar Pradesh, Bihar, Rajasthan, Chhattisgarh and Madhya Pradesh, where it had performed exceptionally well in 2014. But Sushil Modi, deputy chief minister of Bihar, said the BJP was in a position to win 32 of the 40 seats in his state. “We have everything going right for us, including various castes represented in our alliance with the JD(U) and the LJP,” he said.

The biggest gains for the BJP could come from the east and the northeast. Despite protests over the citizenship bill, the BJP said it was ideologically committed to throwing out illegal migrants and ensuring citizenship for non-Muslim migrants from neighbouring countries. “The BJP hopes to win 22 seats in West Bengal, as groundwork has been laid,” said party general secretary Kailash Vijayvargia. The party hopes for a good performance in the south, too. Shah expressed confidence that the BJP would do well in Karnataka, Tamil Nadu and Kerala.

The 2019 elections mark a generational shift in the BJP. Shah said the BJP was not giving tickets to anyone above 75. These include L.K. Advani, Murli Manohar Joshi, Kalraj Mishra, B.C. Khanduri and Shanta Kumar. Key leaders behind the BJP’s Ayodhya movement in the 1990s have been eased out of the electoral race. So if the Supreme Court permits the construction of the Ram temple, Modi alone will claim credit.

The transition went off smoothly, with senior leaders lining up to wish Shah as he filed his nomination papers from Gandhinagar, replacing Advani. NDA allies Parkash Singh Badal of the Akali Dal, Ram Vilas Paswan of the LJP and Uddhav Thackeray of the Shiv Sena turned up to express their support for Shah. Union ministers Rajnath Singh and Nitin Gadkari, past presidents of the BJP, were also present. It was a formal endorsement of Shah’s position as the number two in the BJP hierarchy and as Modi’s likely successor.

Shah told THE WEEK about the special relationship he shared with Modi. “We both are committed party workers. This bonds us. We work for the development of the party and the country,” he said. “Our commitment is clear, and that is why there is no dispute. Modiji is my leader. He is the supreme leader of the BJP.”