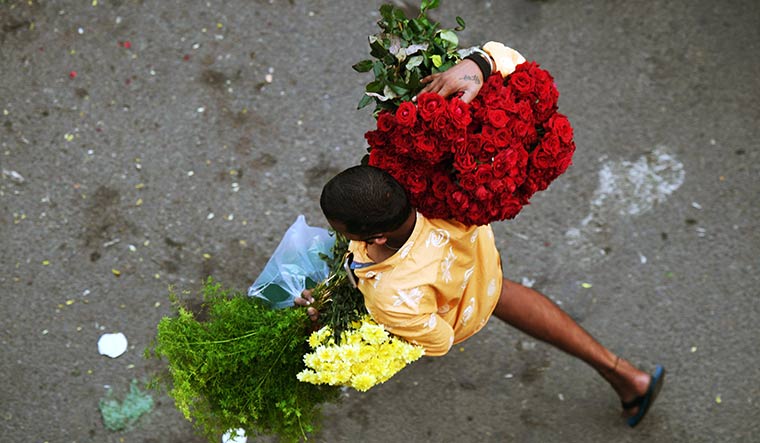 Rose Day (February 7) kicks off Valentine week, during which affections are revealed or strengthened with the exchange of roses. But, on the outskirts of Bengaluru, every day is Rose Day. Around four to five lakh roses are harvested daily in the city; the greenhouses together cover about 2,000 acres. Open field cultivation, too, produces a significant number of roses. The flowers are grown throughout the year in India’s tech capital, which has emerged as the nation’s rose basket.

The many floriculturists who migrated to Bengaluru suburbs in the 1990s have reaped rewards. Shrikanth Bollapally, who hails from Andhra Pradesh, moved to Doddaballapur near Bengaluru around 20 years ago. He grows roses in greenhouses on his 35-acre farm. Bollapally, who is president of the Flower Council of India, is from an agricultural family. But, no one in his family is into floriculture; they grow sugarcane, paddy, soybeans and sunflowers in Andhra Pradesh.

“I wanted to do something innovative in floriculture,” Bollapally told THE WEEK. “I took a bank loan and started greenhouse rose cultivation.” His business had grown and was doing well. But, Covid-19 posed a major challenge because of the postponement and cancellation of weddings and other events. “I am dependent on the Indian market,” he said. “Other big floriculturists in the area also export.” Things are slowly getting back on track for Bollapally and many others like him. 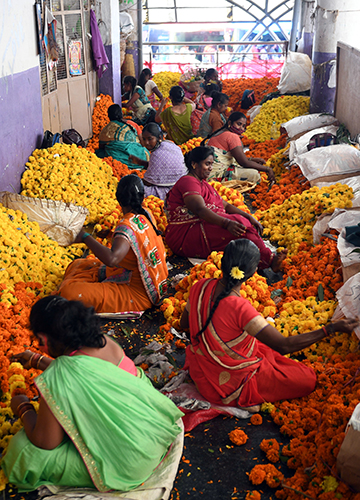 Open field cultivation has been a tradition in and around the city for a long time, while greenhouse cultivation became popular only in the mid-1990s. People used to grow garden variety roses, but greenhouses focus on hybrid varieties of Dutch roses. The Indian government was quick to recognise the potential for export. “In the western hemisphere, one cannot grow roses for six months because of the cold and if roses have to be grown in lighthouses, the energy costs go up,” said Thilak Subbaiah, a Bengaluru-based horticulture consultant, who specialises in rose cultivation. He added that roses generally grow well in places where the average temperature is between 28 to 30 degrees Celsius during the day and between 20 to 25 degrees Celsius at night.

“European countries were importing roses from Africa and Central America. So, in the mid-1990s, the government directed many banks and financial institutions to help floriculturists,” Subbaiah said. He added that this helped cover the high capital expenditure. “Initially, rose cultivation in and around Bengaluru used to depend on Israeli technology,” he said. “We imported a lot of material, but gradually home-grown innovations developed.”

The result is that greenhouse cultivation, which experts point out is only 20 to 30 per cent of the overall rose cultivation area, has already exceeded open field cultivation in terms of production capacity. The quality, too, is superior. “Open field roses have short stems and are of inferior quality,” said Subbaiah. Bollapally said the cost of setting up greenhouses could be as high as Rs50 lakh per acre (one-time investment on infrastructure, including irrigation, and plants and maintenance costs). This is in stark contrast with open field cultivation where there are no major infrastructure costs.

“Each rose bush lasts for five to six years, depending on the maintenance,” said Bollapally. “On average, an acre [in greenhouse cultivation] can grow 35,000 rose plants and one can get around 2,000 flowers per day per acre. That adds up to over seven lakh flowers per annum per acre.” He said there was huge demand from major cities across India, such as Delhi, Hyderabad, Pune and Kolkata. For domestic distribution, roses are packed in cartons and are transported by air or road. “Once the rose is plucked, it has five to six days of life—if it is maintained at the right temperature,” said Bollapally. “If it is not handled carefully, it will wilt the same day. For domestic dispatch, a temperature of 20 to 25 degrees Celsius has to be maintained. For exports, it needs to be around 3 to 6 degrees Celsius during storage and around 15 to 20 degrees Celsius in air cargo.”

The Middle East, Malaysia, Singapore, Australia and Europe are now major export markets for Bengaluru roses. The city also boasts the International Flower Auction Bangalore (IFAB)—the only organised flower auction house in India that is running successfully. It has been functional for over two decades and runs 365 days. IFAB representatives collect the roses from the floriculturists. The auction prices are transparent and a message is sent to farmers when their flowers are sold. They receive payment on every eighth day.

“There has been no default in payment for the last 20 years,” said M. Vishwanath, managing director, IFAB. He added that the auction house was registered under the Companies Act and worked in tandem with both growers’ and buyers’ associations. “On average, we get around 2.5 lakh to three lakh rose stems per day,” he said. “They are usually auctioned the same day. There has been a steady increase in growth, but it has been flat for the last two years because of Covid-19. We have more than 300 registered farmers/growers. Anyone can register with us.” He added that the pricing was based on demand and supply. “There is no lobbying during the auction,” he said. “The buyers are given tabs. The auction starts at 8:30am and goes on till around 2:30pm every day. During the festive season and close to Valentine’s Day, the auction can go on till 8pm.”

Vishwanath said the elevation of Bengaluru—over 800m—was one of the major factors that made it suitable for rose cultivation. “We get good-sized buds because of the elevation and favourable climatic conditions,” he said. He added that even in a greenhouse, the temperature can only be manipulated by around 4 to 5 degrees Celsius, and therefore the local climatic conditions were vital. He said that the prices were currently good. “The average price is 04 to 04.50 per rose stem,” he said. “If the same price continues for the next three to four months, and if the Covid situation stabilises, we can expect an increase in rose production in the area in the future.” The K.R. Market (Krishna Rajendra Market) is already one of the largest rose markets in the country. Around two to three lakh roses are sold here in a day. The market has a mix of both open field produce and greenhouse roses. But, the majority of greenhouse roses go to the IFAB and open field roses are primarily sold at K.R. Market.

Bollapally said that even the recent ban on garlands and bouquets by the Karnataka government has not had a major impact on rose cultivation. He added that the ban notwithstanding, the government has been supporting the business and has given subsidies to floriculturists. “Now, we are even seeing professionals such as doctors, engineers and lawyers getting into the rose cultivation business,” he said.

But, not everything is rosy in the rose cultivation business. Labour and water shortage are major issues. It is believed that 60 to 70 per cent of the labourers at rose farms in and around Bengaluru are migrants from Bihar, Uttar Pradesh, Chhattisgarh and Jharkhand. Subbaiah said pests and diseases were also challenges. So, the new entrants will need to prepare for such problems. As the saying goes, there is no rose without thorns.