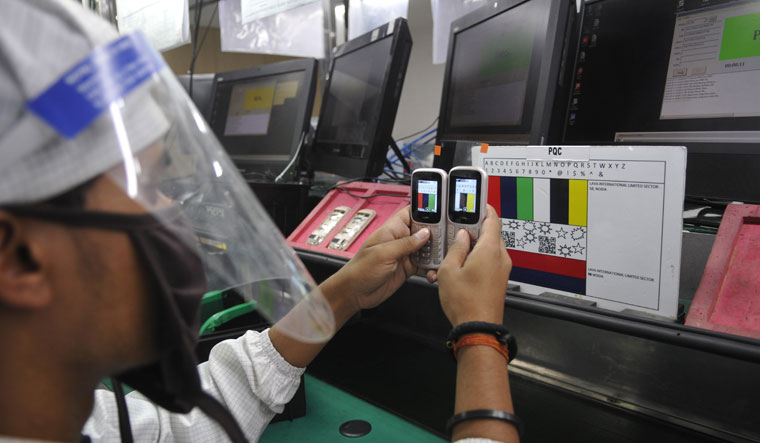 Back to work: Operations resume after relaxation in lockdown restrictions at the Lava factory in Noida | Getty Images

I juggle many lives. My friends, my work, my passion,” says actor Hugh Jackman, his hazel eyes staring intently at the viewer, plugging Canvas, the flagship smartphone from Micromax. “It’s nothing like anything!” he declares with a flourish.

And why not? Indian phone brands were dazzling the domestic market with feature-packed smartphones priced below the Samsungs and the BlackBerrys. In the process, brands like Karbonn and Lava, besides Micromax, held about half of the market between themselves. Replicating the success on the international stage seemed like the next logical step.

Then, everything went horribly wrong.

A sleek, sly enemy surreptitiously crossed the border, raining on the ‘Make in India’ pawri. Chinese phone brands, till then labouring under an image of being cheap and unreliable, suddenly upped their game. A slew of brands like Xiaomi, Huawei, Oppo, Vivo and OnePlus swooped in and took over the market, almost without breaking a sweat. They floored the Indian customer with models packed with amazing features at unbelievably low prices. The arrival of Jio and cheap data plans in 2015 led to the mass adoption of smartphones, catalysing the Chinese takeover of the market. Soon the Indian brands disappeared.

“(Chinese phone brands) offered quality products at good prices,” said Shilipi Jain, research analyst at Counterpoint, a global consulting firm specialising in telecom. “(The Indian brands) were forced to fall back. They could not compete with the value proposition of the Chinese.”

Ironically, another Chinese incursion in 2020, this time a military one, seems to have triggered a comeback of the Indian brands. Shortly after the bloody India-China border skirmish in Ladakh, Micromax co-founder Rahul Sharma threw down the gauntlet. In a video that went viral, he quipped, “border pe jo huwa, woh tik nahin huwa! (What happened at the border wasn’t right),” and declared that Micromax was making a comeback.

“A comeback was inevitable,” Sharma said. “Our endeavour is to provide the new-age Indian consumers with a bonafide Indian option that is one-up in technology and offers flaunt-worthy tech that not just outdoes the competition, but also drives the Indian economy and our collective vision of AatmaNirbhar Bharat.”

Micromax has released two smartphone models since then, both under the ‘IN’ brand. A third model is scheduled to come out around Holi.

Sharma is not alone. On Republic Day, Lava’s ingenious ‘My Z’ and ‘ZUp’ plans went live. Perhaps an industry-first, these ‘made-to-order’ plans allow customers to upgrade or customise their phone in 66 options, including increasing the ROM, RAM and camera. “Lava (is) the first company in the world to accomplish such a unique milestone,” said Sunil Raina, president and business head, Lava International. “With this unique innovation, we will save customers’ money, avoid the hassle of transferring data to a new phone, while ensuring environmental safety and offering protection from e-waste.”

The important question is, have they learned from the past? “These companies have now matured and have years of experience and understanding of the sector behind them,” said Nitin Kunkolienkar, president of Manufacturers Association of Information Technology (MAIT). “This puts them in a position to build on this capability. Their prospects are good.”

The Chinese brands did take a beating in the days following the border clashes. In the quarter ended in June 2020, the share of Chinese mobile brands fell from a peak of 81 per cent of the total market at the start of the year to 72 per cent. Soon, for the first time in more than two years, Xiaomi lost its position as India’s largest selling smartphone brand to Korea’s Samsung.

While the desi brands talk big on patriotism, less mentioned is the real proposition that made their comeback possible—PLI, or ‘production linked incentive’, which offers a sort of ‘cashback’ from the government in lieu of incremental sales from local manufacturing units. The PLI scheme brought in by the Centre in April 2020 for mobiles was aimed at attracting global manufacturers to ‘Make in India’. It might have scored a biggie with Apple, but it has also come as a bonanza for the beleaguered Indian brands, too.

In the Union budget last month, Finance Minister Nirmala Sitharaman hiked the import duty on various mobile components, a move aimed to force more component manufacturers to set up shop in India. Mobile making in India still remains predominantly an assembling exercise rather than a manufacturing one. “When at least a sizeable number of components that go into mobile phones are made in India as part of AatmaNirbhar Bharat, it would help India localise component production and thereby save a large quantum of foreign exchange,” said Sandeep Narula, chairman, Electronics and Computer Software Export Promotion Council. This would further help them with cutting costs.

Practical realities of a tough market apart, can just a steady dose of nationalism laced with a small price advantage be enough to propel the Indian brands back to their glory days? After all, it is not like the Chinese brands have left. And, apparently, anti-China sentiments do not last long. Indications are that Chinese brands are in a recouping mode. “Anti-China sentiments have subsided as consumers weigh in on different parameters during purchase,” said Jain.

While PLI would give them a cost advantage, putting all their eggs in the ‘low price’ basket might not be a good idea, as the Indian companies know by now from their past experiences. “Consumers in the 10K segment (phones that cost Rs10,000 or less) are not brand loyal. When they get a better option, they go for that,” said Jain.

This is why Micromax is ramping up its manufacturing capability and developing a 5G phone, while Lava has been inviting design entries for their next set of smartphones, even while trying unique propositions like its ‘made-to-order’ plans and models designed specifically for women.

“Indian brands will have to be really on their mark to compete on specs, as the Chinese are very strong here,” said Jain. “They need to develop their design team, R&D and manufacturing. It will take a lot of effort and time to make that kind of presence again.”

From Nokia to BlackBerry, the saga of the world’s biggest consumer category shows that fortunes can be made, and lost, virtually overnight. Then again, fortunes that are lost can perhaps be made again, too. Smartphone sales figures at the fag end of 2020 show that Indian brands, just weeks after their relaunch, have already grabbed 1 per cent of the market.