All in on spending 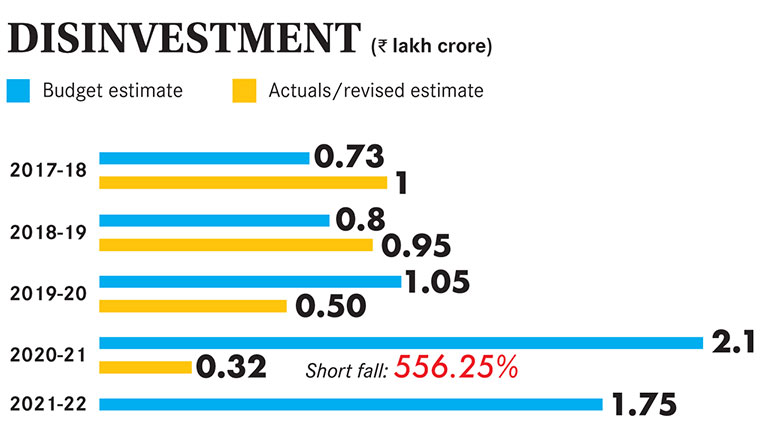 TO SPEND OR NOT to spend, that was the question in front of Finance Minister Nirmala Sitharaman ahead of Union budget 2021-2022. The prevalent expectation was that the government would spend big to lift India out of recession. But, the bruising pandemic meant that lack of funds was a serious concern. It has become clear from the budget that Sitharaman decided to spend in critical areas like infrastructure and health care, hoping that as the economy rebounds the Centre’s coffers would fill up again.

But, the decision to spend more to spur growth has generally been welcomed. Sonal Varma, chief India economist at Nomura Securities, said the government’s decision to accelerate spending, a reversal of earlier strategy, reflects its view of higher growth as a pre-condition for debt sustainability. The higher deficit though is not just because of higher spending. Jonathan Sequeira and Andrew Tilton, Goldman Sachs economists, noted that fiscal deficit is higher than expected in FY21 and FY22 “primarily because of a one-off move to repay arrears due to the Food Corporation of India, and include all food subsidies on the budget going forward”. But they added that spending seems likely to ramp up significantly over the next few months. 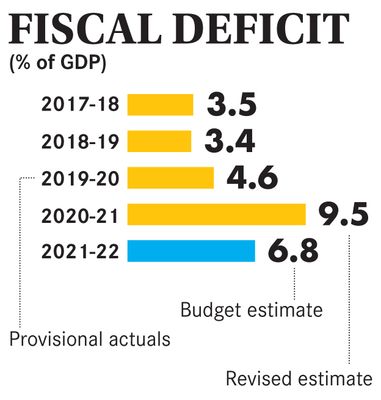 The government is funding the higher fiscal deficit through debt. It plans to borrow Rs80,000 crore from the market in the next two months. The gross borrowing for next year has been pegged at around Rs12 lakh crore, also higher than expectations. This is likely to weigh on bond yields; the plan to increase borrowing has already led to bond yields rising. The Centre hopes that tax buoyancy, and disinvestments of public sector undertakings (PSUs) and monetisation of assets will help it return to the fiscal consolidation path.

Disinvestment is estimated to yield 01.75 lakh crore in FY22. The Centre hopes to complete stake sale in assets such as the Bharat Petroleum Corporation Limited and Air India, and privatise two state-owned banks and one general insurance company. The initial public offering of insurance behemoth LIC is also expected to be completed in FY22. The government has also increased the foreign direct investment limit in the insurance sector to 74 per cent. But, achieving the disinvestment target will be a tall order. The revised estimate for FY21 was Rs32,000 crore against a target of Rs2.1 lakh crore. Disinvestment proceeds in the last five years have averaged 0.4 per cent of the GDP, and therefore the FY22 target (0.8 per cent) appears ambitious, said Sequeira and Tilton.

Asset monetisation is going to be a key financing option, from Railways monetising its dedicated freight corridor assets to warehousing assets of PSUs, airports in smaller towns and sport stadiums. “Aggressive disinvestment and the monetisation of government assets, if effectively executed, will help balance the fiscal equation,”said Arun Kumar, chairman and CEO of KPMG in India. “This is preferable to [tax hikes] at this juncture.”Direct and indirect taxes were by and large left unchanged and the long-speculated Covid-19 cess was not announced.

Experts say that additional capital expenditure has the potential to boost GDP by up to 1.3 per cent over the medium term and that it is necessary to spend more in areas like infrastructure to move to 7 per cent to 8 per cent long-term economic growth. M. Govinda Rao, chief economic adviser, Brickwork Ratings, and member, 14th Finance Commission, said: “Although the economy is in recovery, there are hopes of continued support through elevated public spending.” But, if additional borrowing does not deliver on capital spending and growth, there is a risk as the borrowings will be difficult to sustain, said Suman Chowdhury, chief analytical officer at Acuite Ratings and Research.

Management of public finances is going to be key as government debt is likely to be around 90 per cent of the GDP over the next few years. That and the weaker fiscal roadmap over the medium term would have raised concerns among rating agencies. “Rating agencies may view the budget as slightly more negative, given their focus on medium-term fiscal finances,”said Varma of Nomura. “We believe the budget may have increased the probability of a downgrade from Fitch.”In June 2020, Fitch had revised the outlook on India’s long-term foreign currency issuer default rating to negative from stable, citing significantly weakened economic growth because of the pandemic. On February 2, it warned that the deficit target presented in the budget was higher, and the medium-term consolidation was more gradual than expected.

“The budget highlights the challenges to stabilising India’s debt trajectory following the Covid-induced economic shock,”said Gene Fang, associate managing director (sovereign), Moody’s Investors Service. “Although, a decline in new Covid-19 cases and normalising activity are driving an economic rebound, the lasting effects of the pandemic on the economy will continue to pose downside risks to sustained growth in the medium term.”