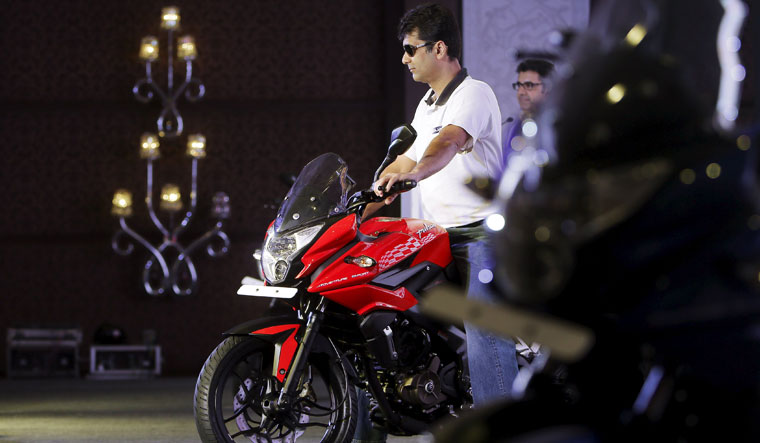 The World’s Favourite Indian.’ That is the tagline of Bajaj Auto. And why not? The Pune-based company exports motorcycles to 70 countries. Bajaj, however, is not the only favoured Indian among bike makers. TVS Motor and Hero MotoCorp, too, have over the past decade found plenty of customers overseas. Indian companies are among the leading players in many markets in Africa, Latin America and Southeast Asia.

Bajaj’s motorcycle exports in October surged 29 per cent year-on-year to 2,01,659 units, its highest ever. In September, too, the company had reported record exports. TVS Motor’s two-wheeler exports grew 46 per cent last month to 80,741 units, from 55,477 units a year earlier. Hero MotoCorp’s exports in October rose 28 per cent to 15,711 units.

Chinese companies once dominated the African continent with their cheap motorcycles. The only other option in these markets used to be expensive Japanese bikes. Indian bikes hit the sweet spot in between, of quality and price. In the year ended in March 2020, exports accounted for 42 per cent of Bajaj’s sales (21,71,105 units, including 18,69,220 motorcycles) and Africa accounted for 53 per cent of it. In many markets, Bajaj is the first or the second player.

Srinivas Kantheti, who worked with Bajaj Auto before co-founding the two-wheeler financier WheelsEMI, attributes the success to creating a research and development base in India and creating a brand worldwide. “Opportunity was available 20 years ago in Africa and South America, but they were dependent heavily on either the Japanese two-wheelers, which were very expensive, or very cheap Chinese exports. In those days in places like Nigeria, China used to sell motorcycles out of a box. You get it assembled from a local mechanic. This is where Indians, Bajaj first and then followed by TVS, saw their opportunity of creating a market here, which almost gives Japanese quality at a price slightly higher than that of the Chinese,” he said.

In several African countries as well as in a few markets in Latin America, bike taxis have become a popular mode of transportation and it is here that the sturdy build quality and competitive pricing of Indian bikes found acceptance. Indian companies have inked local distribution, retail and service partnerships in these markets, thus establishing a strong brand presence there. “Our international business is not a B2B business. It is not that we sell to some distributors and forget about it. It is a B2B2C business,” said Rakesh Sharma, executive director of Bajaj Auto.

Royal Enfield, owned by Eicher Motors, has now 660 outlets around the world, including 585 multi-brand outlets and 77 exclusive stores. In the year ended in March 2020, it added 35 overseas outlets with a focus on Thailand, Brazil, Argentina, France and the UK. It exported 39,296 units in 2019-2020, which was a 89 per cent jump over the previous year’s exports of 20,825 units. Enfield is now starting local assembly operations in Argentina. This will be the first such assembly plant outside Chennai.

Hero MotoCorp, the world’s largest two-wheeler maker by sales, does most of its business in India. A key reason for this was its erstwhile joint venture with Honda, which restricted its expansion overseas. Though as it has been going solo since 2011, the company has just begun expanding in markets like Latin America. “With the appointment of a new distributor in Peru, we have now expanded our global footprint to more than 40 countries in FY2020, up from just four countries in FY2012,” Pawan Munjal, chairman and managing director of Hero MotoCorp, told the company’s shareholders recently. Hero is looking to revive its scooter market share in Asia with new models and also deepening its financing network. It has gained a strong foothold in Bangladesh.

Bajaj has incorporated a wholly-owned subsidiary in Thailand. It has also received local approvals to set up an international business centre and a research and development centre under this subsidiary. This R&D centre will be Bajaj’s first one outside India, and will oversee the company’s business operations across the ASEAN region.

TVS Motor is looking to boost its export volumes over the next three to five years and aims to improve its exports from its Indonesian plant. In April, TVS acquired British motorcycle company Norton. Sudarshan Venu, joint managing director of TVS Motor, sees immense opportunity to scale the brand globally.

Frugal engineering has helped these companies design and develop motorcycles for export. “In less-than-150cc category motorcycles, there is no better place to design it than in India,” said Srinivas. “Now, it is going above to 200cc-250cc also.”

Not surprisingly, Honda Motorcycle and Scooter India, the Indian unit of Japan’s Honda, now exports 18 two-wheeler models to 25 export markets in Asia and Latin America. In October, it began exporting SP125, its new motorcycle, to Europe.

Some of the biggest names in motorcycles are now joining hands with Indian companies to develop new products. British bike maker Triumph has a partnership with Bajaj Auto to develop a new range of mid-capacity motorcycles and the first product is expected to be launched in 2022. TVS has an alliance with German auto giant BMW’s motorcycle division, BMW Motorrad. In September, iconic American brand Harley-Davidson announced its plan to pull out of India; in October it announced a partnership with Hero MotoCorp. Hero will sell and service Harley-Davidson motorcycles, and will develop and sell a range of premium motorcycles under the Harley-Davidson brand through a licencing agreement.