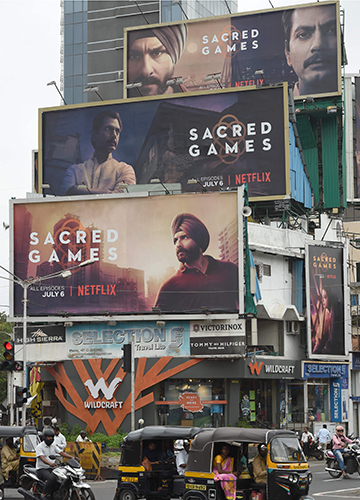 The big push: Billboards in Mumbai announcing the debut of the Netflix series Sacred Games | AFP

The medium has become the message. A combination of transformative technology and changing viewing patterns has spawned a new method and mode of entertainment that is taking India by storm.

The new paradigm is called OTT, tech jargon for over-the-top media streaming platforms that provide audio and video content over the internet. The young and the old, especially in cities, have so taken to platforms like Netflix and Hotstar that OTT itself has become urban slang, along with related phrases like binge-watching (watching multiple episodes of a programme in rapid succession) and ‘Netflix and chill’ (watching Netflix with a romantic prospect).

Another buzzphrase is ‘cutting the cord’, which refers to disconnecting cable and direct-to-home subscriptions and getting your fill of entertainment purely through OTT. “I have cut the cord; I now watch only OTT platforms,” said Mehak Joshi, who works with the ad agency FHO in Delhi. “I am a busy person. I want to watch short films or limited series—stuff that I like—at my convenience.”

Mehak is in her twenties, but the OTT craze is not limited to Gen X, Y and Z. “My grandmother in Punjab has also quit watching TV,” she said. “She now watches the stuff she wants to watch, on-the-go, on her smartphone.”

Jeetender Kumar, a housekeeper at a condo in Gurugram, asked his employer for an extra Diwali perk as he got his festival bonus and prepared to leave for his home in Uttar Pradesh. “I asked saab for his Amazon Prime Video password, so I could watch some of the Hindi shows [on the OTT platform]. They are quite slick and edgy!” Kumar said.

OTT is no longer a metro phenomenon—services increasingly percolate to tier-III and tier-IV cities, and even small towns and villages. Nor is OTT a preserve of the youth; a Boston Consulting Group (BCG) study said women and older people would be the key drivers of OTT growth. Thanks to one of the lowest mobile data costs on the planet, India now has the world’s highest average per capita mobile internet consumption—13.9GB a month, according to the latest Ericsson Mobility Report.

No prizes for guessing what most Indians are using it for. According to Manish Chopra, director and head of partnerships at Facebook, 75 per cent of all data consumed by Indians is used for watching videos. “And we are still at a very early stage of this entertainment revolution,” he said.

The OTT revolution is a product of technology—like faster internet speeds and affordable handsets. Unlike in the west, most Indians access OTT on their phones. The decisive factor, though, is convenience. You can access programmes through any device, and watch them as much, or as little, as you want. “If I like a scene, I can repeat it,” said Mehak. “And if I want to skip a song while watching a film, I can do that, too.”

Then there is content, which all OTT platforms focus on. Early this year, the final season of Game of Thrones had die-hard fans waking up early on Monday mornings to catch episodes, instead of choosing to wait till Tuesday night to watch censored versions on satellite TV. The buzz generated by Netflix shows like Sacred Games and Stranger Things this year has become the stuff of legend. 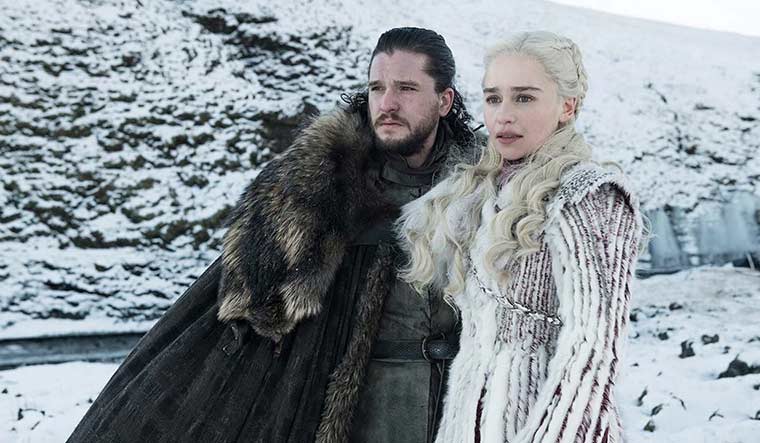 Vying for eyeballs: stills from game of thrones (english, available on hotstar).

OTT platforms are spending billions of dollars on creating captivating original content—like films, docu-dramas and stand-up specials. It means viewers are spoilt for choice. “We are aiming to create big, bold and pathbreaking content,” said Varun Narang, chief product officer at Hotstar, which is owned by Star India.

Indeed, bold seems to be the buzzword—many OTT shows feature graphic violence, sex and foul language, something you do not normally see on regular TV, which is overrun by saas-bahu and mythology dramas.

There is no reliable estimate of the total number of OTT users in India, but a majority of the 50 crore internet users in the country watch OTT content, one way or the other, on a regular basis. Most viewers watch the free content available on YouTube, Google’s ad-driven platform, and Hotstar, which has both free and premium sections. But the number of viewers paying to subscribe to platforms like Netflix or ALTBalaji is increasing. 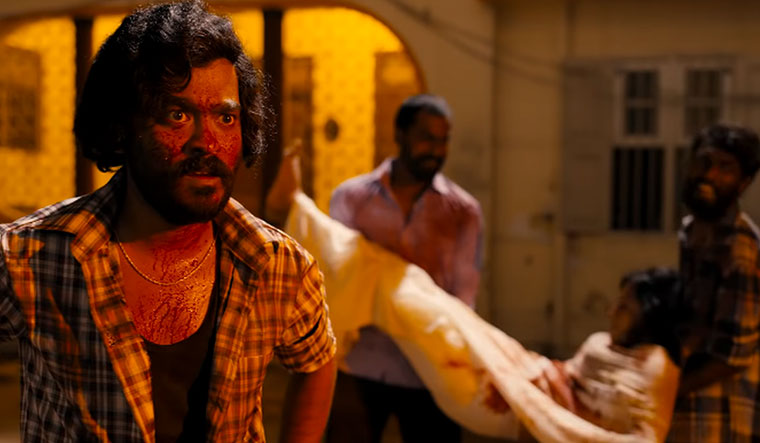 Netflix and Amazon Prime initially wooed urban, English-speaking audiences with top-notch shows like The Crown and The Marvelous Mrs. Maisel, but they eventually had to venture into producing Indian shows like Sacred Games and The Family Man to gain across-the-board acceptance. Netflix, despite being a global leader, has just 5.2 lakh subscribers in India—just a fraction of Hotstar’s 300 million users. Hotstar has been riding on its gargantuan library of desi content, sourced from its bouquet of channels in the Star network.

Considering the rising popularity of content in Hindi and regional languages, the road ahead for OTT in India is clear—go local. In four years, says BCG, almost half (around 65 crore) of India’s internet users will be from villages, and most of them would access OTT platforms through their phones. “OTT could become the primary source of entertainment, once the masses have access to high-speed internet, smart devices and easy digital payments,” said Girish Menon, partner and head (media and entertainment) at KPMG.

KPMG estimates digital media revenues in India to cross 038,600 crore by 2022. PricewaterhouseCoopers says the OTT segment in India is growing at double the global rate. Projections like these have attracted some of the world’s biggest content providers to India—the latest being Apple TV+ (launched this November) and Disney+ (to be launched soon). 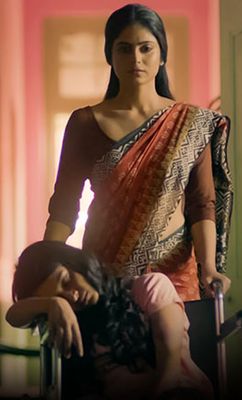 First off the mark with their OTT platforms were homegrown television biggies like Star (Hotstar, launched in 2014), Sony (SonyLIV, 2013) and Zee (first with DittoTV in 2012 and OZee in 2016, which were later consolidated into a new platform called Zee5 in 2018). Hotstar made a space for itself by live-streaming Indian Premier League matches from 2015 onwards, and OTT became a buzzword after the India launch of global leaders Netflix and Amazon Prime in 2016.

The advent of cheap data plans and affordable smartphones soon brought about an OTT boom. Netflix and Amazon Prime had a lot of momentum, thanks to their treasure trove of gripping original content, besides their hyper-marketing strategies and freebie deals offered through telecom providers like Airtel and Vodafone.

Interestingly, these strategies helped the whole industry grow, not just Netflix and Amazon Prime. An array of local players jumped into the fray—such as Voot (from Viacom 18, which owns channels like CNN-TV18 and Colors), MX Player (from the Times of India group), and ShemarooMe and ErosNow (owned by film production and distribution giants Shemaroo and Eros Entertainment).

Even non-media players like Flipkart and Zomato have jumped on the OTT bandwagon. An e-commerce giant, Flipkart wants its platform to attract internet users in tier-II and tier-III cities to shop on its site. Being in the food delivery business, Zomato is creating OTT programmes that revolve around food, travel and health. “We have always attempted to broaden the interpretation and understanding of food through content,” said Durga Raghunath, Zomato’s senior vice president. “You can’t possibly watch all these food shows and not get hungry!”

But, with so many players around, is a shakedown in the offing? Sanjay Reddy, managing director of the Hyderabad-based digital content company Silly Monks, thinks so. “There are 43 OTT players now,” he said. “Not all will become viable. Some will merge; some will cease to exist.”

Kranti Gada, chief operating officer at ShemarooMe, disagreed. “We have more than 800 channels on cable; [40+] OTT players is nothing,” she said. “The landscape will evolve, and we will see a lot of partnerships and collaborations.” 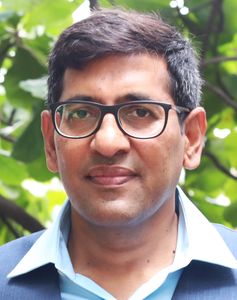 “We are in conversation with other key digital players to expand,” said Pallavi Puri, chief commercial officer, Tata Sky. “The consumption pattern is changing, so it is necessary to cater to each segment of the audience.”

For DTH players like Tata Sky, the shift to OTT is a sensible move. A recent KPMG study said that as many as 1.5 crore households disconnected their cable and DTH connections in the first three months of this year.

As a medium, OTT offers a more personal viewing experience than cinema or television, which is often watched in the company of family or friends. “A mass of niches” is how KPMG’s Girish Menon describes the OTT bouquet. “There are significant differences in the way content is consumed by, say, a user in Delhi and a regional language-speaking user in the south,” he said.

But that is easier said than done. “Every piece of content has to be carefully scrutinised and curated,” said Kranti Gada of ShemarooMe. A mass entertainer like Golmaal, she said, is better off in the ad-driven section of the OTT, while something like Vodka Diaries, which works well with a niche, urban audience, can do well on the subscription side.

Artificial intelligence plays a big role in curating content. Eros Now, for instance, has tied up with Microsoft to develop a next-generation platform with intuitive features, AI tools and a personalised recommendation engine to attract more users.

Ultimately, though, OTTs have to bank more on content creation than technology. A plethora of A-listers in India have been joining the mad rush for creating original content for streaming platforms. The list includes director Anurag Kashyap, who helmed Sacred Games, and Shah Rukh Khan, who produced the new Netflix show Bard of Blood. “Content is surely king,” said Sanjay Reddy of Silly Monks, “and that will keep OTT ahead of the competition.”