The telecom sector is looking at an existential crisis It is no news that India’s telecom sector has been in trouble owing to a fierce price war and high duties and fees. But the quarterly results released last week have raised serious questions about the future of the sector and thousands of jobs. In the July-September quarter, the losses of four companies—Vodafone Idea, Bharti Airtel, Reliance Communications and Tata Teleservices—totalled up to around Rs1,06,444 crore. A big chunk of this amount is to make provision for payment to the government after the Supreme Court upheld the Department of Telecom’s definition of adjusted gross revenue (AGR).

AGR is the usage and licensing fee paid to the DoT by telecom operators. There was a dispute between the two parties on how to calculate the amount payable. The companies will now have to pay 092,642 crore to the government, which includes the original charges, interest and penalties.

“The sector is already reeling under a debt of around 04 lakh crore and is in dire financial straits as operators are making negative returns on their investments. The telecom EBITDA (earnings before interest, tax, depreciation and amortisation) continues to contract, while the interest expense of the industry continues to increase. With more than 1.19 billion subscribers, the sector is a key contributor to the Indian economy in terms of consumer benefit, employment and revenue generation, and contributes 6.5 per cent to the GDP,” said Rajan S. Mathews, director general of the Cellular Operators Association of India. He said the taxes and levies in the Indian telecom sector, which range from 29 to 32 per cent, are among the highest in the world. 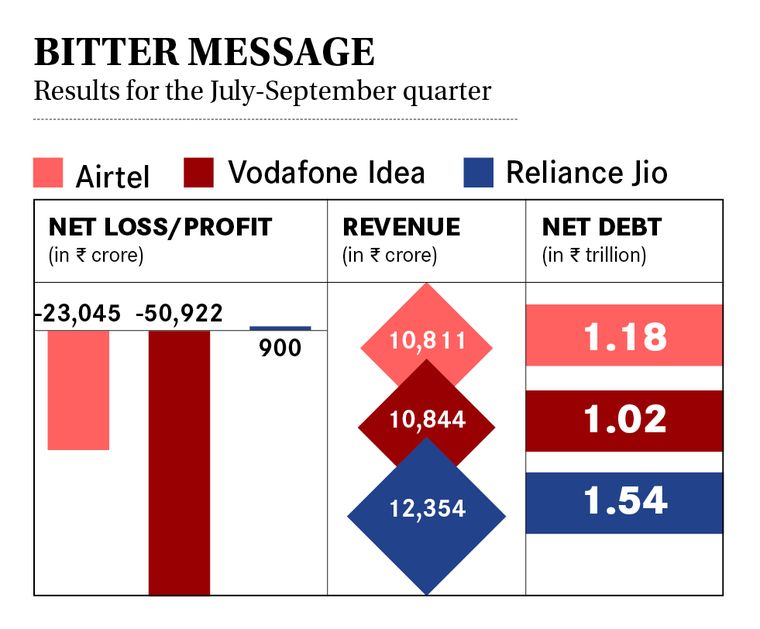 Finding a solution for the problem, say many experts, will be in the interest of the sector and country. “The AGR issue is a sensitive one and a solution should be a win-win for the government, the customer and the industry,” said T.V. Ramachandran, president of Broadband India Forum. “In the past also the sector had faced many challenges. In 1997 and 1998, when the sector was expected to collapse, a new National Telecom Policy (1999) saved it. It was then that the existing operators were migrated to a new revenue sharing policy. It was not a bailout package, but a quick settlement. There was a crisis in 2002 and that was also sorted out through an out-of-court settlement.” Ramachandran was the first CEO of Sterling Cellular, the predecessor of Vodafone India.

These companies are now struggling to find funds to cater to their accounts payables. Considering the magnitude of the payables, they will have to find financiers and sustain their confidence for a long period of time. They are looking at bankruptcy if they are not able to do that.

“Telcos are behemoths, and they employ a large number of people, service crores of subscribers and have accounts payables with hundreds of other companies in the ecosystem. If they fail, it would be too risky for the economy,” said Aditya Narayan Mishra, director and CEO of CIEL HR Services. “Right from the companies in the telecom tower business to equipment suppliers, engineering service providers and many others would lose huge sums of money.”

The government has expressed its willingness to resolve the issue, as an important sector falling apart would dent its business-friendly image. Finance Minister Nirmala Sitharaman had said that the government intended to address the concerns of the sector and was not in a hurry to recover the dues.

“It is not a comfortable thing for a government and the business sentiment it wants to portray to the world at large to have its major telecom networks collapse under the burden of debt,” said brand expert Harish Bijoor. “The second fact is that many jobs will be lost due to this crisis. As it is, there are job losses in different sectors. No government wants it to balloon out of proportion.”

The loss of jobs, in fact, is something the government wants to avoid at the moment. Kris Lakshmikanth, founder of the executive search firm Head Hunters India, said that in the past few months many operators sacked thousands of employees primarily from the lower-end operational and temporary sales roles. “If things do not improve there could be further job cuts in the sector. I feel that in the long run, even some senior and mid-level people may lose jobs,” he said.

To address the issue, the government will have to make significant changes in the spectrum pricing methods. Ramachandran said spectrum reserve prices are unrealistic and unaffordable for the industry. “That accounts for the major portion of the debt of the industry and it needs to be resolved. Also, the total duties on the sector are well above international standards. Since the spectrum is sold by auction, there is no basis for the high license charge. It needs to be addressed on a priority basis. Investors do not need special incentives; all they need is a fair marketplace and reasonable regulations,” he said.

A fair marketplace would also serve customers better. “While the tariffs have been going down over the years, quality of service has been a huge concern,” said Mishra. “If any of the companies fail, it might further pull down the service standards and the drive for excellence will slowly decline. The future of the sector hinges on finding a way forward for financing the liabilities of the companies.”

The AGR issue may have repercussions on the 5G plans of many companies as well. Bharti Airtel and Vodafone Idea have applied to participate in 5G trials, but it remains to be seen if they will be able to afford the spectrum and the gear.