A cryptocurrency ban could tank an emerging startup industry in India 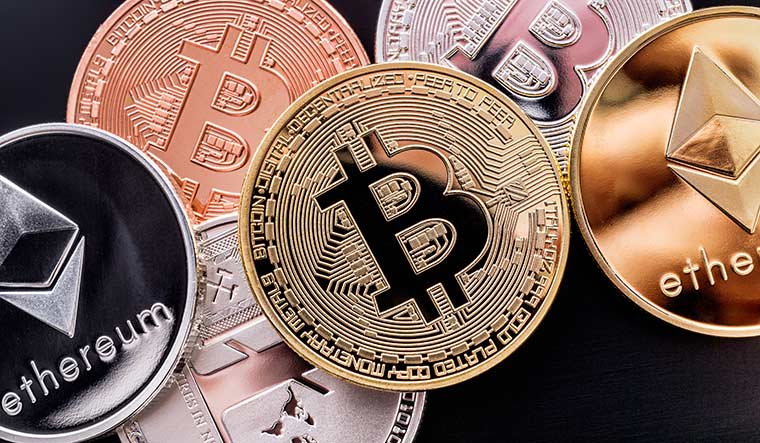 In 2018, World Bank estimates said that remittances to low- and middle-income countries had reached record heights. The annual remittances were a staggering $529 billion; the top recipients were India ($79 billion) and China ($67 billion). In Kerala, which boasts a large number of expatriates, remittances jumped by 14 per cent in 2018. But, through what avenues?

Saras (name changed) is a laboratory technician in Sharjah. “The remittance service that I use charges AED 17 for every AED 750 [nearly Rs14,500],” he said. “Some of them [blue-collar workers] depend on hundi [hawala] systems. The remittance rates are a drain on their resources, and most of them do not have bank accounts. They pay the hundi dealers in lump sums or instalments, which will then be delivered to their homes abroad.”

Hundi is so widespread among lower wage labourers that Pakistan (nominal GDP of $300 billion) estimated in 2015 that $15 billion was being transacted annually through the system. Even upper middle-class expats find the traditional remittance process cumbersome. “Sometimes, people here wish they could send money over WhatsApp,” said Saras.

Perhaps, a million such thoughts transmuted into skywriting, blazoned in red in the sky above Menlo Park. Tech giant Facebook, on June 18, announced the launch of its own cryptocurrency—Libra. In its mission statement, Facebook said it would be a “simple global currency and financial infrastructure that empowers billions of people”, a “reliable digital currency that can deliver on the promise of internet of money”, and “helping connect the world in a unified financial ecosystem, with open, instant, low-cost movement of money”. Libra, Facebook announced, would be backed by a basket of currencies to hedge against the kind of volatilities that plague cryptocurrencies like bitcoins.

The day the Libra project was announced, there was a public outpouring of anger. Facebook’s Libra lead David Marcus was hauled over coals by the United States Congress, who called the company “untrustworthy” and “dangerous”, and even akin to “Osama bin Laden [9/11 terror strike]”. One thing seemed clear though—the launch of Libra, rather than posing a challenge to the existing virtual currencies, would mainstream them and push the market years ahead of schedule.

On July 22, the Indian finance ministry released the recommendations of the Subhash Garg committee, which was constituted to study cryptocurrencies in India. The committee concluded that virtual currencies inherently lacked value, and recommended that they be banned in India. At the same time, the report claimed that distributed ledger technology (DLT)—the architectural backbone of cryptocurrencies—and associated solutions should be encouraged in India. Software mogul John McAfee tweeted in response: “India announces it plans to ban all crypto. Banning mosquitoes after a rain in the summer would stand a better chance of being enforceable.” 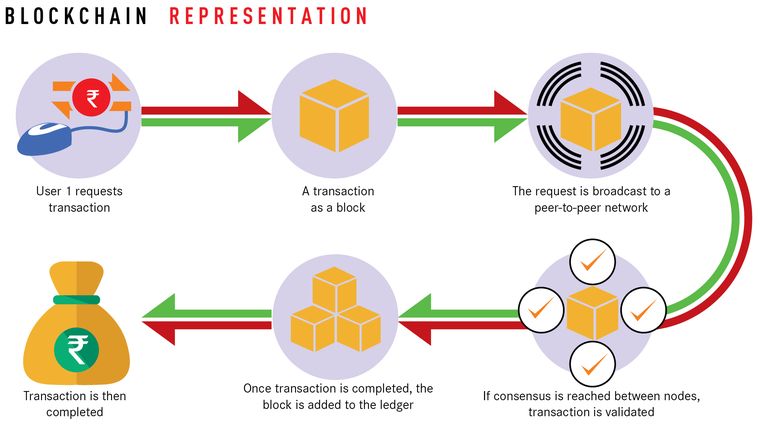 WHAT ARE CRYPTOCURRENCIES? They are virtual currencies without a central issuing figure like a sovereign bank or an institution; they can be anonymous and impossible to trace. Bitcoin is the cryptocurrency with the highest market dominance. To understand cryptocurrencies is to understand the underlying technology—DLTs and blockchains.

What is a blockchain? In simplest terms, it is a decentralised ledger or a digital file—which cannot be amended under any circumstance—where there is no central authority for storage of data. It employs peer-to-peer mechanisms for data distribution.

Say User 1 wishes to transfer 20 units of a currency to User 2. In normal context, a bank acts as a central controlling unit and guarantees the transfer. In contrast, there is no centralised authority in blockchain. Instead, every user is in possession of the digital ledger.

All records are permanent; they cannot be retroactively amended, only appended. Since there is no single central repository, and as records are distributed among all the nodes, it is practically impossible to hack into. To recap, a blockchain in essence is DLT with a cryptographic consensus mechanism on top.

BITCOIN IS AN example of a “permissionless” blockchain system, which anybody, anywhere can join. Here, the cryptocurrencies are “mined”. Put very simply, mining is the process of participation in the consensus creation in a blockchain, and verifying and processing transactions. As the blockchain has no centralised authority, it depends on the participant nodes to keep the system functional. Processing transactions require computing power. The more you invest in computing power, the more you receive in incentive in the form of crypto-tokens—bitcoins in this case (proof-of-work consensus). There is a set limit of 21 million bitcoins available, out of which 16.95 million have already been mined.

Libra is an example of a “permissioned” system. These are usually run and managed by consortiums—the Libra Association which comprises 25 entities including VISA, Mastercard, Uber and Lyft. There is none of the anonymity that a permissionless or a public blockchain offers. To run a node, you need prior approval—in the case of Libra, you have to be whitelisted by the Libra Association with adequate Know Your Customer (KYC) procedures. That is, the decentralisation is diluted to an extent. Here, performance and speed are prioritised. In the case of Libra, however, the white paper is dangerously opaque on the finer details. How much stake in Libra does Facebook own? If a data leak even a fraction of the size of the Cambridge Analytica fiasco occurs, is Facebook prepared to deal with this? Who should the regulators and watchdogs approach for accountability, if, like other members of the consortium, Facebook keeps just one vote in the governing council? 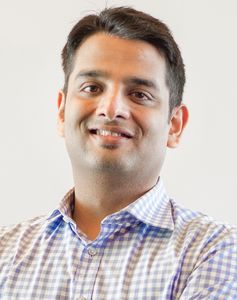 In India, states like Telangana, Andhra Pradesh and Rajasthan are already well into transferring land records—to prevent its rampant falsification—into a blockchain system. Maharashtra is working on an ambitious e-health records project. But, how does all this translate to the social realities of India, where only a quarter of the rural population has access to a smartphone and stable internet? At this point in time, is blockchain a right solution to a wrong problem?

Take the case of Dullopur village in Dindori district of Madhya Pradesh. The tribal residents in and around the village were caught in a perpetual debt cycle imposed by local loan sharks, in the absence of nationalised or private bank branches. “The interest rates would sometimes be as high as 80 per cent per annum and someone who might have sought a loan of just about Rs1,000 would end up paying thousands of rupees over years as the interest accumulated,” Samhar Singh Paraste of Dullopur said. But, things changed for them in 2008. Now, Dullopur boasts of its own fully operational ‘bank’. People from 14 villages came together to pool in a corpus—ranging from anything between Rs20 and Rs100—and registered a cooperative credit society.There are thousands of other villages like Dullopur, most of them completely at the mercy of cut-throat money-lenders, excluded from the country’s traditional financial networks.

Land fraud, for instance, is another issue that blockchain solutions can wipe out. In Madhya Pradesh, for instance, in 2017, hackers accessed the digitised land database, falsified records and mortgaged the land without the knowledge of the owners, who were mostly farmers. The newspapers dubbed it a scam bigger than the notorious Vyapam scandal.

Identifying the right problem statements, Indian startups are fast expanding into this space. Take the case of blockchain solution Param.network, an enhanced ledger that captures the entire commerce lifecycle—quotation, purchase order, invoice, payments and receipts. “Blockchain for commerce is the next evolution,” said founder and CEO Vaideeswaran Sethuraman. “Take the case of invoice sharing. For most businesses, it is a very sensitive document [details of what they are ordering, and how much, could be a boon for rivals]. Ninety per cent of the invoices are processed manually, and they do not want it shared across a public network. We allow it to be shared electronically, from system-to-system, thus eliminating the need for manual processing. Think of how much resources can be saved,” he said.

Jayesh Ranjan, IT secretary to the Telangana government, said the state was already preparing government officials to handle the technology. “In every department where the blockchain pilot has been introduced, the department is expected to nominate an employee who will take over from the vendor. The vendor will not be involved forever. The vendor will only implement, show the result and move on,” he said.

But, how do the provisions in the Garg committee report stack up against the government’s ambitions? According to industry insiders, the report makes a fundamental error with the misleading binary of useful blockchains and evil cryptocurrencies. Non-official virtual currencies, the report states, can be used for defrauding customers, money laundering and funding terrorist activities. This is exactly why everyone is calling for regulation, say experts. A ban would only be counterproductive. “It is like saying internet is allowed, but websites are banned,” tweeted Nischal Shetty, CEO of the Mumbai-based crypto exchange WazirX.

“Many of the major innovations will happen on public blockchains,” said Nitin Sharma, venture investor and founder of Incrypt Blockchain. “A public blockchain functions without a centralised entity because the nodes [users] maintain the system and crypto-tokens are the incentives [economic or otherwise] for the system to reward participants and weed out bad actors. Why not let Indian tech startups experiment and participate in such a revolutionary global innovation?” A complete ban also preempts any chance for Indian companies to make use of Initial Coin Offerings (ICOs)—the cryptocurrency’s answer to an IPO, where you raise funds in exchange for crypto-tokens.

According to a 2019 NASSCOM blockchain report, India only received $8.5 million in investments through VCs and ICOs in blockchain industry. According to Incrypt’s report, total investments in the blockchain ecosystem in India accounted for less than 0.2 per cent of the global total. “Uncertain policy and regulatory environments are reasons for this,” the report noted.

India needs legislative clarity. According to an April 2018 RBI circular, banks are not allowed to associate with crypto-entities. This has resulted in cryptocurrency exchanges like ZebPay shutting shop in India. The remaining exchanges had to improvise to deal with the situation. “Now, we connect a buyer to a seller and vice versa in a trade,” said WazirX’s Shetty. “WazirX acts as an escrow account which holds the cryptos during the transaction so that neither party cheats the other. This way, we do not have to be involved with the banks.”

The Garg committee report raises some legitimate issues that need ironing out. The problem of scalability of blockchains has always existed. A thousand users in a system will work fine; if it comes to a million or more, performance and speed will be majorly affected. The bitcoin, for instance, can process only four transactions per second; in comparison, VISA can go over 4,000. For India, home to almost a sixth of the world’s population, is it economically viable to invest in such a huge quantum of computing power? “Think of how much the government has invested in manpower to manage these activities,” said Karthik Mandaville, founder of SpringRole, which positions itself as a blockchain competitor to LinkedIn. “Computational investment, once you remove all that, will not be that high of a financial burden.”

Then, there is the crippling consumption of energy, which was cited as one of the reasons China banned cryptocurrency mining in 2017. The Iceland government said in 2018 that energy consumption from bitcoin mining centres exceeded that of homes put together. India’s larger policy incongruities are also worth probing. How can a policy of muscular promotion of Aadhaar, a centralised identity system, coexist with a policy to stimulate decentralisation? “It is possible to use Aadhaar as the identity layer, and still have blockchain solutions running on the side. There are hybrids possible.” said Sharma, who has associated with NITI Aayog in this sector. “The technology today is not mature or ready for mass use in any way. But, what we do need to keep in mind is that there is a new ‘internet’ being created—the Web 3.0. Over the next five to ten years, it will mature into something very big,” he said.

With Sravani Sarkar and Rahul Devulapalli. 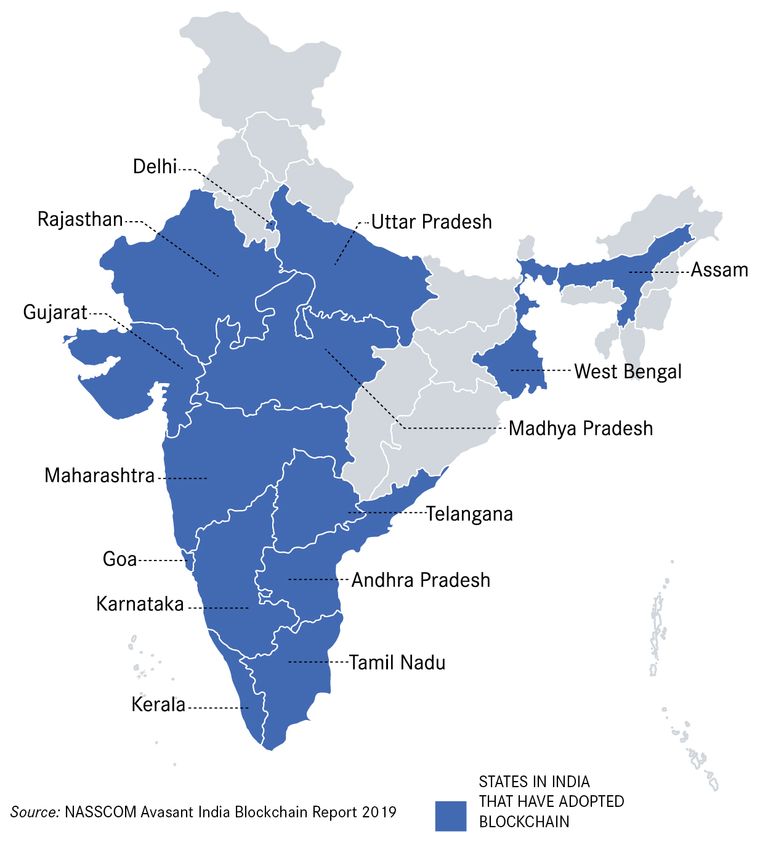