How Mindtree acquisition will benefit L&T 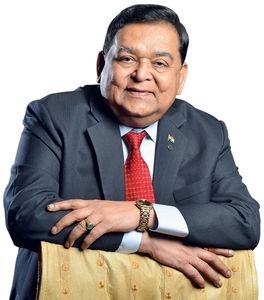 IT WAS IN 1999, when India was going through the dotcom boom, that Ashok Soota quit as vice chairman of Wipro’s information technology services business and started a software services firm, Mindtree, along with eight friends. Coffee baron V.G. Siddhartha was among the first investors in the company. In the past two decades, Mindtree carved out a niche for itself in the IT outsourcing business. Siddhartha remained invested in the company all along, but earlier this year he decided to sell his 20.32 per cent stake to Larsen and Toubro, in an attempt to cut down his debt.

Mindtree’s promoters were not amused, and were vocal against L&T’s takeover attempts. They did not see any strategic advantage in the transaction and considered it a “grave threat” to the organisation. But on March 19, L&T entered into a definitive agreement with Siddhartha and related entities of Coffee Day Trading and Coffee Day Enterprises to acquire the stake. It also announced an open offer to minority shareholders to purchase an additional 31 per cent stake at 0980 a share, and said it would also look to mop up another 15 per cent through open market transactions.

S.N. Subrahmanyan, chief executive and managing director of L&T, insisted that it was Siddhartha who approached the company to sell his stake. India’s largest engineering and construction company, L&T already has a strong IT services and technology business—L&T Infotech (LTI), which offers software services, and L&T Technology Services, which offers engineering and R&D services. The combined revenues of the two companies were in excess of Rs14,500 crore last year. Mindtree reported a revenue of Rs7,022 crore and a net profit of Rs754 crore in 2018-19.

So, why was L&T keen on taking over a mid-size IT firm?

The group’s core business—large infrastructure projects such as airports, bridges and power plants—generates profit after tax (PAT) of around 7 per cent, according to Subrahmanyan. It wants to derive higher profits from the services business, which is also less risky. “Over the last few years, we have been giving more fillip and push to services business. These businesses are more profitable and we are able to see PAT of 15-16 per cent. From an overall portfolio point of view, it makes sense to grow the business faster,” said Subrahmanyan. 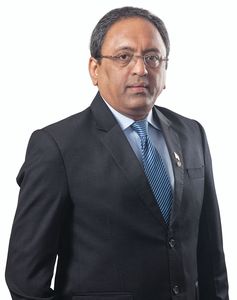 And, Mindtree was a perfect fit. It was one of the earlier companies to sense and seize the opportunities in new digital technologies like artificial intelligence, automation and machine learning. In the January-March 2019 quarter, digital technologies accounted for 49 per cent of the company’s revenue. In the case of Tata Consultancy Services, India’s largest IT company, digital contributed just 32.2 per cent of the revenues in the same quarter.

L&T itself has been a big user of new technology tools in engineering, construction and other businesses. Riding on these strengths, the company has launched a new technology platform called L&T-Nxt, which targets building a business through the use of new-age technologies. “We believe there is a huge opportunity ahead with an increasing number of companies moving towards Industry 4.0 (fourth industrial revolution) and adopting smart products, systems and processes to unlock incremental value,” said L&T chairman A.M. Naik. “While it is too early to talk about financials, L&T-Nxt is well positioned to capture a significant market share and become one of the key drivers for L&T’s growth in the long term.”

There are other synergies across services verticals. For instance, L&T Infotech has a strong presence in banking, financial services and insurance verticals, which contributed 47 per cent of its revenue and is followed by manufacturing (15.9 per cent). On the other hand, at Mindtree, it is hi-tech and media (39.6 per cent), and retail and consumer packaged goods that were the strong contributors. “They operate in vastly different areas, with a minimum client overlap,” said Subrahmanyan. 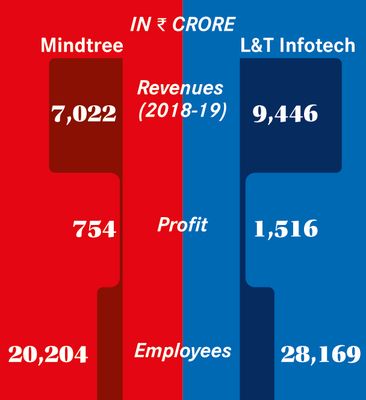 Analysts say the acquisition will help L&T add several large clients to its IT services portfolio. “Over the next 1-2 years, the acquisition of Mindtree would add significant scale, plug the gaps in LTI’s portfolio and add new large clients (Hermes, The Carlyle Group and Microsoft) and enhance the digital capabilities and presence in infrastructure management space and cloud within the L&T group,” said a report by broking firm Sharekhan.

For now, though, L&T plans to run Mindtree as a separate entity, said Subrahmanyan. Analysts wonder if it would remain so in the long term. “Mindtree and LTI businesses are highly complementary,” said Kawaljeet Saluja, analyst at Kotak Institutional Equities. “Mindtree has a broad range of offerings, is strong in digital, particularly in the experience layer and cloud services, and excels in handling the discretionary spending of clients. LTI’s strengths are geared towards core transformation, enterprise solutions and strength in multiple aspects of digital including cloud, analytics, internet of things, cognitive and mobility.”

Finding new leaders and a plan of action to retain existing managers at Mindtree will be a critical focus area for the L&T management. There is speculation that attrition at Mindtree will spike after the promoters’ exit. Addressing this, along with integrating Mindtree’s existing workforce and convincing key clients to stay will be crucial for L&T.