How premium bikes have beat the sluggish economy

Harder, better, faster, stronger. Nope, we are not sampling Kanye West’s hit pop auto-tune. It just about encapsulates the yearnings of young bike lovers in India. They want more power and better performance, and it has triggered a paradigm shift in India’s two-wheeler market, which is the largest in the world.

“There are two types of bike buyers in India,” said Ravinder Singh, senior vice president, Yamaha Motor India. “The innovators, the unconventional breed of riders who want something different, and then there are the ones who go with the crowd, who want a bike to commute. We have focussed on the innovators, and we have seen that every time we do something stylish and exciting, they accept it readily.”

And their numbers have crossed the tipping point. Last year, premium motorcycles (any bike priced over Rs1 lakh, or has an engine above 150cc) sales in India crossed the one million mark for the first time. It is a segment that has been growing much faster than the overall two-wheeler market. For instance, while total bike sales in the country last year grew by just 4.8 per cent, premium bike sales soared by 20 per cent. “The premium segment is definitely poised to grow in the next two to three years,” said Rajeev Singh, partner and automotive leader at the consultancy firm Deloitte.

Interestingly, this growth comes even as the automobile industry bears the brunt of the overall slowdown of the economy, with a decline in sales across all categories. But in the premium bikes category, new launches and the models that got good word-of-mouth publicity performed exceedingly well. In the 500cc-plus segment, for instance, sales went up almost ten times, primarily due to Royal Enfield’s new Continental GT models. In the 800cc-plus range, the CBR series from Honda sold well, while Triumph and Harley-Davidson models held their ground.

It is this kind of robust growth that makes the likes of Royal Enfield honcho Siddhartha Lal exult that “if the Indian commuter market targets a growth of 6 per cent, then we will target 12 per cent”. Interestingly, it is a sentiment even the mainstream commuter bike brands share. Marcus Braunsperger, tech head of India’s biggest bike maker, Hero MotoCorp, had famously declared at the Auto Expo last year that this would be the “year of the premium”. A striking statement, considering that Hero has forever been the poster boy of the no-frills, high-mileage commuter bike segment. But then Hero did decent numbers on two premium bikes last year, the Xtreme 200R and the Karizma, when the sales of its bikes in some of the lower segments had slipped. In the crucial 110-125cc segment, its sales fell; in the 75cc to 110cc category, the growth percentage was meagre. 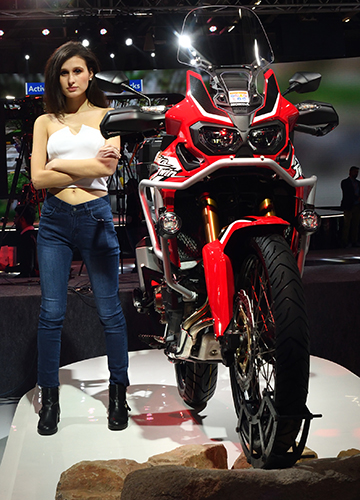 In April, Honda—whose big bike portfolio includes the CBR series (including Fireblade), the Africa Twin Adventure Tourer and the GL1800—launched Honda BigWing, exclusive showrooms catering to its premium bike models. “Earlier this year, we made a commitment of expanding our premium motorcycle business in India,” said Minoru Kato, president and CEO of Honda Motorcycle & Scooter India.

Other mainstream brands, too, have been focusing more on meaner bikes to shore up their profitability. “In the premium segment, we got more volumes than our projections,” said Ravinder Singh of Yamaha. Another Japanese player, Suzuki, has even decided to get out of the commuter segment to focus on premium bikes.

Among Indian players, Chennai-based TVS, whose core strength historically has been in mopeds and small bikes, has transformed itself. It is the leader in the entry-level premium bike segment (150-200cc) with its runaway hit, the Apache, which sold 4.64 lakh units in FY2019. TVS now has a partnership with BMW.

Bajaj also is shifting its gears aiming not just at the fast expanding domestic market, but also the lucrative export market. About half of its bikes manufactured in India are exported. This includes those from the stables of KTM (Austria) and Kawasaki (Japan), which are manufactured by Bajaj. This list will soon feature Sweden’s Husqvarna and the UK’s Triumph. Bajaj is reported to be working on more powerful variants of its Pulsar, Dominar and Avenger.

This spike in the popularity of premium bikes even as the mainstream commuter bikes sales get sluggish points to an evolving market and social trends. “The demand for high-end bikes is increasing on the back of higher purchasing power, aspiration for luxury brands and evolving lifestyles,” said Rajeev Singh of Deloitte. “Besides, biking is emerging as a hobby among millennials. This trend is attracting new players to start local manufacturing, while customers buying these products remain unaffected with macro-economic conditions.”

And these buyers are not swayed by the cost of the bike or rising fuel prices. “When your purchase is more dictated by passion, your thirst for a particular kind of lifestyle, then that surmounts all economic considerations,” said Sugato Sen, deputy director general of SIAM, pointing to the many bike clubs that have sprung up around premium bike brands like Harley-Davidson and Royal Enfield, and the brisk sale in accessories.

While mainstream brands are pushing their way into premium segments, the traditional power performers are not overtly perturbed. Instead, they are widening their horizon. Enfield’s sales shot through the roof last year when it launched two 650cc bikes. The iconic Czech brand Jawa re-entered the Indian market after some five decades in October last year, and was swarmed with inquiries and bookings.

The international brands, too, are gung-ho. Triumph and Ducati plan to scale up by adding a pre-owned channel by August, and Benelli, MV Augusta and UM Motorcycles are keen on local manufacturing.

Harley-Davidson India managing director Sajeev Rajasekaran sounded supremely confident recently when he spoke in an interview about how the presence of more models and improving roads would “trigger further growth in the market”. So much so that Harley-Davidson is said to have second thoughts about its plan to create smaller bikes for the Indian market. The force is certainly with the big boys on the road right now.