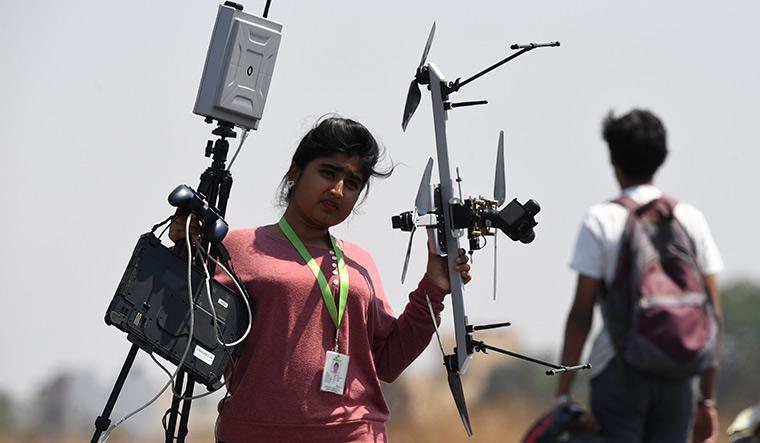 In the Hindi movie, Uri: The Surgical Strike, Paresh Rawal, who plays a character resembling National Security Adviser Ajit Doval, asks the DRDO for a drone that can fly close to the border undetected. After being told that there was none, Rawal spots an intern in a lab, fiddling with a drone that can fly like an eagle. It plays a critical role in the movie's climax scene.

While Uri turned out to be a big hit, drones are yet to take off in a big way in India. The new drone policy, notified in January, has been stuck in bureaucratic red tape. Drone manufacturers and drone-based service providers are facing newer problems. Under the new policy, for instance, manufacturers need to use a single-window online platform called Digital Sky, run by the directorate general of civil aviation (DGCA), to register their drones and obtain permission to operate them. But the platform is marred by glitches.

"A drop-down list with the names of drone manufacturers is left blank. And, there is no option to type in the name of the manufacturer, without which the registration process does not progress," said Sai Pattabiram, director of the Chennai-based Sree Sai Aerotech Innovations (SSAI) Ltd, manufacturer of one of the most recognised drone brands in the country. "As a result, till date, no one has been able to register on Digital Sky," he said.

The Narendra Modi government had banned the use of drones in October 2014. By then, however, there were more than five lakh drones in use, in fields as diverse as surveying, laying power and telecommunication cables, mapping large areas, crop protection and aerial photography. Nearly all the drones came from China, and all those were illegal.

Flying a drone without proper permission could attract fines and imprisonment up to six months. Yet, between October 2014 and August 2018, when the drone policy called “Drone Regulations 1.0” was cleared by the Union cabinet, not a single drone pilot was arrested. “This reflects the half-hearted attitude of the government,” said Vipul Singh, co-founder of Aarav Unmanned Systems, a Bengaluru-based drone manufacturing and services startup.

AUS is worried that the company's innovation and business model are under threat as the government drags its feet on the issue. “Earlier, our clients would get the required permissions from local and district authorities. But, with the new regulations in place, taking permission has become more difficult,” said Vipul.

For drone manufacturers who want to sell in India, the DGCA has listed requirements including software identification of drones, registered flight modules, 'no permission, no takeoff' (NPNT) system and flight logs. The regulator is, however, struggling with framing a system to check the hardware and software capabilities of drones, as well as facilities to test and certify them for airworthiness. Vipul and other drone manufacturers have been holding frequent meetings with the DGCA to tide over the crisis. “But things are just not moving,” said the 26-year-old entrepreneur. The DGCA is now looking at drafting “Drone Regulations 2.0”.

“We are going to allow drones to fly beyond the visual flying range, carry up to a certain limit as payload, permit autonomous flying and allow high-speed rotors in drones,” said Pradeep Singh Kharola, secretary, civil aviation ministry. The current policy allows flights only up to 400ft, or visual range of flight, which is not sufficient for carrying out most commercial activities.

But the industry seems sceptical. “The government should not push for a new policy without being able to implement the first one,” said Vipul. It wants the government to set up proper testing labs and spell out specifications for dealing with rogue drones.

The DGCA continues to view drones as a safety threat for aircraft and airports, although the government has legalised their use. “They are still a security threat and very much in the regulatory grey zone. There are issues with drones, leading to the closure of airports in many places,” said a DGCA official. He said on the issue of drones, there is a policy vacuum even among global regulators like the International Civil Aviation Organisation. “If you look at it that way, then we are not much behind other countries,” he said.

Drone manufacturers does not want traditional civil aviation rules to be applicable for them. “Drones are like motorcycles. There could be hundreds of manufacturers for them and there can even be self-assembled drones,” said Pattabiram. “The policy for drones has to be different,” he said.

The government had promised a separate regulatory body for drones working with or under the DGCA. Pattabiram said that promise should be honoured at the earliest before drones are turned into a serious air safety issue. “At present, there are about 40 million drones in the world alongside 30,000 to 40,000 aircraft. That is 700 drones per aircraft. This is going to double in the next four years,” he said. Pattabiram’s company has asked the civil aviation ministry to consider GPS-based tracking of drones.

Another concern is regarding the NPNT requirement for drones operating in India. The present policy makes it mandatory for drones operating in India, but so far only a few manufacturers have been able to accommodate the technology. “Being compliant was not an easy task. But we are happy that it distinguishes us from the Chinese drones,” said Nihar Vartak, cofounder of Bengaluru-based Asteria Aerospace, which supplies drones to the Army and the Navy. “All that is needed now is a proper regulatory environment,” he said.

With the frequency of drone sightings by aircraft on the rise, drone manufacturers want the government to wake up and act quickly. Drone companies have already started limiting their spend on R&D. Companies like SSAI have started branching out to new areas. Investors, too, have adopted a wait and watch policy. “Drone companies had received good funding after a policy was announced,” said Vipul. “Now, investors worry whether we will turn into non-performing assets.”