Troubles in debt market seem to have reached investors

The troubles in the debt market seem to have reached investors 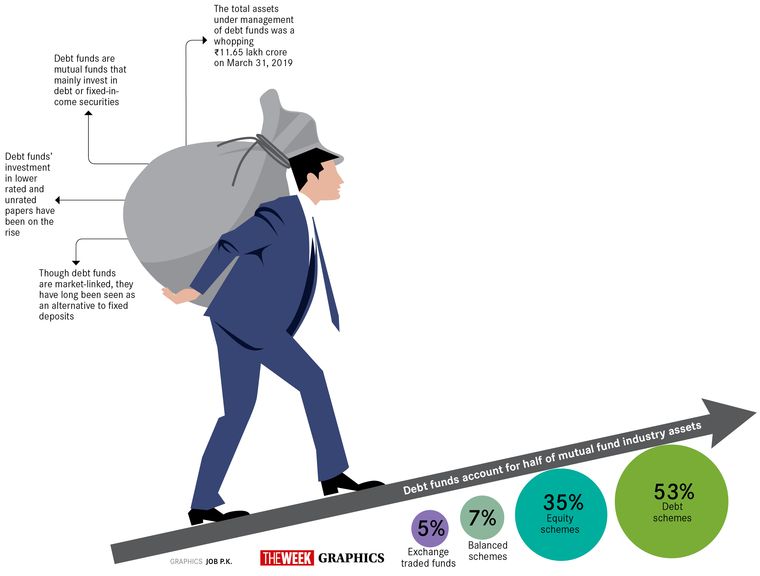 ON JANUARY 25, the shares of Essel Group’s Zee Entertainment crashed 31 per cent. Shares of its group company Dish TV also fell sharply. Though the shares recouped some of the losses after Essel Group’s promoter Subhash Chandra wrote to investors assuring that the best of efforts were being made to sell his stake in Zee Entertainment Enterprises and pay back debt, fund managers and investors were a worried lot. Debt funds had an exposure of around Rs 8,000 crore to Essel Group’s papers.

Because of the resulting delay in recovering money that was invested in two Essel Group companies, some fixed maturity plans (FMPs) of Kotak Mahindra Mutual Fund might not be able to pay the entire redemption amount to investors. Six FMPs of Kotak had an exposure of Rs 359 crore to these companies. A few other fund houses, like HDFC Asset Management, also had several FMPs with exposure to Essel Group.

In the case of the Kotak FMPs, while the investors will get most of their money back, the holdings in Essel Group companies would be returned only after recovering the money from the firms. Other fund houses may follow a similar approach in paying back the investors.

The fund houses have the option of invoking the pledge and enforcing the security, but that does not assure full recovery of dues. “We, in the interest of our unit holders along with majority of lenders, chose the option of providing time till September 30, 2019, to the promoters of Essel Group to conclude the stake sale,” said Lakshmi Iyer, chief investment officer (debt) at Kotak Mutual Fund.

“What markets have been experiencing in recent times is the credit risk, wherein the debt securities of some of the companies were downgraded due to defaulting or delaying on their debt repayments because of their financial vulnerability and asset liability mismatches,” said Kaustubh Belapurkar, director of fund research at Morningstar India. “The direct impact of these events is on debt mutual funds which have invested in the securities issued by these stressed entities.”

In the backdrop of recent scares at DHFL and IL&FS, which have seen credit ratings downgrades, and volatile stock markets, fund houses have become extra careful. The total value of mutual funds shareholding in the companies that had pledged shares has come down from around Rs 1.78 lakh crore in March 2018 to around Rs 1.54 lakh crore in March 2019. “The fund managers will become cautious in the wake of the recent scare at some corporate houses. A fund manager will think if he wants to take the risk to earn the additional returns or make a safer bet,” said A. Balasubramanian, CEO of Aditya Birla Sun Life AMC, one of the largest fund houses in the country.

The Securities and Exchange Board of India has issued guidelines to make the NAVs of debt funds more realistic. To bring uniformity across the mutual fund industry on valuation of debt securities that are rated below investment grade, such securities should be valued only at the price to be provided by valuation agencies, said B.N. Sahoo, chief general manager of SEBI, on March 22.

Still, investors are concerned about the safety of their investments in debt funds and are worried that the fund houses were taking too much risk. Debt funds have long been seen as an alternative to fixed deposits, despite the fact that they are market-linked and could give low or negative returns. Balasubramanian said typically only the credit risk funds invest a large part of their corpus in AA or below rated securities and problems emerge only when equity markets are volatile. “We have seen the downgrade cycles repeating every five years. We saw it post 2008, in 2013 and now, and that is when investors start worrying. However, there is no need to panic,” he said.

The onus, however, is on the fund houses. While the credit rating agencies, too, have come under the scanner in recent times on ratings given to securities, it is ultimately the fund manager’s responsibility to assess the risk properly, said Radhika Gupta, CEO of Edelweiss Asset Management. “The onus is on the asset manager to design the right product and to structure the right product and to do the right amount of credit research.”

The total assets under management of debt funds was about Rs 11.65 lakh crore as on March 31, 2019. “The debt fund industry combined is probably the size of the fifth biggest bank in the country,” said Gupta. “To expect it not to have non-performing assets is a little farfetched.”

Some experts are of the opinion that debt funds have not been highlighting the risk they have been taking. Investment adviser Morningstar said it would be prudent for asset managers to take a relook at how ‘loan against shares’ transactions are structured, especially by placing covenants around how much a promoter can pledge. “Otherwise, in cases of over-pledged promoters, such collateral remains as paper collateral which cannot be enforced effectively when required,” it said.

Fund managers and personal finance managers agree that investors need to be better educated on debt funds and the underlying risks and advantages. However, there is no reason for retail investors to get out of these funds in the wake of the recent incidents. Most funds have well diversified portfolios and a large part of them (around 80 per cent) is in high-rated securities. Also, most funds have adequate cover against the debt papers, said Vidya Bala, head of research at FundsIndia.com. So, even if some of the investments are in risky assets, investors’ money will largely remain protected.