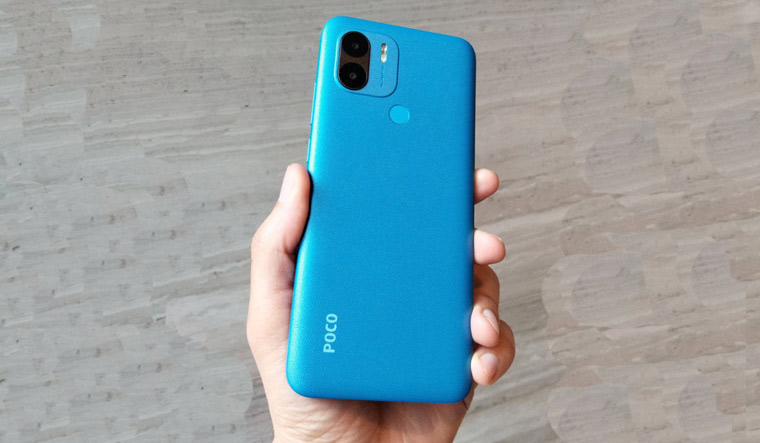 Poco has been one of the budget smartphones brands that has made a decent mark for itself in low to mid-range space in the past 3 years or so. The company doesn’t bring too many devices across various price points like several of its competitors, with the c50 being company’s latest budget offering. The phone comes in 2GB and 3GB RAM options, and the latter is the one I tried. Priced at Rs. 7,299 (launch price of Rs. 6,999), let’s see if the device delivers enough for that.

Design: The Poco C50 sports a 6.52-inch LCD display with a drop-notch for the front-facing camera. The bezels around the display are somewhat thick, though the bottom bar is significantly larger than the other sides. The ear-speaker grille is near the front camera, and it can collect dust, requiring you to blow it off or clean it every now and then. The phone is made of all plastic, including the back, bu the back has a little more interesting leather-like textured design and feel to it, making it somewhat stand apart from quite a lot of other phones at this price point. On the top you have the loudspeaker, while the bottom houses the primary mic, microUSB 2.0 port and 3.5mm audio jack. The left side only has the Sim card tray; and the right side locates the volume buttons and Power/lock key; might be nit-picking here but the keys don’t feel that nice to press and maybe one of the things the company tried cutting cost on (howsoever little it might be). The phone doesn’t creek or show any signs of loose ends or easily damageable body parts throughout my usage. It weighs a little above 190grams, and doesn’t catch smudges and fingerprints too quickly, plus it is not slippery at all.

Display: Sporting a 6.52-inch IPS LCD HD+ (1600x720) display. The display gets decently bright so that you would have to crank up the brightness to full to use it outdoors under direct sunlight. The display does an okay job of of handling HD videos, whether it’s YouTube or something else. One thing noticeable, though, is colours at times can look somewhat washed. The display might be having a bit of yellow-ish tint to it and it can also make content appear less accurate, in both images and videos. But for reading text and Webpages, there isn’t much wrong to pinpoint here.

Performance and experience: The phone runs on Android 12 Go edition and sports a Mediatek A22 chipset (up to 2GHz quad core processor, IMG PowerVR GPU) along with 3GB LPDDR4X of RAM and 32GB of eMMC storage (with about 23GB of free storage out of the box), which is expandable up to 512Gb using a microSD card. The phone has the Go edition of Android that’s aimed at low-end devices with limited available resources, but some features such as dual apps, split screen apps, and many app icon option shortcuts would be missing. The phone can handle basic tasks such as calling, video calling, watching videos over YouTube, listening to music and switching between these apps without much trouble. But it can show its performance ceiling once you open many Webpages (maybe a few heavy ones) in the background and use messaging apps alongside. If put under more than 4-5 tasks, the phone can struggle to handle switching between apps and scrolling smoothly in that case, but if you have 2-3 tabs open in Chrome, messaging on WhatsApp every now and then, and might browse YouTube or Instagram in your day while checking also on Email, you should be fine most of the time. Also, if you are used to carrying a lot of content on your device (whether from messaging, streaming or downloading otherwise), it might be better to invest in a good microSD card to with this phone. Oh, and there’s call recording feature present here and the person on the other side doesn’t get notified.

Camera: The phone has a dual camera setup on the back—8MP (f/2.0) main camera and a 0.8MP (QVGA) secondary camera. The camera app can take its sweet time before you can start using it. There’s portrait and time lapse modes included. The photos taken from the main camera looks okay to say the least. It can take usable shots for social media posting when used under good lighting and if you’re staying still. A little more challenging environment, or while the subject is moving and you might struggle to capture a nice enough photo. The camera can also take 1080p videos at 30FPS. It’s not a great camera but it’s not too bad for the price tag, just that it needs to be a little quicker to open and take shots.

Battery life and other stuff: The phone boasts a 5,000 mAh battery unit that supports up to 10watt of charging speeds. You get a 10watt charger in the box along with a microUSB to type A cable and SIM card tray removal tool (no case or earphones included). The phone lasts a day with 10%-15% still remaining in the tank. It charges from 1% to full in about two hours using the bundled charger. Among physical sensors in place, there’s no ambient light sensor (adaptive brightness works through the front camera), barometer or gyroscope. WiFi and Bluetooth work as expected without any glitches to report. GPS also works fine, though your location lock-in can take a few extra seconds than expected. The fingerprint scanner on the back does a fine job of working reliably and frequently enough for unlocking the phone, nothing to complain there.

Verdict: Poco’s C50 seems like a decent enough device to consider if messaging, calling, 4G connectivity and Emails is what you would mostly like to do along with some YouTube browsing. There are some compromises like in missing sensors, USB type C connectivity and maybe raw performance, but that’s not what it seems to be made for.