Satisfactory 5G performance, but could further improve on the OS experience 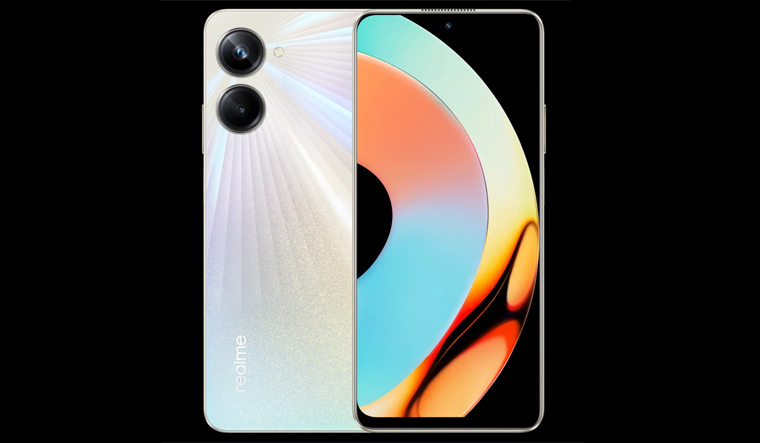 Smartphone maker Realme has been one of the better-performing companies in the Indian smartphone space for the past three years or so. The company is generally known for its value-formoney options, delivering Android smartphones at various price points. The realme 10 Pro is its new 5G handset that comes at a base price of Rs. 18,999. Does it deliver? Let’s try and find out.

Design: The 10 Pro 5G features a 6.72-inch LCD display on the front with thin bezels on the sides and top but slightly thicker at the bottom (chin). The phone weighs around 190grams with a thickness of about 8.11mm and has flat sides and a blocky design that a lot of folks might like. The back of the phone features a polycarbonate casing with matte finish. I found the device comfortable to hold and noticed nearly no fingerprints and smudges during the usage. The dual camera cutouts protrude from the back with no single rectangular housing as we often see on phones these days The left side features the dual SIM card tray (plus microSD card) near the top, while the right side has the volume buttons and Power/lock key near the middle. The keys feel don’t feel cheap and have enough travel requiring decent pressure to be pressed. The bottom houses the 3.5mm audio jack, primary mic, USB type C port and loudspeaker, while the top has the secondary mic. The main standout of the device is that nebula blue back with changing colours as per the light on it and the angle you’re holding it at. The ear-speaker grille at the top is a bit of an eyesore, but it’s not a deal breaker. So, design and build quality are definitely a strength of the phone here.

Display: The phone features a 6.72-inch (1080x2400) IPS LCD display with support for up to 120Hz refresh rate. The display is really bright and usable under direct sunlight without much hassle. It doesn’t support HDR but is decently sharp and has somewhat vibrant colours to watch videos and view images. The 120Hz refresh rate also helps in navigating UI and more so with games, of course. The punchole for the front camera on the screen isn’t too large either, so that also helps a little with watching your content.

Cameras: There’s an 108MP (f/1.75) camera (Samsung HM6 sensor) and a 2MP portrait camera on the back. The portrait camera isn’t much to write about, if you are into taking portrait shots regularly, you might want to look somewhere else. The main camera, though, is pretty good in most conditions. I found the camera to have less of a shutter lag than the 9 Pro+ but the camera quality isn’t much better. The photos looked detailed, decent contrast and white balance in conditions with good lights, whether outdoors or indoors. In low-light, the pictures are okay and not too great. They can have good colours but often came out grainy or too blurred out on the subject even if you’re not moving. There’s also RAW mode support if you want to tinker more with your shots later in the Street mode. The front-facing 16MP camera is a good performer for your selfie needs as it can take detailed, colour-rich shots, but I preferred no filter and retouch mode on it for a more realistic shot.

Performance and OS: The phone is equipped with a Snapdragon 695 chipset (2.2Ghz octa core processor, Adreno 619GPU), along with 8GB LPDDR4X of RAM and 128GB of UFS 2.2 storage. It runs on realme UI 4.0 based on Android 13 with the November security patch. The phone handles day to day tasks usually well enough. The 120Hz refresh rate comes in handy in games such as Asphalt 9 Legends, it handled them fine (very few frames dropped) at highest settings albeit the phone heated up a little after an hour or so. One thing where realme UI seems to have improved with 4.0 is less aggressive killing of apps and services in the background, apps resumed much quicker and from where they were left previously more frequently than what we have seen on realme phones before. But one thing where it could further improve is throwing ads and additional apps installation options to the user after installing an app or while setting up the phone. This happens frequently whenever you install a new app, and it does hamper the user experience to some extent. Most of the irrelevant ads and notifications can be disabled from Settings or during the initial setup. It supports 5G (NSA + SA) mode, and I found it latching on to 5G quite frequently on Jio (yet to be available on Vi), but every now and then, even sitting at the same spot, it goes to 4G LTE. On 5G, I got as high at 650mbps download speeds and 100mbps upload speeds with 30ms latency. The chipset is far from being the latest and greatest for this price segment, something realme could have given a bit more thought on, but it isn’t that outdated or low on power.

Battery life and other stuff: The phone boasts a 5,000 mAh battery unit and comes with a 33watt charger in the box (with a USB type C to A cable). The phone lasted a full day more often than not – with brightness set at 30%, two Email Accounts, a lot of music playback, an hour of videos, WiFi connected for about 12 hours, 5G + hotspot for nearly 5 hours. The phone charges from 1% to full in nearly 100 minutes or so using the bundled charger. The WiFi and Bluetooth connectivity (supports aptX) was pretty much on point and didn’t show any trouble. Dual stereo loudspeakers are quite loud and punchy and provide a good enough experience of multimedia, not distorting unless played on highest volume for some mid to high pitch stuff. The call quality, including with 5G on, is really top notch, something a 5G handset can at times struggle with. The fingerprint scanner on top of the Power/lock key, though is at an unusual place, is quick and reliable for frequent use that I didn’t really miss it placed on the front side.

Verdict: The realme 10 pro 5G is an all-round budget Android smartphone that provides a satisfactory 5G performance (when available), a great battery life, an improved software experience that certainly has room to improve further, and that gets its basics correct. The phone is in a very competitive price segment, and if you want your phone’s main rear camera and front-facing camera to be more than good enough, then you can consider this device, otherwise you might have to look somewhere else with a lot of 5G devices on shelf these days.