A80K meets expectations and performance measures on most counts 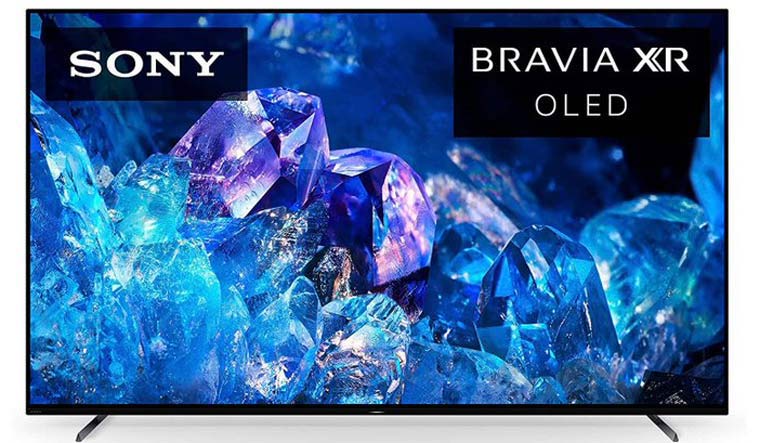 Sony’s Bravia XR-55A80K is the company’s latest mid to high-range OLED TV that currently sells for about Rs. 1,80,000. The TV shows Sony’s efforts in the Indian TV market,which has seen a lot of players in the entry-level, while the mid-range space shows more and more OLED options for the customer. Let’s try and see what this Sony Bravia TV gets right.

Design: The build quality and design aesthetics of the TV are pretty much line with what we have come to expect from a Sony TV in this day and age. The TV weighs about 18kg and comes with a metallic leg one near each corner and doesn’t wobble one bit. The back of the TV is all plastic though the quality of this plastic used can be instantly seen to be better and more assuring to use than what we have been seeing on budget smart TVs in the last 3 years or so. The back also features all your ports inlcuidng HDMI 2.1 and the port section can be covered with a removable lid. The bezels around the display in the front are quite thin, giving the TV a nice touch up. The remote control is pretty tall, slim and is made out of plastic, too, with dedicated buttons for apps such as YouTube, Netflix, YouTube Music and Prime Video. Other notable buttons include Google Voice, source input, settings and Home.

Display quality: The Bravia A80K features a 54.6-inch OLED display with a 3840x2160 resolution and variable refresh rate up to 120Hz. The display on the A80K handles HDR and Dolby Vision better than probably any smart TV under Rs. 1,50,000 today (when used in low-light rooms), maybe one of the few models that can give it a good race would be LG’s 55C2. The contrast and details in the output make the video look really good, whether it’s in the Apple TV app or something over Plex, you wouldn’t be disappointed with how it handles HDR and DV videos. The TV has rich and deep black levels with good contrast levels with Sony’s Cognitive processor XR in place. Its brightness level could have been a little higher, but it isn’t too bad to make it a deal breaker.

Performance: The TV runs on Android TV 10 based Google TV, its menu navigation and app opening and closing experience is nothing to worry about. A lot of times, we have seen manufacturers cut down on the processing bandwidth that can hinder a smooth UI navigation and app switching but this didn’t seem to be the case here. Also, you can use your Android phone to cast videos or photos from an Android phone as you would expect, plus, beam media from an iPhone or iPad as the TV supports AirPlay 2 (HomeKit is also present for controlling your smart devices). Viewing photos and videos over either of these two is smooth and glitch-free. Other than that, the TV has the horsepower for higher refresh rate gaming, so you can connect your consoles like PS5 and Xbox X (2HDMI ports support ideal variable refresh rate and tone mapping). There’s only one USB 3.0 port (other one being USB 2.0), though it should have had at least one more of that in place; there’s also no audio analogue output on the A80K.

Other features: The TV comes pre-installed with the Bravia Core app, which is Sony’s own exclusive ap for the XR series. You can stream a lot of old movies, including IMAX releases, on the app for free, and you get 5 credits to stream some selected recent releases on the app for free. The user gets this service for a year, but there’s no official word from Sony about its pricing for later on. The app streams in 4K Dolby Vision and Dolby Atmos at about 80mbps bitrate, which I am not sure any other streaming service does today. It’s definitely worth surfing through to watch IMAX releases, especially so if your Internet connection is fast and stable enough.

What’s okay: I found the audio output on the TV to be a bit of a mixed bag. At times, the audio quality is sufficient to handle live sports, but other times it struggles a little with the commentary, making the audi sound mushy. It isn’t bad but for movies and TV series, your experience would obviously depend on the source. Its acoustic audio experience can be decent for movies and even games, but you’re still better off with a dedicated set of speakers for your TV experience, especially so for room large enough.

Verdict: The A80K meets expectations and performance measures on most counts. It isn’t a low-ned priced TV, but it seems to be aimed priced for somebody looking to buy their first big OLED TV. A lot of deals have been floating around for smart TVs these days, and Sony themselves three-year warranty for this TV if you buy one this month (instead ot the usual two years). If you care about having a nice contrast-y 4K picture quality with more than decent HDR support, smooth performance and decent build quality, the A80K is one of the contenders in the market today.