'Gold, Oil and Avocados' review: A deep dive into neoextractivism in Latin America 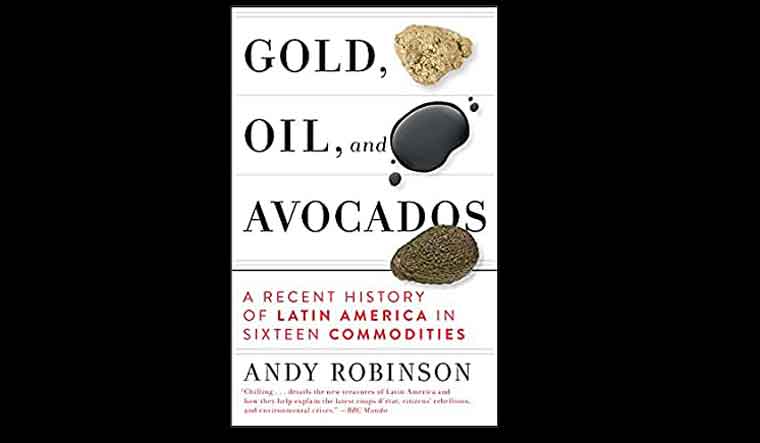 Gold, Oil and Avocados: A Recent history of Latin America in Sixteen Commodities—this is the title of a book by Andy Robinson, published in August 2021. Robinson is a fan of the Uruguayan writer Eduardo Galeano who wrote Open veins of Latin America, a legendary book (published in 1971) which was a bible for the Latin American leftists and nationalists.

Galeano wrote about how the export of Latin America’s natural resources generated wealth for Europe and US while exacerbating poverty for Latin Americans. One of his famous quotes was, “We Latin Americans are poor because the ground on which we tread is rich.” Galeano had given illustrations to the Dependency Theory of Latin American development economists which was about the flow of resources from the periphery of poor and underdeveloped countries going to enrich the core of wealthy nations at the expense of the former.

Robinson is an ardent fan of Galeano. He says, “I felt inspired once again, as I had been in my youth, by the young Galeano’s desire to write about political economy in the style of a novel about love or pirates”.

In this book, Robinson has written about the contemporary “Neoextractivism” practiced even by the Pink Tide governments of the twenty-first century besides the multinational corporations and their local counterparts. After all, the success of the pink tide governments was partly due to the high international prices and demand (especially from China) for Latin American commodities. Robinson says, “ I witnessed fierce debates between those appalled by the pink-tide governments’ embrace of “neoextractivism” and those who dismissed the anti-extractivists as romantic.

Robinson’s choice of the sixteen commodities are: gold, diamond, silver, copper, lithium, niobium, iron, coltan, beef, oil, soy, avocado, potatoes, banana, quinoa and hydropower. He has travelled extensively in the remote areas of mining, cattle ranches, plantations and indigenous areas. He has undertaken arduous and courageous journeys through the Amazon forests, Atacama desert and dangerous territories controlled by drug cartels and illegal mining mafias. He has revisited some of Galeano’s iconic destinations of colonial plunder and pillage such as Potosí, Minas Gerais, and Zacatecas. Robinson has met local activists, farmers and miners and given a graphic image of the situation on the ground. So his impressions, analysis and comments are valuable to understand the issues at both micro and macro levels.

He has brought out the links between the extractive interests and the coups, protests, assassinations and overthrow of democratic governments by the US. He has given examples of the American regime change operation in Brazil for iron ore, Chile for copper, Guatemala for bananas and the attempts to overthrow the government in Venezuela for oil. He has pointed out the hypocrisy of Canadians who pose as one of the global champions of sustainable development while their mining companies exploit the gold and other resources of Latin America unscrupulously with the least concern for environment or for local inhabitants.

Robinson has juxtaposed the miserable conditions of the places of extraction with the end use of those raw materials in a world of conspicuous consumption and excesses. The diamonds extracted by the Brazilian garimpeiros in an inferno of mud and violence, processed in Surat, India, and bought in swanky Swarovski stores in Dubai. The prototypes of hypersonic missiles assembled in California or Shenzhen with the niobium extracted in the primitive areas of amazon. The conversion of potato, the sustenance to the great pre-Columbian civilizations in the Andean highlands, into addictive potato chips of Frito-Lay (PepsiCo), and its contribution to an epidemic of obesity in Latin America. Mexico and Central America, with the highest obesity rates in the world, are the worst hit by the cross-border invasion of salty and crispy snacks. A global fashion of guacamole that has turned the Mexican region of Michoacan, cradle of the Purepecha Empire, a more complex society than the Aztec’s, into a monoculture of avocado run by organized crime.

Robinson has brought out the dilemma which confronts the region and its second Pink Tide: how to generate equitable growth and reduce poverty and inequality while avoiding the curse of dependence on export of raw materials which affect the environment. He calls for a new development model in Latin America with a radical change of philosophy, beyond the simple extraction of raw materials. But it is a tough call and a long road for some of the Latin American countries to get over the easy and short term gain from extraction and export of raw materials. This is evident from the case of Bolivia which has one of the largest reserves of lithium but unable to get it off the ground since the government has stuck to its policy of not allowing export of raw lithium and insistence that factories should be set up in the country to produce batteries.

The multinational companies, who have the bargaining strength with their capital and technology have avoided entry into Bolivian lithium sector and focused on other business-friendly countries with lithium such as Chile, Australia and Argentina. Bolivia’s large iron ore deposit in El Mutun is stuck in the ground for the same reason. The Bolivian government’s condition that the iron should be used to make steel within the country is not acceptable to the companies. So the Latin American governments need to be realistic and pragmatic in their policies of ‘resource nationalism’.