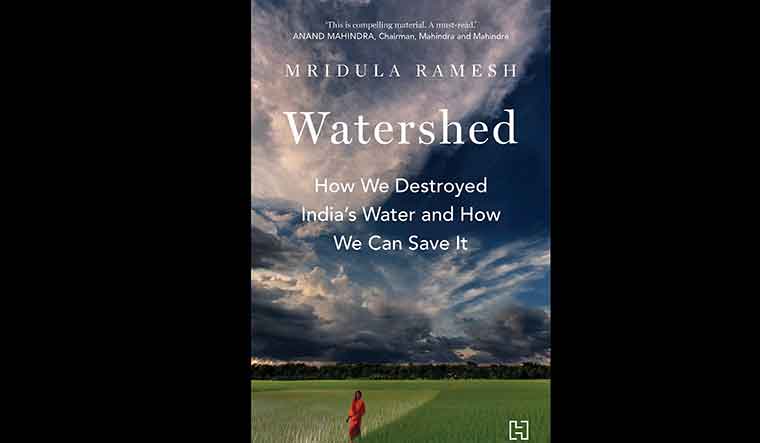 It is often said that if climate change is a shark, water is its teeth. Mridula Ramesh's book, Watershed, delves deeply into India's relationship with water, be it with its many rivers or its unique monsoon system. She discusses how the people who valued water, and had so many to means to store and conserve it, are today in a situation of water stress.

The book may sound like reference material for research, but it is actually many books rolled into one. It is a travelogue, as it takes the reader from the deserts of Rajasthan to the wettest spot on earth, Meghalaya. It is a historical read as it jumps from one millennium to another. At one point, Ramesh has taken us back in time to the Indus Valley Civilisation; at another, we join her in unravelling the various layers of Delhi's history, till we finally discover Anangtal Baoli, supposed to be Delhi's oldest step well. The Baoli in Meherauli Archaeological Park is obscured by a “battlefield of garbage”, a telling image of how India's relationship with water has changed from reverence and respect to shabby disregard and insult.

Ramesh, founder of Sundaram Climate Institute which focuses on water and water solutions and education, points towards the British colonising of India as the point in time when the country's relationship with water began changing. Deforestation, changing crop patterns, and a slew of “improved'' technologies introduced then continued, and worsened, post-independence leading to the present-day crisis when borewells have sucked out the last drop of moisture from the bottom of the water table and when piped water in the national capital reeks of ammonia. She writes how an Indian's personal relationship with water is telling about the individual's economic status. She writes: For the rich, water is peripheral. In the middle sections of society, water becomes important during summer or during a drought. For the poor, life revolves around water. Will it come? When? How much?

The book is written in an interesting manner. Water, naturally, is not a dry subject. Ramesh, however, makes it dance in a myriad way to her narrative. Her chapters are replete with anecdotes, sometimes personal, often some nuggets from history that are largely unknown. She writes about Partition, when Cyril Radcliffe came to cut up the country. As he looked at the Punjab, he suggested that perhaps the canals and fields they irrigated should be treated separately. Jinnah reportedly told him to get on with his job, he would rather have Pakistan deserts than fertile fields watered by courtesy of Hindus. Nehru showed equal disdain, telling Radcliffe that what India did with India's rivers was India's business.

The result was two countries--one which has the headwaters of the main rivers that drained the land across the border. One country looked helplessly at the control the other had over its waters, the latter looked enviously at the green fields these waters were nurturing. The Indus Water Treaty was signed only in 1960. “Would India have agreed so readily to this sharing of waters if it had not needed to be in the World Bank's good books? Or Indians had not grown used to eating wheat rather than millets. If ever there was a lesson for living within one's water endowment and financial budget, this was it, she says. “But the deed was done..... neutering any hydrological discipling tool that India possessed.''