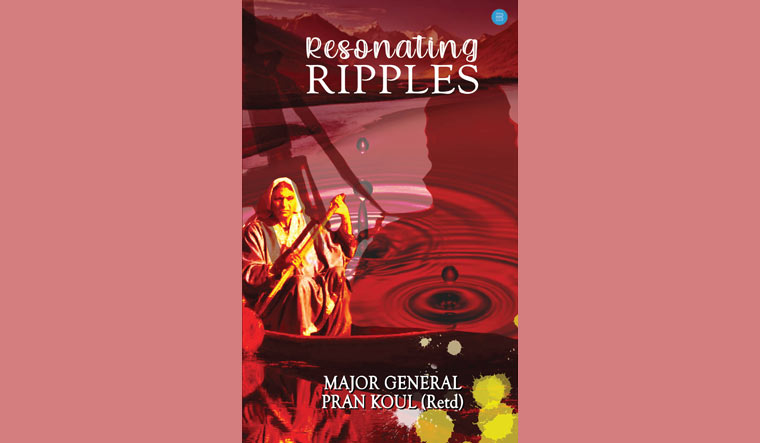 To enrich one's poetic craft, one has to extend themselves beyond the sole act of writing poetry. Major General Pran Koul's long and illustrious career serving the country has given him a large terrain of themes to dip into for his poems.

And his love for ghazals, shayari and the Urdu language has only nurtured the cadences of a righteous poet who can "set things right."

Early in his debut poetry collection, Resonating Ripples, General Koul quotes a New Thought minister called Micheal Bernard Beckwith: "Creation is always happening. Every time an individual has a thought, or a prolonged chronic way of thinking, they are in the creation process. Something is going to manifest out of these thoughts." So too with Koul's prolonged exposure to heart-rending stories from the land of his birth, Kashmir. Manifesting the stream of deeply churning events as poetic disclosures was inevitable.

The reality of exile always finds expression in literature and poetry, especially in the 20th century when the Indian subcontinent witnessed at least four major waves of forced migration. The mass exodus of Kashmiri Pandits in the late 1980s is one of them. In a deeply moving poem written ten years ago, titled "Murmur From The Heart of An Exile", Koul writes:

"Where has he hidden himself
after denuding the garden off his Bahar?
Where trees now emit sparks; gone is the charm of the soothing Chinar?"

There are poems on borders recalling and transcending the horrors of Partition. "In Who Laid the Barbed Wire", the birds mightily dismiss human follies with their soaring march across mad-made divisions.

Koul is credited with surveying the first Indian map in Antartica in 1991 and, fittingly, there's an ode to the "distant icy land" near the South Pole called Antarctica Warriors. The journey to get there from Goa aboard the mighty MS Thuleland is described in vivid detail.

"At length, the sun was seen once again
the sea wore the look of a bride.
Floating icebergs, like pearls, well spread all over, embellished its sparkling bare chest
Thus it put all fears to rest!"

Major General Pran Koul has previously authored "The Silence Speaks," a memoir which touches upon his journey from the quaint streets of Sopore in Kashmir to the corridors of GHQ, Rawalpindi, Pakistan. His historic official assignments have taken him to Antarctica, USA, Russia, China, Pakistan and Bhutan. His fruitful, rewarding professional life is mirrored in his poems in the way they adopt a tenor which is sensitive and wise. And always forward-looking. In spite of the mayhem and the bloodshed, there is no sense of fatalism or defeatist resignation.

In "She Didn't Sigh Nor Did She Cry" Koul recounts in poignant verse, the steely response of a young widow after her soldier-husband's body is flown home in a coffin.

"She stood frozen till she heard her daughter's creak
a knee-jerk reaction and she pulled herself up,
for, the child was scheduled for an exam in the school.
The brave heart sent the little one to face her greatest test, she made the coffin to rest,
until the daffodil returned from school."

In her beautiful poem, perhaps a love lyric, the poet negotiates a long, dark night to meet his beloved despite the many "bars" that need to be broken and the "scars" that need healing.

In Resonating Ripples, readers are also gifted with a bittersweet short story, "An Earthen Cup of Homemade Curd," which envelopes themes of friendship, community, love and loss in a heartbreaking display of how circumstances intervene to rip apart the purest of communions and turn the tables on the victor and the vanquished. But also how time heals and redeems, that some alliances forged in childhood will always be rocksteady. It's another expression of poetic justice.

Ultimately, this vibrant poetry collection is a testament to the resilience of the human spirit which always lets darkness guide oneself to the light. As Koul himself prefaces in a poem called "The Power of Night": When I get lost, it is the darkness that guides me by its unseen light.