All those lives that we do not experience are just tall tales to us,” wrote Benyamin in his famous novel Goat Days. After reading The Sickle, this would probably be the first thing that would come to your mind. That we live in a country of extreme inequalities; that our ruling class is not ready to see or believe the sufferings of the impoverished. Written by acclaimed Bengali writer Anita Agnihotri, The Sickle is a highly political novel that empathises with the unprivileged in this country. Agnihotri places the novel in the drylands of Marathwada. The novel starts with the plight of farmers forced to migrate from the drought-prone Marathwada and work for low wages in the sugarcane fields and mills of Satara. Many go there with nothing but their sickles, and the payment to them are made at a “per sickle” rate. The title of the book thus becomes a reference to the dehumanisation and exploitation faced by the farmers. But the novel does not just stop with the farmers’ crisis. It presents a series of overlapping social problems—female foeticide, rape culture, internal migration, feudal power relations and casteism—in its narrative. The novel underlines the fact that it is women who have to suffer the most whatever the social evils are.

The Sickle makes incisive political and sociological observations about contemporary India. For instance, it takes a swipe at the ultranationalism in the country when it says, “The bigger the statue you can build, the more of a patriot and a devotee of valour you are.”

The Sickle is a daring novel, considering the growing intolerance against writers, filmmakers and intellectuals who portray the darker sides of India. The novel was originally published in Bengali and translated to English by Arunava Sinha. 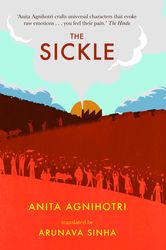