A fitting tribute to a great poet 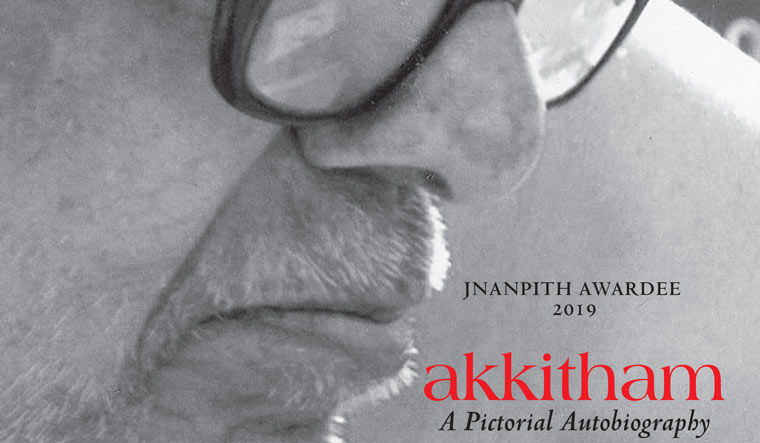 This is no ordinary autobiography. 'Akkitham: A Pictorial Autobiography' chronicles the life of the doyen of Malayalam poetry Akkitham Achuthan Namboothiri, but isn't written by him. Filled with his sketches, pictures and poetry lovingly put together by Bhaskarmenon Krishnakumar, the book is an intimate look at one of the towering figures of Malayalam literature.

There is no a better time to remember the poet. Akkitham passed away in October this year at the age of 94. Known for his simplicity—even when he was writing complex thoughts— Akkitham authored over 40 works, including short stories and plays. His most famous work is Irupatham Noottantinte Ithihasam.

Akkitham was eight when he wrote his first Sanskrit sloka: “If you irresponsibly draw such figures in the temples, the almighty god will bring everything to naught.’’ He wrote this on the wall with a coal, after he saw a lewd graffiti on the sanctum at Harimangalam temple.

Exposed to Rigveda from when he was a toddler and to aksharaslokam—literary pastime of those days where people sat in circles and reciting slokas “beginning with the first syllable of the third line of the shloka recited by the earlier participant’’—poetry came naturally to him.

He was 11 and emboldened by cashew fruits—forbidden to Namboodiris as they were ‘firangi’—he wrote six or seven shlokas. “I was delighted. Indeed amazed. But whom do I show these shlokas? I went to a knowledgeable lady in the neighborhood. She was well versed with Ezhuthachan’s works and Puranas. She could just not believe that I had composed those shlokas,’’ he writes.

Littered with anecdotes from his childhood—“My classmates and most elders took me for an imbecile,’’—including his love for drawing, him discovering poetry after reading Amarakosha, the unique thesaurus in verse, the book makes for a fascinating reading. “It was then that writing poetry turned out to be a not too difficult task,’’ he writes.

Going beyond just his life, the book also offers a glimpse into his thoughts, his beliefs, Communism—why he was attracted to the idea but didn't become a party member—and his philosophy. And more importantly, the reason he wrote poetry. “Why do I write poetry? To serve the society?,’’ he writes. “That there’s an intense desire to do so is true. But if it were only for that, why is it that I’m unable to write when everything is set? Or is it for my pleasure? If so, I should be able to write whenever I feel like. But that’s not done. And on many occasions poetry gushes out uncontrollably, when I plan to defer it. This is what it’s in brief. Guess what you will.”

The book is for anyone who has ever wanted to understand him better and even for those who just want a glimpse into the world of a committed poet. It is a tribute well deserved.