There is very little Devaki Jain, 87, has not done. She once drove a Land Rover from London to Kabul, eloped, lived with her lover for a year before they got married, worked with freedom activist Vinoba Bhave and befriended women’s rights activist Gloria Steinem. One of the leading economists of her generation, the Oxford-educated Jain’s memoir, The Brass Notebook—a twist on Doris Lessing’s The Golden Notebook—is worth its weight in gold for younger women, and not just because of her academic accomplishments.

The Brass Notebook begins with a quote from Moroccan feminist writer Fatema Mernissi: “To live is to look outside. To live is to step out. Life is trespassing.” Jain has done plenty of that. The book is a powerful testimony of that wonderfully freeing idea of life being a trespass.

Jain writes engagingly—and incredibly honestly—about her life. Her lessons in gender started young. She was eight when her sister had her first period. Her aunts decided it was important to celebrate her entry into womanhood. “Thus, as the day of her first period arrived she was put into a room where she was completely isolated,’’ writes Jain, who was chosen to live with her for four days. “We were like animals in a zoo.”

There are very few books that come endorsed by Amartya Sen, Desmond Tutu, Romila Thapar and Steinem—all of whom she knows personally. But that is not reason enough to read the book. The Brass Notebook is essential reading because it chronicles her life beyond her achievements. It is her adventures—and she has many—which make the book engrossing.

Her relationship with her husband, Lakshmi Jain, began while he was engaged to someone else. “He was ‘my man’, even though he belonged to the inconvenient caste….’’ she writes. “I plotted to be with him on our way to a wedding.” The story of their romance, in the face of opposition from her father, is thrilling. The power couple of that time, Jain writes about their public life and their contribution to the cooperative movement.

Along with writing passionately about passion—a rarity in the field of academics—Jain also brings alive the dream of India. There are her interactions with global stalwarts like Sen and her work for the Indian Cooperative Union. But more than that, the book is the story of a woman who is idealistic, determined, courageous and in love with life.

Not squeamish, she writes about her abortions during her live-in relationship with Lakshmi, about desire as well as pleasure. It is this candid, almost brutal honesty—a trespassing of forbidden boundaries—that makes the book extraordinary. 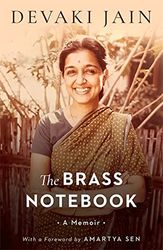 The Brass Notebook: A Memoir