The novel has been translated into English by Padma Viswanathan 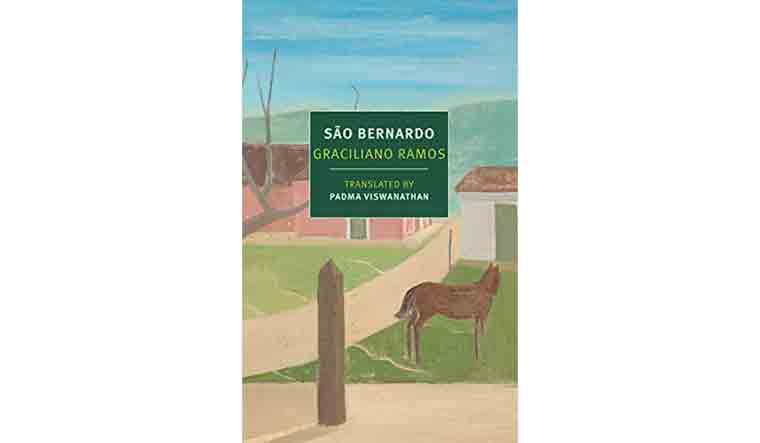 São Bernardo is a novel by Graciliano Ramos (1895-1953), a famous writer from Alagoas state in the remote northeast corner of Brazil. Padma Viswanathan has translated this into English and got it published by New York Review Books in May 2020.

It is the story of Paulo Honório, a poor farm worker who becomes landlord of the farm São Bernardo but finally loses everything and writes his memoirs. Paulo, the illiterate and rough man, goes to jail for knifing a guy over a girl. In the prison, he learns basic reading and writing. After the release from jail, he becomes an itinerant trader and makes some money. With that he buys the farm where he used to work as a daily wage labourer. He transforms the farm into a productive one with irrigation, dams, cotton crops, orchards, cattle ranch, lumber mill and a cotton gin. He becomes a wealthy landlord and gives job to others. Along the way, he manages to put down jealous and murderous rivals and makes it known that he cannot be messed with. He is a hard task master and expects productive outcome for his payment of wages. He comes to the attention of newspapers and politicians of the area.

After having achieved a respectable status, he looks for a suitable woman to marry and get children who will inherit his property. He marries Madalena, a poor school teacher from a nearby town. Madalena is kind, gentle and generous to the families who work in her husband’s farm. She pleads with her husband to be less harsh and more humane in his treatment of the labourers. But Paulo finds it as a nuisance and interference with his farm management. With his limited vocabulary and knowledge, he does not understand the literary and political conversations of his wife with the newspaper editor, school teacher, lawyer and priest who visit his house. He is wary of their ideas of communism and revolution. He starts suspecting his wife of infidelity and is jealous of her interactions with other men. He becomes paranoid and mistreats her harshly. Eventually he talks to her openly about his suspicion. Unable to bear the suffering, the innocent Madalena commits suicide. Thereafter, the educated people who were friendly to Madalena move away from Paulo.

Becoming a landlord with enough wealth and respected status with an educated city girl as a wife does not give Paulo peace and contentment. His success has ironically isolated him and made his life lonely and impossible. He disdains both the labour class from which he came and the wealthy elite to which he belongs now. He is harsh on the workers and always complains that they are lazy and shirk responsibilities. He is suspicious of the educated and wily city folks as exploiters.  When a city newspaper carries articles critical of him, he confronts the editor and beats him with a horsewhip. When Madalena gives birth to a son, he does not have any tender feelings even to the child which is weak and sickly. Love and affection are absent in Paulo's vocabulary.

At the end, Paulo looks back at the ‘fifty years senselessly squandered, mistreating myself and mistreating others, with the result that I’ve grown hard, so callous that no scratch could penetrate this thick hide and hurt the blunted soul inside. ﻿If I see myself in a mirror, I’m upset by my own hard mouth and hard eyes. ﻿I bet I have a tiny heart, gaps in the brain, nerves different from other men’s. Not to mention an enormous nose, enormous mouth, and enormous fingers. If this is how Madalena saw me, she must have found me unbelievably ugly”.

Reflecting on his mistakes and achievements, Paulo starts writing his story with the title São Bernardo, which is the name of his farm. He tells his story in the language of the class he has left behind but for the benefit of the educated class he does not like. He writes the story the way he talks. It is a simple, plain, dry and linear story without any twists, turns or suspense. There is no mention of football, carnival, samba or beaches to remind readers of the lively Brazilian culture.  There is no Latin American Magical Realism. There is no Borgesian verbal acrobatics, labyrinthian plots or intellectual inventions. There are no quotable passages or pearls of wisdom. There is no need to check Wikipedia.

The language used in the novel by Ramos is typical of the rural areas of the Alagoas state in northeastern Brazil. Alagoas is one of the smallest and poorest among the 27 states of Brazil. In the translator’s note, Padma Viswanathan has talked about the challenges she faced in translating the local expressions used in the novel. She had to take the linguistic help of native Brazilians.

I found this novel of Ramos similar in some respects to those of Jorge Amado, my favourite Brazilian author. Amado is also from the northeast part of Brazil but from the culturally richer state of Bahia. Amado uses a similar style of direct narration of stories and portrayal of characters.  But Amado’s characters are more colourful, playful and lively. Amado’s novels are encyclopaedias of the expressions, traditions, festivals, food and rituals of the Afro-Brasilians dominant in the Bahia region.

São Bernardo was originally published in 1934. Padma’s translation in English has just been released in May 2020.

Graciliano Ramos is called as “the Faulkner of Brazil”. While William Faulkner became world famous and won Nobel prize, Ramos is not known outside Brazil. Faulkner had sympathy for such Latin American authors and established the Ibero-American Novel Project to find and publish the best novels from every South American country. Ramos’ other novel Vidas Secas (dry lives) was chosen as Brazil’s representative for the Faulkner prize in 1962.

﻿Padma Viswanathan herself is a well-known author of two novels: The Toss of a Lemon and The Ever After of Ashwin Rao. She is an associate professor of creative writing at the University of Arkansas in Fayetteville, US.