Written by Marie Arana, an American author of Peruvian origin 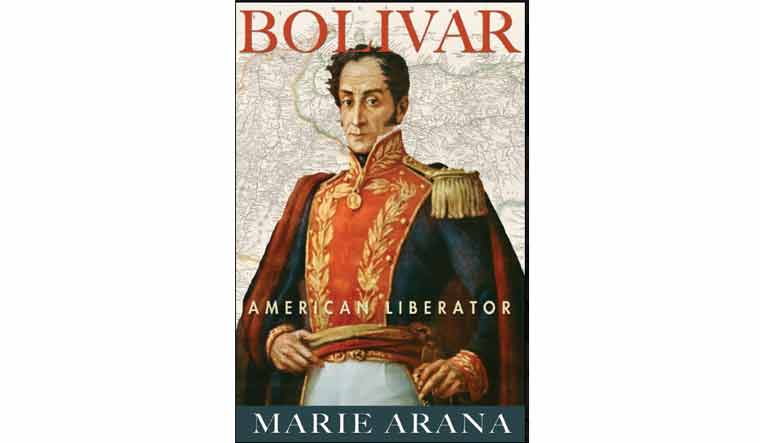 This is the second biographical book I have read on Simon Bolivar, my Latin American hero. Marie Arana, an American author of Peruvian origin, has made the biography more as an interesting story with her skills as writer of novels. It is different from the biographies written by historians. Arana’s portrayal of the real life of Bolivar in a magical way fits in with the tradition of Magical Realism of Latin America. The colourful and eventful life of Bolivar has come out vividly in the literary style of Arana.

The book Bolivar starts with the arrival of Bolivar on the afternoon of 10 August 1819, after having spent 36 days of traversing the flooded plains of Venezuela, six days marching over the vertiginous snows of the Andes and after crossing the icy pass at 13,000 feet at Paramo de Pisba. In this risky and most arduous journey, he had lost a third of his troops to frost and starvation. Bolivar had shown extraordinary stamina to withstand hunger, sleep deprivation and suffering in the battlefield. He had traversed 75,000 miles of hard terrain during all his campaigns with his legendary capacity for endurance. He was called 'Iron Ass' for his capacity to withstand long horse rides. He had suffered defeats, betrayals and setbacks many times in his military and political ventures. There were many attempts on his life. But he managed to bounce back with strong determination, inimitable courage and strong resilience of spirit.

Bolivar had a personal magnetism around him and aroused his troops with inspiring oratory and made them follow him blindly. Besides showing courage in leading his troops in battles he was equally comfortable in ballrooms as a dancer and spirited conversationalist quoting Rousseau in French and Julius Caesar in Latin.

He had single-handedly conceived, organised and led the liberation of five (Venezuela, Colombia, Peru, Ecuador and Bolivia) South American nations. He dreamed of a united Latin America based on democracy, development and justice. But his vision was far ahead of his times and was not shared by others.

Despite coming from a rich family with assets and after having become the president of the five countries he had liberated, he died a pauper. He did not have the money even to buy a passage by ship to Europe or proper medical treatment and recovery.

Bolivar was a hero of convictions and high moral principles. He gave speeches, drafted documents and wrote letters in a fiery, lyrical and moving way. At the same time, he was a man of contradictions with serious flaws. He was dictatorial, impulsive, ruthless and a womaniser. His talent as a brilliant war-time commander was not useful to build democracy during peace time.

In the end, Bolivar died as a frustrated, betrayed, disappointed, disgruntled and sick man disowned and unwanted by the countries he had liberated. During the end of his life, he made bitter statements such as “America is ungovernable”, “He who serves a revolution ploughs the sea”.

Eventually Bolivar was forced into exile, the eternal theme in real life and the literature of Latin America whose history is filled with the exile of many presidents, poets and revolutionaries.

Many years after his unceremonious death in a remote corner of Colombia, he was reinstated by Venezuelan presidents as an icon and glorified as Liberator. Chavez immortalised Bolivar by renaming the country as Bolivarian Republic of Venezuela. He tried to imitate Bolivar with his own brand of 21st century Socialism and made a mess of Venezuela pushing the country from democracy to dictatorship and from prosperity to poverty.

Besides Bolivar, the colourful character of Manuela Saenz has also come out well in the book. Manuelita deserves the title “La Libertadora del Libertador” with her audacious bravery and uncompromising commitment and unconditional love to Bolivar. She had inspired Bolivar when he was depressed and saved him from an assassination attempt. She added more colour to the life of Bolivar with her boisterous parties, wearing of military uniform and uncommon courage while standing up to her critics. When she heard about the death of Bolivar, she said: “ I loved the Liberator when he was alive. Now that he is dead, I worship him.”

Arana’s book is a useful addition to understanding Bolivar and Latin America.

The author is a former ambassador to Latin American countries