Trump himself was not on trial 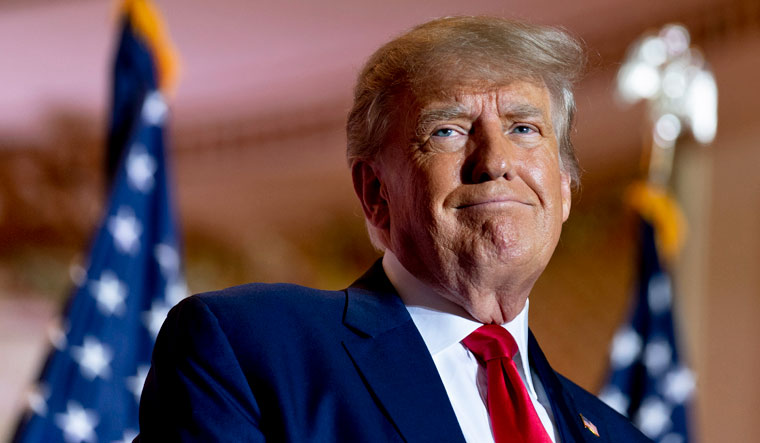 Donald Trump's company was convicted of tax fraud Tuesday for helping executives dodge taxes on extravagant perks such as Manhattan apartments and luxury cars, a repudiation of financial practices at the former president's business as he mounts another run for the White House.

A jury found two corporate entities at the Trump Organisation guilty on all 17 counts, including charges of conspiracy and falsifying business records. Trump himself was not on trial. The verdict in state court in New York came after about 10 hours of deliberations over two days.

The conviction was validation for New York authorities who say their three-year investigation into Trump and his businesses is continuing. The probe, which began as an inquiry into hush-money payments made on Trump's behalf, later morphed into an examination of the company's asset valuation and pay practices.

The company faces a fine of up to $1.6 million. Sentencing is scheduled for Jan. 13. The defense said it will appeal. A former president's companies now stand convicted of crimes. That is consequential, Manhattan District Attorney Alvin Bragg said outside the courtroom. It underscores that in Manhattan we have one standard of justice for all."

Trump, a Republican who launched his 2024 campaign last month during the trial, blasted the verdict as a part of a Democrat-led MANHATTAN WITCH HUNT!

This case is unprecedented and involved no monetary gain to these two Corporations, Trump said in a statement, adding: New York City is a hard place to be Trump.' The verdict adds to mounting legal woes for Trump, who faces a criminal investigation in Washington over the retention of top-secret documents at his Mar-a-Lago estate, as well as efforts to undo the results of the 2020 presidential election.

Those inquiries are being led by a newly named Justice Department special counsel. The district attorney in Atlanta is also leading an investigation into attempts by Trump and his allies to overturn his loss in that state.

The verdict also comes amid a series of self-inflicted crises for Trump in recent weeks, including anger over his dinner with a Holocaust-denying white nationalist and the antisemitic rapper formerly known as Kanye West, and the former president's for the termination of all rules, regulations, and articles, even those found in the Constitution to address his baseless claims of mass election fraud.

The Trump Organisation and Trump's management of it was at the center of The Apprentice, the reality show that solidified his global celebrity. That fame in turn helped fuel his unlikely political rise, allowing him to sell himself to voters as a successful businessman who could take lessons from that sphere and apply them to Washington.

The Manhattan case against the Trump Organisation was built largely around testimony from the company's former finance chief, Allen Weisselberg, who previously pleaded guilty to charges that he manipulated the company's books to illegally reduce his taxes on $1.7 million in fringe benefits. He testified in exchange for a promised five-month jail sentence.

To convict the Trump Organisation, prosecutors had to convince jurors that Weisselberg or an underling he worked with on the scheme was a high managerial agent acting on the company's behalf and that the company also benefited.

Trump Organisation lawyers repeated the mantra Weisselberg did it for Weisselberg throughout the month-long trial, contending that he had gone rogue and betrayed the company's trust. Weisselberg attempted to take responsibility on the witness stand, saying nobody in the Trump family knew what he was doing. It was my own personal greed that led to this, an emotional Weisselberg testified.

But prosecutor Joshua Steinglass alleged in his closing that Trump knew exactly what was going on and was explicitly sanctioning tax fraud.

Bragg slipped into the courtroom as the verdict was being read. Afterward he refused to answer questions from reporters, ducking behind a glass door as he was asked if he regretted Trump wasn't charged personally.

New York Attorney General Letitia James, whose office assisted in the investigation, called the verdict a clear message that no one, and no organisation, is above our laws. In some ways it's a limited victory for prosecutors, however.

No one, save for Weisselberg, is going to prison. No one is putting a padlock on Trump Tower or forcing the company out of business. And a potential $1.6 million fine is a rounding error on the budget of an enterprise that boasts billions of dollars in assets.

Still, the Trump Organisation may now run into some trouble getting loans and making deals, and New York City could have more leverage to try to end the company's contract managing a city-owned golf course in the Bronx.

But even as the trial was unfolding, the company struck a deal with Saudi developer Dar Al Arakan to license the Trump name for a golf, hotel and residential development in Oman. Next year, three of Trump's golf courses will host tournaments for Saudi-backed LIV Golf.

The bigger threat to the company could be the civil lawsuit James filed in September alleging that it misled banks and others about the value of its many assets, a practice she dubbed the art of the steal.

James, a Democrat, is asking a court to ban Trump and his three eldest children from running a New York-based company and is seeking to fine them at least $250 million. As a preliminary measure, a judge has appointed an independent monitor to oversee the company's operations while the case is pending. Bragg inherited the Trump investigation when he took office in January. His predecessor, Cyrus Vance Jr., had authorised his deputies to seek a grand jury indictment for Trump, but Bragg soon shut that down and they quit.

Officially, he says, the investigation is active and ongoing. On Monday he sent his strongest signal yet that he's interested in pursuing more charges, hiring former acting US Assistant Attorney General Matthew Colangelo to lead the probe. Bragg and Colangelo worked together on Trump-related matters at the state attorney general's office.