Why China's ‘shock and awe’ protests are self-limiting in nature

The very nature of the ongoing unrest will restrict its continuity 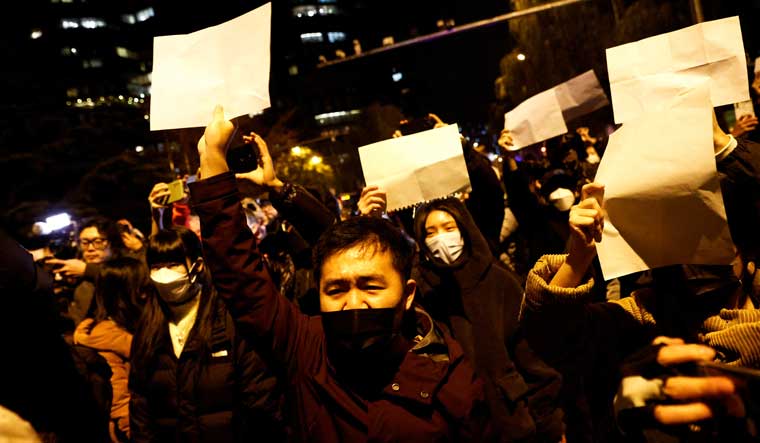 Besides taking the authoritarian Communist Party regime at Beijing unawares with its speedy spread, the nationwide protests in China sparked by the Urumqi fire tragedy has served to underline the seeping frustration and seething rage over the government’s ‘Zero Covid’ policy.

The protests over a fire in a residential high-rise in Xinjiang’s Urumqi on November 24 where 10 people died locked up in their apartments, has in just four days spread to the length and breadth of China.

Despite claims in the western media, to the contrary, the protests may be self-limiting in nature and may peter out. Comparisons drawing parallels with the much like the Tiananmen Square protests of 1989, Hong Kong, Tibetan and Uighur unrests are fallacious at best.

There are three prime reasons why the protests may soon die a natural death.

First, the aim of the ongoing protests is based on a very narrow aim—that of the government’s ‘Zero Covid’ restrictions that can only be described as dictatorial and autocratic. On the other hand, the Tiananmen Square protest was about substantive political reforms.

If the present dispensation relaxes the Covid restrictions—on which there is seemingly a national consensus—the ongoing unrest loses its raison d'être and hence its sting.

There is a growing concern among common citizens of global companies moving out of China because of the government’s rigid Covid policy. This has unified geographies cutting across ethnic lines.

Therefore, as far as the possibility of a metamorphosis of the current unrest into a broader anti-government and anti-communist movement is concerned, it is yet a far-fetched one.

While the protests had assumed the hues of a Uighur-sparked protest that originated in the Muslim-majority Xinjiang province, China’s overwhelmingly Han majority will withdraw itself as soon as the Uighur question is raised.

The political aim of the Uighur movement and that of the Chinese population are contradictory. The current unity has emerged only due to the massive constraints on livelihood due to the government’s zero Covid policy. Therefore, the chances of the current unrest changing into a broader political movement are very slim.

Second, after substantial consolidation efforts including the latest one at the 20th Party Congress, President Xi Jinping’s control over the CCP is complete. Already President for a third term, all of his six key followers are now part of the Politburo Standing Committee.

Already positioned to ascend to the hallowed position that was only occupied by Mao Tse Tung, Xi has ensured there is no space for any dissonance to him, nor a rival faction to Xi in CCP, at the current party structure.

Third, the powerful People’s Liberation Army (PLA) is solidly behind the government, especially after Xi’s iron-fisted effort to subordinate the military to the party interest. With the CCP and the PLA on the same page, there is no power in China that can shake the present authoritarian dispensation at the moment.

But at the same time, the dizzying pace with which the unrest spread across the swathe of the country in just a matter of days should bother Beijing no end.