Imran Khan to address long march despite threat to his life 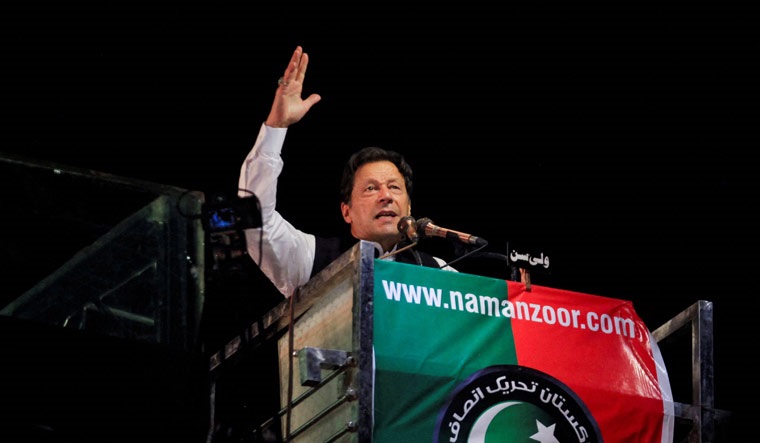 Pakistan's garrison city of Rawalpindi, where the powerful Army is based, on Saturday braced for a political show of strength by former premier Imran Khan despite a threat to his life.

Khan, who is recovering from bullet wounds suffered during an assassination bid on November 3, is set to address his supporters in Rawalpindi. He has said his Pakistan Tehreek-e-Insaf party's protest, demanding fresh general elections, would be completely peaceful.

Khan's supporters are on the move from all corners of the country to reach Rawalpindi, the twin sister city of Islamabad, where a stage has been prepared on the Sixth Road Flyover in the middle of historic Murree Road.

Some avid supporters, who have already landed in the city, were housed in a temporary tent structure set up in the Allama Iqbal Park near the venue of the rally.

Khan would leave his Zaman Park residence in Lahore at around 1 pm local time in a bullet-proof vehicle which was sent to his place. He is expected to address his supporters at around 6 pm.

It is not clear if the rally would disperse after his address and convert into a sit-in. However, the Rawalpindi city administration has given only one-day permission for the rally.

The Rawalpindi administration also issued a notification that read that the England cricket team would soon arrive in Rawalpindi, therefore the venue should be completely vacated after the rally was over.

Khan, 70, said on Friday that despite being injured he is determined to head to Rawalpindi for the sake of the nation.

Khan in his message said that he was fighting for the real independence of the country and the struggle would continue until fresh elections were announced.

We are fighting a war for the Haqeeqi Azadi. The one point agenda is elections, he said, as he accused the current government of destroying the economy and running away from elections due to fear of defeat.

Separately, he told a news channel that if the snap elections were not announced and the government stuck to its stance of holding the general election on time next October, then the masses would throw out the incumbent rulers through force.

The Haqeeqi Azadi movement will not end today (Nov 26), but continue until justice is dispensed with, he said.

He called upon the public to reach the garrison city for the protest movement.

Going to Rawalpindi tomorrow (Saturday) as it is a decisive time in the country. We want to become a country that Quaid-e-Azam and Allama Iqbal dreamt of, he said on Friday.

The former premier said some elements wanted an altercation between him and the Army.

He added he only had issues with some black sheep within the Army and not the entire institution.

Khan said the two bullet wounds in his thigh were healing, but he was facing difficulties walking owing to the third bullet that pierced the lower part of his leg.

He also acknowledged that he was still facing threats and would take all precautionary measures.

Interior Minister Rana Sanaullah on Friday said that Khan would get a date for a snap election through protests.

If Imran Khan wants elections he should behave like a politician and hold talks with the political leaders, he said.

There are intelligence reports about the threat to his life and his party has also acknowledged the looming threat.

Sanaullah also warned that there was a threat to Khan's life and urged him to postpone the rally.

Khan said he would take all precautionary measures.

He also said that it was not the first attack on his life as last month his helicopter had to make an emergency landing.

PTI secretary general Asad Umar also said that Khan was facing threat and the government would be responsible if something happened to him.

But it is believed that Khan is going ahead with the protest rally as he wants to keep up the political momentum that he generated soon after the toppling of his government in April this year through a non-confidence vote.