American troops were at risk from Turkish strike on base in Syria: US military 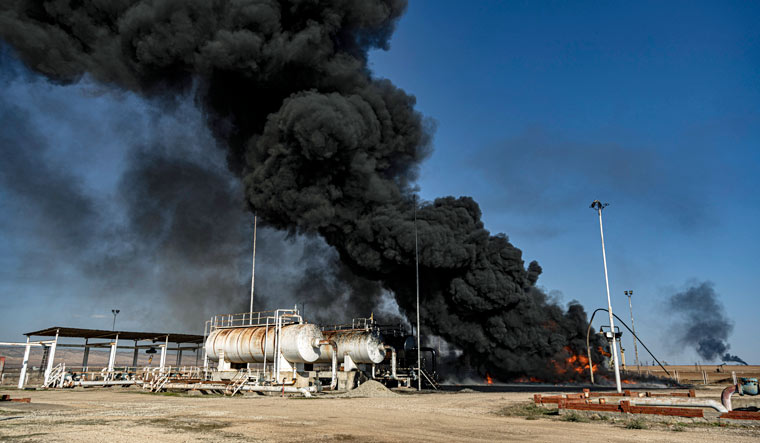 A smoke rises from an oil depot struck by Turkish air force near the town of Qamishli, Syria, Wednesday, Nov. 23, 2022 | AP

The US military says that the safety of American troops was threatened by Turkish air strikes in Syria on Tuesday. And the escalating situation jeopardized years of progress against Islamic State militants, Reuters reported. However, no US service members were injured in the strike.

"Recent air strikes in Syria directly threatened the safety of U.S. personnel who are working in Syria with local partners to defeat ISIS and maintain custody of more than ten thousand ISIS detainees," the Pentagon's spokesman, Air Force Brigadier General Pat Ryder, said. Ryder called for an “immediate de-escalation” of the situation.

On Wednesday, Joint Chiefs Chair Gen.Mark Milley spoke to his Turkish counterpart, Gen. Yasar Guler. The two of them spoke about “several items of mutual strategic interest.” the Pentagon in a statement said it is concerned about the “deliberate targeting of civilian infrastructure.”

The comments represent the strongest condemnation by the US, Turkey's NATO ally over its operations in recent days against a Kurdish militia in northern Syria to date. About the strike on Tuesday, CENTCOM spokesman Colonel Joe Buccino said US troops were not at the base.

“Turkey does continue to suffer a legitimate terrorist threat, particularly to their south. They certainly have every right to defend themselves and their citizens,” National Security Council Coordinator for Strategic Communications John Kirby told CNN.