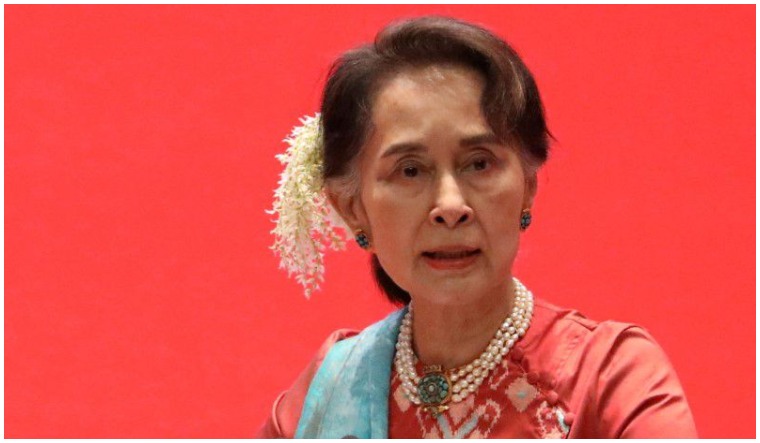 A court in military-ruled Myanmar ruled Tuesday that the last trial for corruption of the country's ousted leader Aung San Suu Kyi will go ahead after finding that state prosecutors submitted enough evidence to sustain her indictment.

Suu Kyi, who was arrested when the military seized power from her elected government in February last year, has since been charged with a total of 12 counts under the anti-corruption law, each punishable by up to 15 years in prison and a fine. The corruption cases are among several charges pursued by the military against her.

Rights groups and supporters of Suu Kyi say the charges against her are politically motivated and an attempt to discredit her and legitimize the military's seizure of power while preventing her from returning to politics.

Suu Kyi has already been sentenced to 26 years' imprisonment after being convicted on charges of illegally importing and possessing walkie-talkies, violating coronavirus restrictions, breaching the country's official secrets act, sedition, election fraud and seven other counts of corruption.

The case the court considered on Tuesday concerned five counts of corruption against her and and former president Win Myint related to the rental, purchase and maintenance of a helicopter by a third member of the Cabinet in her former government. Suu Kyi was the de facto head of government, holding the title of State Counsellor.

The state-run Global New Light of Myanmar newspaper reported in December that the Anti-Corruption Commission found that she and Win Myint abused their power and caused a loss of state funds and property by neglecting to follow financial regulations in granting permission to then-Social Welfare, Relief and Resettlement Minister Win Myat Aye to rent and buy a helicopter.

Win Myat Aye is currently serving as minister of Humanitarian Affairs and Disaster Management in the National Unity Government, an opposition group that lays claim to being the country's legitimate, parallel administration. It is widely popular but the military has declared it a terrorist group.

A legal official familiar with Tuesday's court proceedings confirmed that Suu Kyi and Win Myint pleaded not guilty after they were formally indicted on five counts of corruption. The official, who spoke on condition of anonymity because he is not authorized to release information, said they appeared to be in good health.

Under Myanmar law, a judge can order an end to a trial after the prosecution has presented its case if it is found not to have merit. This first phase is roughly similar to a grand jury process in Anglo-American law. If the judge finds the prosecution case credible, the trial continues into a second phase in which the defense presents its case and a verdict is delivered.

Suu Kyi's trials have been held in a purpose-built courtroom in the main prison on the outskirts of the capital, Naypyitaw. The hearings are closed to the media and the public and because Suu Kyi's lawyers were served with gag orders last year, they are barred from releasing details of the proceedings.

The army's takeover in 2021 was met with widespread non-violent protests that security forces tried to crush with lethal force, eventually triggering significant armed resistance leading to what some United Nations experts have characterized as a civil war.