Status quo is not an option, says Truss 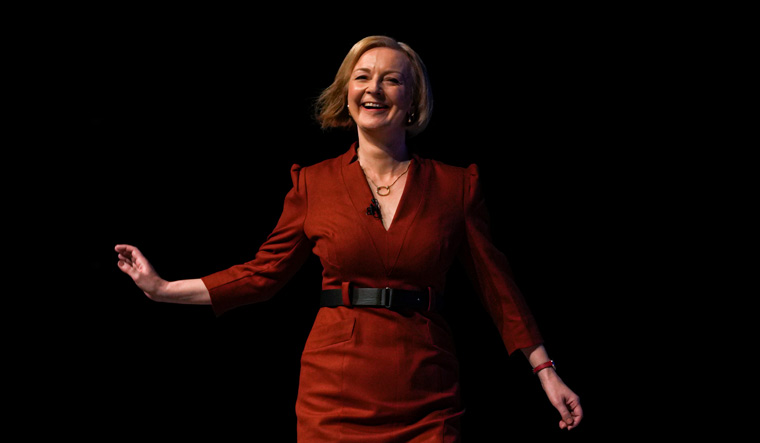 British Prime Minister Liz Truss on Wednesday promised to get the country through "stormy days", as she launched a blistering attack on the "anti-growth coalition" trying to hold back her pro-growth agenda.

In her speech to the Tory conference, which has been marked by U-turns and deep internal division, Truss admitted that the policies of her government would cause "disruption".

At the same time, she said "the status quo is not an option" and "we must stay the course".

"I have fought to get where I am today," the 47-year-old prime minister said, highlighting how the barriers she had faced as a woman "made me angry and it made me determined".

Her 35-minute speech came against a backdrop of financial and political turmoil following the government's mini-budget last month. Her address was briefly interrupted by environmental protesters from Greenpeace, holding up a sign reading "who voted for this".

Truss acknowledged "these are stormy days", citing the global economic crisis caused by the pandemic and the war in Ukraine.

But she added: "I'm determined to get Britain moving, to get us through the tempest and to put us on a stronger footing as a nation."

Truss also vowed to take on the "anti-growth coalition" and "enemies of enterprise", including opposition parties, "militant unions" and environmental campaigners - like the ones, she said, who heckled during her speech.

She railed against those she accused of trying to hold back her pro-growth agenda, including Labour, "militant" unions, "Brexit deniers," Extinction Rebellion and "some of the people we had in the hall earlier".

She also accused her enemies of preferring to "talk on Twitter" than take tough decisions, and of taxiing "from north London townhouses to the BBC studio to dismiss anyone challenging the status quo".

Markets reacted badly to the plans for 45bn in tax cuts funded by borrowing, while the government's U-turn on its plan to scrap the 45p tax band for the highest earners was fuelled by opposition from some Tory MPs.

Highlighting her own background, Truss said her upbringing in the 1980s and 1990s meant she knew what it was like "to live somewhere that isn't feeling the benefits of economic growth".

Echoing her predecessor Boris Johnson's pledge when he became prime minister, she promised to "level up" the country "in a Conservative way, ensuring everyone everywhere can get on".

There was a muted reaction from the financial markets, with the pound falling slightly against the dollar during Truss's speech, the BBC reported.

The Tory conference has been overshadowed by divisions, after the government made a dramatic U-turn over its plans to scrap the top rate of income tax.

Truss argued cutting taxes was "the right thing to do morally and economically" as it allowed people to keep more of their own money so they are "inspired to do more of what they do best".

"I believe that you know best how to spend your own money, to get on in life and realise your own ambitions," she said, adding: "I want what you want."

However, in attempt to reassure the jittery markets, she promised to "keep an iron grip on the nation's finances".

But in a sign of the difficulties she faces, shortly ahead of her speech, YouGov released polling suggesting that Truss is already more unpopular than her predecessor Johnson or former Labour leader Jeremy Corbyn ever were.

Just 14 per cent of the public now say they have a favourable impression of the prime minister compared with 26 per cent who said so between 21-22 September.

The Tories are refusing to abandon their "kamikaze budget" that crashed the economy, Labour leader Keir Starmer has said in response to Truss's speech at the Conservative Party conference.

The Labour Party would "do things differently" amid the cost of living crisis, he said.

"People across Britain are worried about rising bills, rising mortgages, rising costs. Yet the Tories still refuse to abandon their kamikaze budget that crashed the economy," he tweeted.

"Labour would do things differently because we know real growth comes from working people and businesses," Starmer added.