At its core, it is classic liberalism with an anti-Communist vision 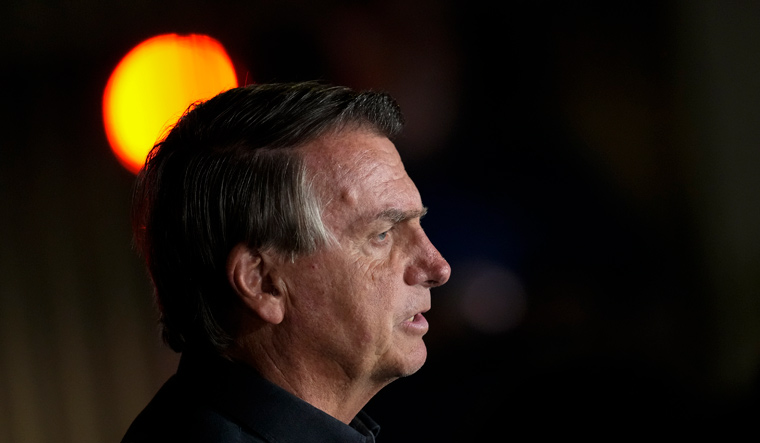 While the country was distracted by polls that showed a lopsided lead likely to turn into an electoral rout, election night resulted in the unexpected defeat of the anointed “rescuer of democracy”, and in the process unveiled the creation of a powerful national movement.

You would be forgiven for thinking this is a reference to Trump’s remaking of the American political landscape. But this is what Brazilian president Jair Bolsonaro, until recently a politician without a party, did in the first round of this year's elections, on October 2.

The methods, actions, and the way the political climate in Brazil has descended into vicious verbal attacks and fears of violence are an export of the Trump populist prototype and the globalisation of a conservative movement that taps into already existing feelings among the population. Trump's friend Bolsonaro owns the Brazilian franchise.

The Trump operating system is easily recognisable in its norm-breaking, attacks on the traditional media as biased political opponents, the mockery and bile toward political opponents and gay groups, the talk of god and anti-abortion rhetoric, the distortions of reality, and the spreading of fake news while labeling unpleasant facts as “fake news.” All of those have become Bolsonaro trademarks in Brazil, an ongoing attack on objective truth and inclusiveness.

As the elections played out, no one garnered 50 per cent of votes needed for an outright win, so a runoff election is scheduled for October 30. But former president Luis Ignacio Lula da Silva is the Left’s once-and-future-king, and was predicted to win by some 10-14 points over Bolsonaro.

Lula did come in first place, but Bolsonaro won. The 48.4 per cent to 43.2 per cent margin represented a significant shift toward Bolsonaro from those supporting minor candidates, and undecideds. Further, Bolsonaro elected consequential numbers of those he endorsed in the legislature and governorships, creating a strong bench of support for his policies.

The impact is that something has changed in a meaningful way, there is a real polarisation in the electorate and in elected office.

While Lula’s campaign-closing rhetoric celebrated an upcoming early and decisive victory, it focused on the shiny object of outrageous, seemingly unacceptable comments of the opposition as if to convince itself that its side had the moral high ground. It ignored the other side, not looking at the fervor, financing and organisation of its candidates and missing the undercurrent of support in the electorate.

There is a deeper story, however. In electing eight governors, 21 out of 27 senators, and gaining nearly twice as many seats as Lula’s party in the lower chamber while also showing a stunning strength and staying power himself, Bolsonaro reproduced the Trump formula in tapping into a part of the electorate yearning for leadership and creating a political movement to stay.

The establishment is now under Bolsonarian threat, a silent movement has gained new voice and a good share of elected offices; it is the beginning of a new political era.

He changed the Brazilian right, said Menck of Bolsonaro. “He built a strong ideological bench.”

There used to be a so-called right, he notes. “Apparently, they are elements much more ideological in the sense of conservative positions that appeal to the electors, and that surprised the analysts.”

Bolsonaro showed he has political weight in electing a lot of people, added Menck. “He had a lot more strength.”

In elections for governors and the legislature in current and former Lula stronghold states of Minas Gerais, Sao Paulo, and Rio de Janeiro, the election showed that Bolsonaro expanded his base of support.

“I believe that the right is finally organising itself,” said Menck, explaining that in the history of Brazil since the dictatorship of Getúlio Vargas (1930-45) there has always been a strong state paternalism and that this may be a point of inflection that leads to a more liberal society.

“Statism was good but for more than 20 years it has not been working. Until 1980 the country prospered well, but since then it has not been able to maintain that growth. The right thinks that is due to excess protectionism on the part of the state.”

Bolsonaro is not the originator of that thinking, points out Menck, adding, “but it did coopt the ideas and political winds of Olavo de Carvalho.”. Carvalho, who died earlier this year, was a former communist who was worshipped by the right and dismissed by others as an extremist who became a virulent voice against the Left in Brazil.

Bolsonaro made himself the spokesman and figurehead for the quiet movement spurred by Carvalho’s online waves, according to Menck.

“At its core it is a classic liberalism with an anti-Communist vision,” explains Menck. “Carvalho’s philosophies crystallized in the postures of Bolsonaro...He inspired a whole generation, and it is now bearing fruit.”

In Brazil, rightism has been very rigid; this is the first time there is an alternative possibility, explains the historian.

That is strikingly similar to what analysts say is Trump’s genius, that he tapped into the undercurrent of a feeling that needed open expression and a champion.

“The election poured a Bolsonarismo purified and homogeneous,” says political scientist and author Camila Rocha, who has been devoting her time since 2019 conducting polls to understand how presidential voters think and how they identify themselves, according to communication from the Historical and Geographic Institute of Brazil’s Federal District, (IHGDF).

The gains in Bolsonaro’s party in the legislatures extended to many of the candidates with the largest margin of victory in legislative, federal and state elections, noted the IHFDF text. That shows deep underlying strength.

“Nearly all of them share the same characteristic, they form a hard core of Bolsonarismo,” wrote Rocha, who is also the author of 'Less Marx, More Mises; Liberalism and the New Right in Brazil', a book based on her award-winning doctoral thesis.

Her thesis concurs with Menck’s assessment that the origins of this new right in Brazil has its genesis in the proliferation of digital counter-publics like Carvalho’s audiences that thrived during the height of Lula’s rule.

“These candidates align with people who voted for Bolsonaro four years ago, and who, with the passing of time adopted speeches that practically copied the president’s declarations in live feeds and social networks,” observes Rocha in her analysis.

“By the results of the elections this year, it is an expressive group. They impacted by specific action in favor of Bolsonaro. They criticize traditional media, they are against the possible legalisation of abortion, they battle against a supposed gender ideology, and talk of God, family, and freedom.”

These are elements imported from the Trump movement in America, noted Menck.

“Another portion of those who elected Bolsonaro in 2018 became disenchanted with the president and some even regretted their vote, yet they had no alternative. They are people that do not vote for [Lula’s] Worker’s Party and at any time they will end up staying with the actual president at the last minute for lack of options,” writes Rocha.

In some ways, a most interesting similarity with the Trump surprise in the 2016 US election, is that in the October 2 results, the voters ended up surprising the analysts and the pollsters that had predicted that Bolsonaro would have a ceiling of support between 20 to 37 per cent.

The first-round final 5 per cent margin of difference between Bolsonaro and Lula showed they were wrong, the analysts were wrong, and the polls were wrong. Further, widespread gains in electing Bolsonaro supporters showed that there is a Bolsonarismo that is stronger and deeper than estimated.

Just like in the post-mortems of the US polls failure to predict a Trump victory, the explanation is that Bolsonaro voters in Brazil are embarrassed to reveal themselves to pollsters.

“There are people that speak of an embarrassed voter, I think it is a silent vote. That person was waiting to see what was going to happen. That is why we can’t talk about a failure of the polls,” says Rocha.

Since the 1930s, the state right has been a wrestling match between elites, says Menck. “Now it is the electorate, they want a return to old values, they do not want to accept political correctness, they are very conservative.”

Initially, much of Bolsonaro’s support was anti-PT (Lula’s Workers’ Party), explains Menck. “But now it can be the creation of a Bolsonaro base. I don’t believe it is as much Bolsonarismo as an ideology as it is fitting into the undercurrent of a movement. It is a question of ideas such as anti-communism and a repudiation of the left’s victimism.”

Victimism is the view that the left’s traditional support for reforms that oppress people turns those people into victims.

“The phenomenon is that the electorate got tired of that victimism, the elections showed a strong current, highlighting a polarisation. The great victory of Bolsonaro was to show that the liberals are more numerous than what the press says,” concluded Menck.

In those numbers may lie the outline of a Bolsonarismo independent of Bolsonaro.

While Lula won the state of Minas Gerais, it elected a governor closely aligned with Bolsonaro ideology, pointed out Menck.

In Sao Paulo, the country’s most populous state, its industrial capital, and Lula stronghold, Bolsonaro’s former infrastructure minister outperformed forecasts of his defeat, taking a 42.6 to 35.5 lead into a runoff.

In the state of Para, which Lula won by nearly 12 points, Sergio Moro, the former judge who led the investigation that put Lula in prison, then became Bolsonaro's justice minister, and who was later discredited when ethics violations resulted in the vacating of Lula’s conviction, was elected as senator with a 4-point margin over an ex-governor closely linked to Lula’s Workers Party.

Those gains mark the foundation of a mounting Bolsonarist movement that is conservative and populist, and at the same time comfortable with the idea of coming to power by democratic means and then subverting the state from within, even discrediting democracy and delegitimizing elections through unfounded accusations, fake news, and blaming mainstream journalism for bias in order to remain in power.

Like Trumpism, Bolsonarismo comes with a simple visual image—a yellow shirt instead of a red hat that immediately identifies his followers to one another. It also comes with authoritarian actions they see as badges of straight talk and strength, showing contempt for the left, gays, indigenous people, women, environmentalists, and human rights groups.

Like Trump, Bolsonaro did not elaborate an ideology, but he has generated a movement, a language of power, and an identity that is a far-right infrastructure that will remain in Brazilian society through those he elected with his support.

“It is a global movement, and this is the repercussion here,” said Menck.