More than 75 people have been killed so far 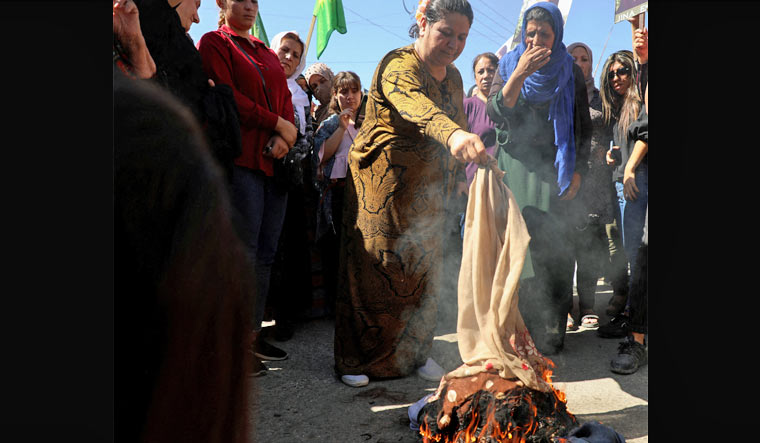 Women burn headscarves during a protest over the death of 22-year-old Kurdish woman Mahsa Amini in Iran, in the Kurdish-controlled city of Qamishli, northeastern Syria September 26, 2022 | Reuters

Iranians have been protesting for 10 consecutive nights over the custodial death of Mahsa Amini, who was detained because the police found a fault in her hijab. People have been taking to the streets and raising slogans like 'death to the dictator' despite a warning from the Iranian judiciary. More than 75 people have been killed so far as authorities continue to crack down on protesters.

Authorities on Monday arrested about 1,200 protesters. 20 journalists were among the arrested. Iran has strict rules on hijab headscarves and modest clothing. Protesters have been taking to the streets since September 16-- Mahsa Amini's death.

Protesters have also been calling for the end of rule of supreme leader Ayatollah Ali Khamenei, 83, who has been in power for over three decades. Security forces have been using tear gas to try and disperse the crowd of protesters.

"We call on the international community to decisively and unitedly take practical steps to stop the killing and torture of protesters," Oslo-based group Iran Human Rights (IHR) director Mahmood Amiry-Moghaddam told AFP. The IHR has said that according to video footage and death certificates obtained by them, live ammunition is being fired on protesters.

Teheran police have been deployed on duty for 24 hours. The government has been restricting social media applications like Instagram, Whatsapp and Linkedin-- this is making it difficult for protesters to share their videos with the outside world.