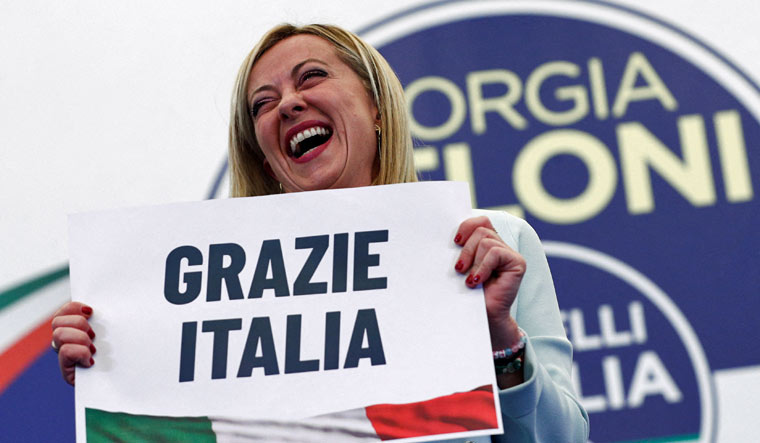 Italy is set to get its first female prime minister after the head of the nationalist Brothers of Italy party, Giorgia Meloni won the elections. It will also be the first time the country will be under the most right-wing government since World War II. Meloni called for unity to help confront the country's many problems."If we are called upon to govern this nation, we will do so for all Italians, with the aim of uniting the people, of exalting what unites them rather than what divides them," Meloni told Reuters. "We will not betray your trust," she added.

Her alliance, which includes Matteo Salvini’s League and Silvio Berlusconi’s Forza Italia, claimed about 43 per cent of the vote. This gives them 114 seats in the Senate-- 104 seats are required for a majority.

45-year-old Meloni, who has little experience governing emerged from the political fringes after leading the opposition to Mario Draghi’s technocratic administration, a Bloomberg report reads.

“We haven’t arrived,” Meloni told Bloomberg. “This is a starting point. And tomorrow we will have to show what we are worth,” she added.

Meloni's alliance government is taking over at a crucial time for the country that faces an energy shortage triggered by the war in Ukraine. The war has also hit the country's financial growth. Meloni began her political career in the 1990s as a far-right activist. Besides assuring voters she will keep Italy's debt under control, Meloni, in her campaign, made fiery remarks on the European Union, immigrants and LGBTQ groups.

Far-right leader Giorgia Meloni, who campaigned on a God, family and homeland mantra, has also called for Italy to reverse its demographic trends by proposing bigger financial incentives for couples to have children.

Meloni's government will look to deviate from former PM Mario Draghi's reform plans, which is bound to earn her a strong hand in the government. One of the first challenges the new government will face is to present a budget plan by the end of the year to be presented to the parliament and the European Union.

NATO is a key point for Meloni's coalition government with Matteo Salvini’s League and Silvio Berlusconi’s Forza Italia. Both Forza Italia and Brothers of Italy are Euro-sceptic and jointly they call for a review of EU rules on public spending and economic governance. The alliance also calls for the promotion of Europe's Jude-Christian and classical roots.

The alliance has said it would re-evaluate the minimum pension, and social and disability payments. They would also reduce the tax burden for families, businesses and the self-employed.

Immigration has been a big part of Meloni and Berlusconi’s campaigns. They have promised tighter border control, establishing EU-managed centres outside the bloc to evaluate asylum applications and blocking boat landings. With a large number of Italians wondering how they will pay high energy bills as the country heads into colder months, the alliance has promised to diversify energy supplies, consider using nuclear energy and implement a plan for energy-self sufficiency by relying on natural gas as much as possible.