What next for the Rohingya refugees?

'Relocation is a grey area, there is prejudice as all Rohingyas are Muslims' 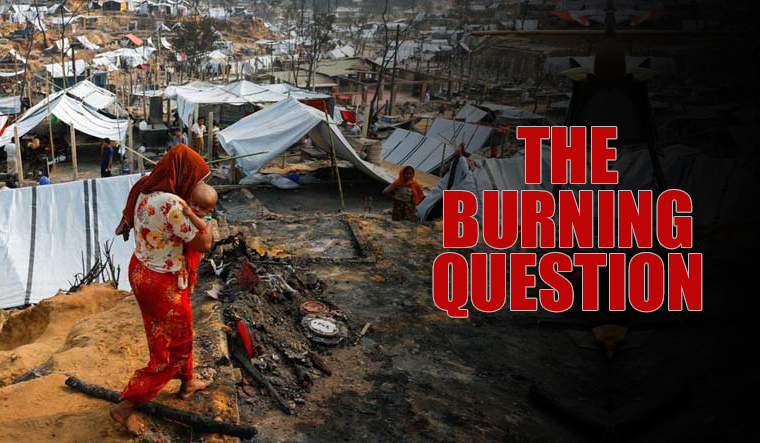 It has been five years since the exodus of Rohingyas into Bangladesh; five years of uncertainty and leading lives that one wants to. Return to Myanmar seems bleak for the risk of being prosecuted looms. While the refugees are keen to return to their homeland, neighbouring nations like India and China need to put pressure on Myanmar, and so do world powers like the US and UK.

THE WEEK talked to Masum Mahbub, director of policy and partner engagement at OBAT Helpers Inc. and Dr Taifur Rahman, health coordinator and director general at Health Services in Dhaka Bangladesh. Here's what they have to say:

It has been five years since the exodus of Rohingya refugees from Myanmar. What next for them?

Masum Mahbub: There are multiple angles from which to look at it. We at OBAT Helpers have been helping Rohingya refugees from day one. We were already in Bangladesh helping

internally-displaced people. When we saw in paper that these refugees were coming in, we sent an emergency team immediately. We started coordinating with the UN and government agencies-- we still do.

There is no clear path for repatriation yet, though an agreement was signed between Myanmar and Bangladesh that the former will accept the refugees back. In 2017, the approach was to give them emergency support — injured were provided emergency treatment, dry food was made available, temporary shelters made from bamboo were built. After two years, other agencies started building semi-permanent shelters. In 2019, the Bangladesh government resettled them on an island on the Bay of Bengal-- Bhasan Char-- a protected embankment where cyclone shelters and homes for refugees were built. About 25,000 have been relocated. But, the number is very low. To me, it seems like this problem will not be resolved very soon. The Bangladesh government wants to send them back to Myanmar, but the Myanmar government is creating roadblocks. They aren't agreeing for the refugees to go back to their own villages after five years-- we can see that there's a long way to go.

Dr Taifur Rahman: The future remains uncertain. Bangladesh government should continue communication with Myanmar. Influential countries like the US and UK should push for a positive outcome. They have been in a camp for five years now. I have asked the refugees-- they want to return to their homeland. They are looking for a security for their basic rights. They have been denied the right to education, marriage, and to purchase land in Myanmar. Even if they are granted permission to go back, they will be isolated. These internal issues need to be resolved. Currently, the military hasn't been playing a positive role, especially since they've taken over. About 5,000 refugees currently live between the borders in no man's land. They come under the radar of the army firing every now and then. Besides, Bangladesh is a developing country and does not have the ability to absorb these refugees. So they continue to negotiate with international authorities for repatriation of the Rohingya refugees. Countries like India and China too need to put pressure on Myanmar to take back the refugees

Won't they be prosecuted if they go back?

Masum Mahbub: If you ask this question to a Rohingya refugee, definitely, they will say yes-- they have the fear. Even if they go back, the Myanmar government will just put them in another shelter and not let them back to where they were living, not to their homes. So, there is a possibility that they won't be treated properly.

What about refuge in other countries like US, Canada or Australia?

Masum Mahbub: That is very complicated. The host country needs to come forward. Let's say Canada, because they are refugee friendly. Canada should take the initiative and say they are accepting these many refugees. They, on their own, cannot go anywhere else. There's a system in place to accept refugees-- a country accepting refugees should come forth and say they will accept 5,000 refugees. And, if any country wants to accept the refugees, the first point of contact would have to be the UN- IOM (International Organization for Migration).

Dr Taifur Rahman: This is a difficult question to answer. The US, clearly isn't interested. The whole issue is a grey area. There is some prejudice because of their religion-- all Rohingyas are Muslim.

Please tell us about the work you have been doing.

Masum Mahbub: OBAT Helpers is a humanitarian organisation based in Indiana, US. We have been working in Bangladesh with internally-displaced population in seven cities. In 2017, when Rohingya refugees started coming, we responded with dry food and emergency medical treatment. When we saw more refugees coming, we started a clinic where we have been serving 40,000 patients each year. In addition, we have been giving basic numeracy and language education. We have a learning centre that teaches 1,000 children. We provide a platform to enhance women's skills in activities like sewing and other income-generating tasks. We have local partners in Cox's Bazaar for the same.

I really hope it is possible to send the refugees back to their homeland. There are about 1.2 million refugees, and about 50,000 children are being added to the number each year.

How do you manage violence in the camp?

Masum Mahbub: The law and order situation in the camps is controlled by Bangladesh. Violence is common in any refugee camp, and one cannot control everything. But this is a grey area. There are incidents that put the locals in vulnerable situations. About 50 per cent of the refugees are children, and out of the adult population, a lot of them have no work-- so they tend to get involved in illegal activity. Managing 1.2 million people in one area is not an easy task. But, from what I have heard, Rohingya camps are the best-managed camps, and the credit goes to the Bangladesh government.

Dr Taifur Rahman: There isn't as much crime in the camps. Most of it is controlled efficiently by the local police. Yaba is a problem though. Youngsters are made to smuggle yaba (a popular methamphetamine) from across the Myanmar border into Bangladesh. The youngsters find it profitable to deal in Yaba. This can create long-term problems.

Currently they aren't able to work in Bangladesh, right?

Masum Mahbub: No, they are not able to work in Bangladesh. They are in a vulnerable state-- Bangladesh government wants to isolate them. But Myanmar government says they are Bangla citizens, which isn't true, despite some similarities due to the shared border. Also, Cox's Bazaar area is one of the poorest economic area. Even the local community finds it hard to find work. If the refugees are allowed to go out and work, it will create another social problem.

Dr. Taifur Rahman: About 25,000 refugees who have been relocated to Bhasan Char island have a decent means of livelihood. They have land to cultivate on, they can raise goats for milk and meat. And, since it is an island, they can fish. As for the refugees at Cox's Bazaar, they are being given training to improve their skills—like sewing; some of them are studying language and numeracy. They are working as volunteers in NGOs or take up teaching or grow crops on the roofs of their temporary homes. But yes, they cannot legally work in Bangladesh.

What, according to you, is the best solution?

Masum Mahbub: According to me, repatriation is the best idea. Relocating 1.2 million people to another place will be very difficult. Moreover, 99 per cent of the Rohingyas I talk to want to go back to their homes and not to Australia or Canada. But, they should be able to go back and live with dignity like a human being.

Dr Taifur Rahman: Right now, we have counselling projects all over the camp as a lot of them have been here for such a long time and are living a life no one wants to live. They are learning things, but they want to go back their homeland. Cooperation from neighbouring countries like India and China is vital for this. International organisations like the UN also need to act. The new generation—children born in these camps and those who came to the camps as kids have reached adolescence now-- they face uncertainty.

Don't you think that property of these refugees would have been destroyed or vandalised? Wouldn't they have to rebuild their lives even if they go home?

Masum Mahbub: Yes, the refugees have said a lot of their properties have been bulldozed. But, there are international agencies and NGOs helping them set a life here; they can continue the work there— help the Rohingyas rebuild their lives in their homeland. In my opinion, the work will continue and it has to.