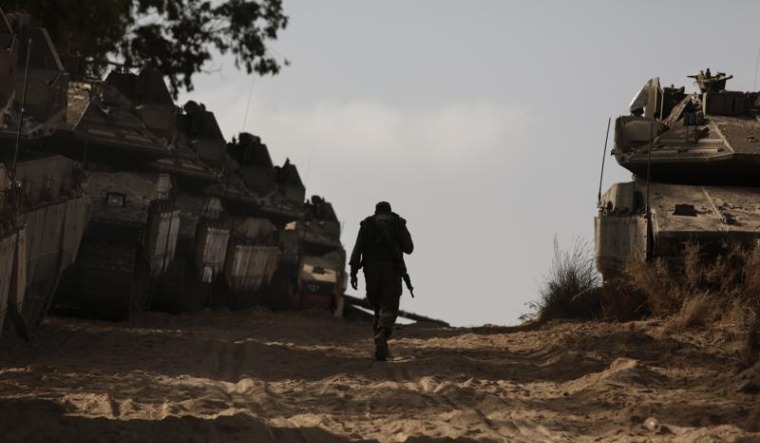 An Israeli soldier near the Gaza Strip | AP

Israeli troops killed a Palestinian militant during a firefight on Wednesday in the occupied West Bank, the Palestinian Health Ministry said.

The violence erupted after Israel carried out an arrest raid in a refugee camp near the city of Tubas.

The Israeli military said it carried out arrest raids across the West Bank as part of a months-long crackdown on Palestinian militants.

It said its soldiers came under fire during the arrest of a wanted person in the Faraa refugee camp in the northern West Bank.

The Palestinian Health Ministry said 21-year-old Younis Ghassan Tayeh died from a bullet wound to the chest. The Israeli military said Tayeh was shot while throwing firebombs at troops.

The Palestinian Islamic Jihad militant group issued a statement claiming Tayeh as one of our martyrs".

Israel has been conducting near-daily arrest raids in the West Bank for months, which were prompted by a spate of deadly attacks against Israelis earlier this year that killed 19 people.

Dozens of Palestinians have been killed during that time, many of them militants or people involved in clashes. But civilians have also been killed, including one who inadvertently drove through a battle zone.

A veteran Al Jazeera journalist covering the raids also was killed in May.

Israel on Monday said its investigation into the deadly shooting of Al Jazeera journalist Shireen Abu Akleh found there was a high probability an Israeli soldier had mistakenly killed her during a raid.

She had been wearing a helmet and a vest that clearly marked her as a member of the media.

Israel says the arrest raids are meant to dismantle militant networks that have embedded themselves. The Palestinians say the operations are aimed at maintaining Israel's 55-year military occupation of territories they want for an independent state.

Israel captured the West Bank, along with east Jerusalem and the Gaza Strip, in the 1967 Mideast war and the Palestinians seek those territories for a future state.