Were the blasts caused by Ukrainian-made long-range weapons? 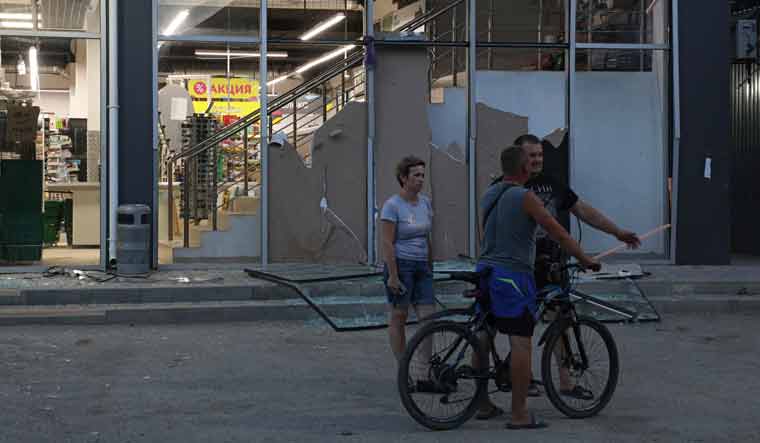 In what might mark an escalation in the ongoing Russia-Ukraine war, powerful explosions rocked a Russian air base in Crimea, killing one person. Russia's defence ministry denied the Saki base on the Black Sea had been shelled and said instead that munitions had blown up there. However, Ukraine’s President Volodymyr Zelenskyy declared in a video after the blast that the war “began with Crimea and must end with Crimea", and called for the liberation of the region from Russian control.

Videos posted on social networks showed sunbathers on nearby beaches fleeing as huge flames and pillars of smoke rose over the horizon from multiple points, accompanied by loud booms. Crimea Today News said on Telegram that witnesses reported fire on a runway and damage to nearby homes as a result of what it said were dozens of blasts.

Russia's state news agency Tass quoted an unidentified ministry source as saying the explosions' primary cause appeared to be a violation of fire safety requirements. The ministry said no warplanes were damaged.

Ukraine's defence ministry said sarcastically on Facebook: "The ministry of defence of Ukraine cannot establish the cause of the fire, but once again recalls the rules of fire safety and the prohibition of smoking in unspecified places."

A presidential adviser, Oleksiy Arestovych, said cryptically in his regular online interview that the blasts were caused either by a Ukrainian-made long-range weapon or were the work of partisans operating in Crimea.

During the war, Russia has reported numerous fires and explosions at munitions storage sites on its territory near the Ukrainian border, blaming some of them on Ukrainian strikes. Ukrainian authorities have mostly remained mum about the incidents. If Ukrainian forces were, in fact, responsible for the blasts at the air base, it would be the first known major attack on a Russian military site on the Crimean Peninsula, which the Kremlin annexed in 2014.

The Ukrainians in recent weeks have been mounting counterattacks in Russian-occupied areas of southern Ukraine while trying to hold off the Kremlin's forces in the industrial Donbas region in the east.