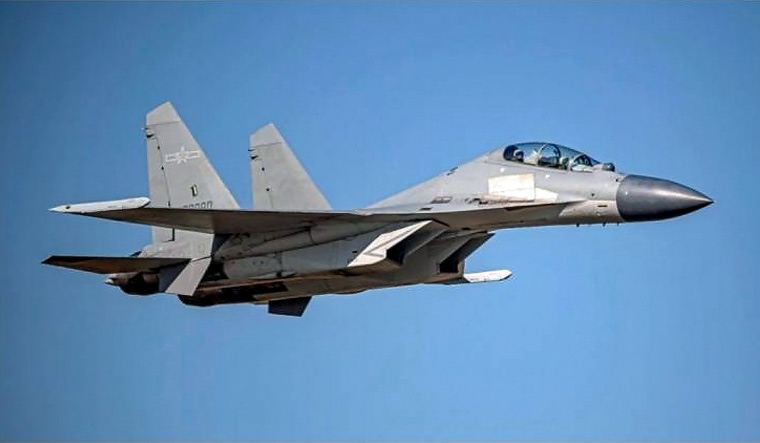 In this undated file photo released by the Taiwan Ministry of Defense, a Chinese PLA J-16 fighter jet flies in an undisclosed location | AP

China, on Wednesday, sent 27 warplanes into Taiwan's air defence identification zone. Beijing, in giving a preview into what might be coming for the island nation, sent 22 of the jets across the median line of the Taiwan Strait, according to Taiwan's Defense Ministry. This has been the most number of Chinese war aircraft crossing the median line after Taiwan started publicly releasing information about China's incursions into its ADIZ about two years ago.

The incursions occurred as US House Speaker Nancy Pelosi visited Taiwan despite warnings from China. Pelosi is the highest-level US official to visit Taiwan in 25 years. As Pelosi wrapped up her visit, Beijing summoned the US ambassador to China Nicholas Burns and warned that the US will pay a price for its mistakes. China has begun military drills around Taiwan to protest Pelosi's visit. Secretary of State Antony Blinken on August 1 said that whether Speaker Pelosi visited Taiwan or not was entirely up to her. Blinken also urged China to act responsibly if Pelosi proceeds with the visit.

The Chinese Defense Ministry announced that it plans to conduct air and sea military exercises—long-range live fire exercises around Taiwan. Beijing also released a map of six zones around the island where it plans to conduct the exercises. Ships and aircraft have been warned to stay out of the areas during the drills, a CNN report reads.