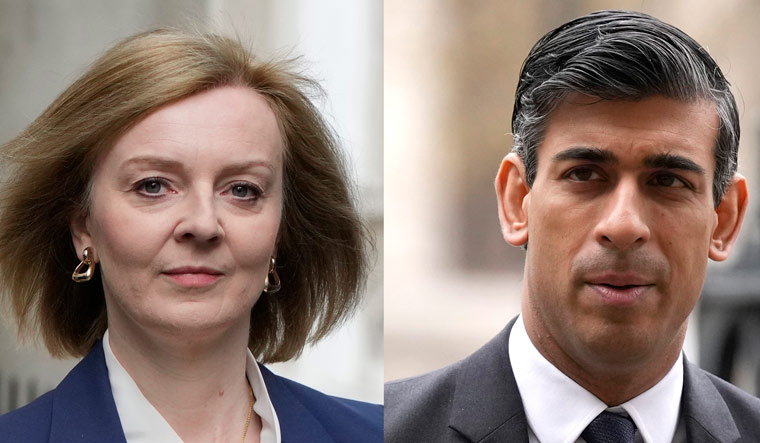 It has been dubbed a bruising blue on blue battle, a reference to attacks within different factions of the governing Conservative Party as they turn on each other in the leadership contest to replace Boris Johnson as Tory leader and British prime minister.

Ahead of a key head-on televised BBC debate between the two finalists, former Chancellor Rishi Sunak and Foreign Secretary Liz Truss on Monday night, the tone of the contest has been getting increasingly fierce.

Culture Secretary Nadine Dorries, a Johnson loyalist who is backing Truss in the race, took to Twitter on Monday morning to quote tweet a Daily Mail' report on Sunak's GBP 3,500 bespoke suit and Prada shoes a jab at trying to paint him as distanced from the cost-of-living crisis facing the British public at large.

Liz Truss will be travelling the country wearing her earrings which cost circa GBP 4.50 from Claire Accessories, said Dorries, a reference to an affordable high street accessories store. Meanwhile Rishi visits Teeside in Prada shoes worth GBP 450 and sported GBP 3,500 bespoke suit as he prepared for crunch leadership vote, she said.

It prompted angry responses from some Tory activists and ministers warning that they were all on the same team and that such personal attacks would be punished at the next general election expected around 2024.

Probably worth remembering that on current trajectory we are out of power in two years' time. The puerile nature of this leadership contest is embarrassing. Time to raise the standards, tweeted Cabinet Office minister Johnny Mercer.

Sunak's personal wealth and that of wife Akshata Murty the daughter of Infosys co-founder Narayana Murthy, has been referenced repeatedly in a race in which the British Indian former minister has admitted he is the underdog. He addressed the issue head-on in the last TV debate, when he spoke of his pride in what his parents-in-law had achieved with Infosys.

My father-in-law came from absolutely nothing, just had a dream and a couple of hundred pounds that my mother-in-law's savings provided him, and with that he went on to build one of the world's largest, most respected, most successful companies that by the way employs thousands of people here in the United Kingdom, he said last week.

"It's an incredibly Conservative story, actually it's a story that I'm really proud of and as Prime Minister I want to ensure that we can create more stories like theirs here at home, he said.

However, from being photographed using a GBP 180 smart mug and sporting GBP 95 branded sandals when he was Chancellor to the latest attacks on his expensive clothing, the issue has remained dominant for a section of the UK media and the opposing camp.

Meanwhile, Sunak has sought to focus on issues such as curbing inflation on a crisis footing and questioned his opponent's promises of unfunded tax cuts.

Both candidates have styled themselves as Thatcherites in an effort to appeal to the staunch right of the Tory party, with both staking claim to the legacy of the former Prime Minister who unleashed post-war reforms for the UK. They have also vowed a tough approach to tackle uncontrolled immigration and China's aggressive global strategies as part of this strategy.

With social media the dominant battleground for both camps, Sunak and Truss are deploying different online strategies to woo voters with the former referencing his Indian heritage and immigrant success story and the latter more focussed on her role on the international stage as a Cabinet minister. A striking common ground is the first-name basis on which they are appealing to the electorate, with Ready4Rishi and Liz for Leader campaign taglines.

However, unlike his popularity within the Tory parliamentary party which won him an easy ride to be one of two finalists in the race to become the first Indian-origin incumbent at 10 Downing Street, Sunak's camp is aware that winning over the votes of the wider Tory membership of an estimated 180,000 voters is a tougher stretch of the race which concludes on September 5.